Trail Blazer
The Trail Blazer was a deluxe all-coach train, inaugurated between New York and Chicago via Pittsburgh, Pennsylvania on 17:25 schedule operated by the Pennsylvania Railroad. The Trail Blazer was one of the first all-coach trains (along with the Santa Fe's El Capitan) to provide premium services comparable to a Pullman train. Two days before service began, the Trail Blazer's equipment, including streamlined P70 coaches, a twin-unit diner, and an observation car designed by Raymond Loewy  were exhibited at Penn Station, made press runs to Philadelphia, and returned to New York on July 28 after display at Philadelphia. On July 28, 1939, service officially began, and was an immediate success. On July 29, 1939, the first eastbound Trail Blazer arrived at New York World's Fair for special ceremony. Eastbound trips continued to run direct to the Fair.

According to LIFE magazine, reservations were made as far as 6 weeks in advance during the first month of service. The PRR felt very pleased with the performance of this new coach-only train. Instead of the eight-car consist originally planned, the train had to carry an average of 10. The number of passengers on the Trail Blazer frequently exceeded those of the Pennsylvania's better-known train, the Broadway Limited and PRR's rival, New York Central's coach-only Pacemaker. New York Central's Pacemaker offered identical service and schedule but with ordinary heavyweight equipment inaugurated on same day. The Trail Blazer was name first used for East St. Louis-Pittsburgh preferred freight VL-6 in 1927. The Trail Blazer carried about 132,000 passengers in the first year and 175,000 in the second. In 1940-41 it sometimes operated in second and third sections.

According to the PRR's roster on 26 November 1943, the consist of Train No. 77 the Trailblazer had 14 rebuilt heavyweight passenger cars with streamlined features including one PB70ER passenger baggage car, nine P70KR coaches, two D70CR and D70DR Diner, one P70GSR coach, and one POC70R coach-observation. Historical photographic and films evidence showing that PRR S1 No. 6100 "The Big Engine" was the preferred engine of this popular, highly profitable (It carried 35 times more passengers than Broadway Limited in 1939, gross revenue equal to $2,260,000 in 1940 or $40,416,960 today). The Tail Blazer was one of the longest and heaviest passenger train (more than 1,000 tons) during the heyday of PRR's passenger services in early 40s. Besides PRR S1 No. 6100, streamlined K4s, PRR S2 direct-drive steam turbine engine No. 6200 and PRR T1's were assigned to haul the train occasionally.

In 1948, PRR re-equipped the Trail Blazer with new EMD E8 Diesel engines, new lightweight P85b 44-seat coaches and new twin-unit dining car built by PRR's own shop and ACF. In 1951, due to rapidly declining demand, the Pennsylvania combined the Trail Blazer and General into one service. However, their timetable continued to distinguish the two trains until July 26, 1959, when the Trail Blazer's name was removed. 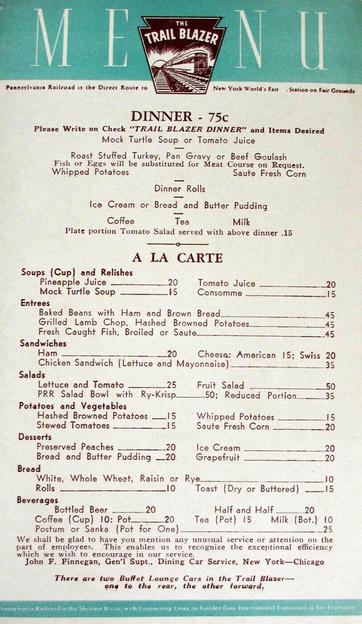 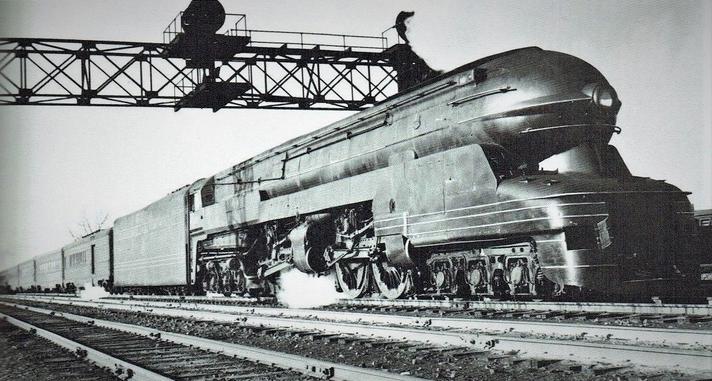 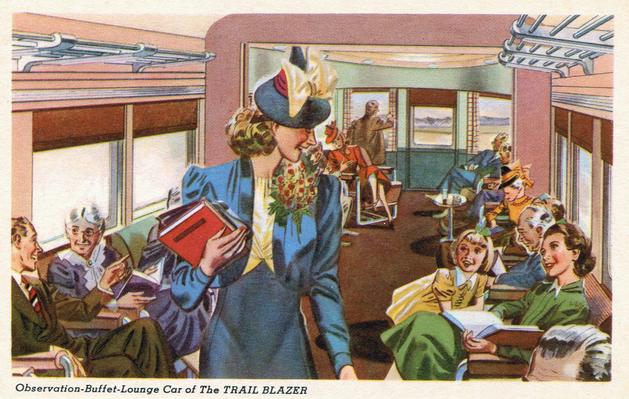