Background
1934 had seen the introduction of lightweight streamlined trains in the United States. The railroads hoped these futuristic trains would stem the tide of customers turning away from train travel. The Chicago and North Western Railway had not invested in this new technology, but decided to upgrade track and motive power for higher speeds with heavyweight, steam-powered trains.

C&NW made their first upgrades in 1934 along the 85-mile line between Chicago and Milwaukee, Wisconsin, introducing the 90-minute Pacemaker service to compete with the Chicago, Milwaukee, St. Paul & Pacific Railroad (Milwaukee Road) which introduced a similar train. Attention then turned to faster trains to Saint Paul: The Chicago, Burlington and Quincy Railroad ran a Zephyr demonstration train between Chicago and the Twin Cities that summer with the intent to run regular service the next year, and the Milwaukee Road introduced similar plans.

While C&NW's existing Chicago to St. Paul Viking train went through Madison, taking about 12 hours, the railroad focused on a more rural northern route running west from Milwaukee. The railroad also upgraded its locomotives and passenger cars. Four C&NW Class E-2 4-6-2 Pacific locomotives built by American-Schenectady in 1923 were converted to run on oil rather than coal and had other upgrades to help them run at high speed, becoming Class E-2-a engines. The passenger cars got air conditioning and improved suspension parts for a smoother ride.

Coach car and stewardess, circa 1940s. 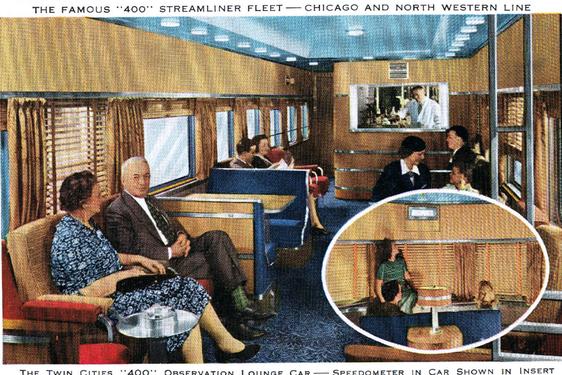 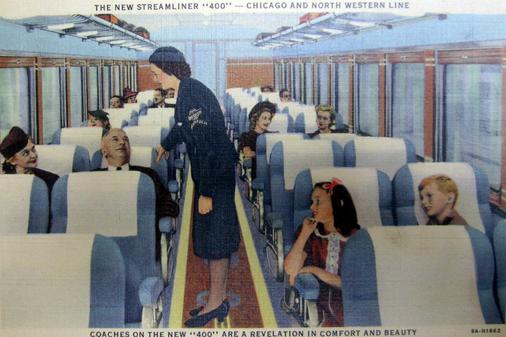 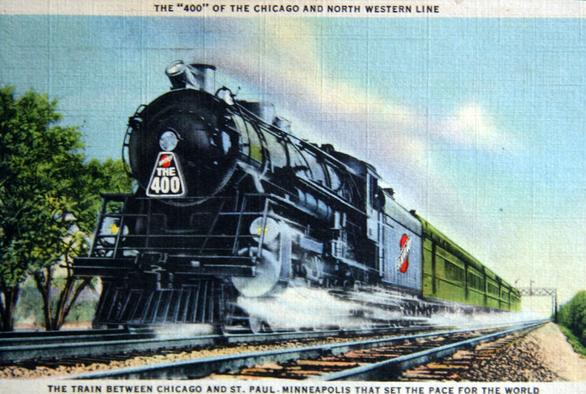 The Twin Cities 400
The 400, later named the Twin Cities 400, was a named passenger train operated by the Chicago and North Western Railway between Chicago and Saint Paul, with a final stop in Minneapolis. The train took its name from the schedule of 400 miles between the cities in 400 minutes, and was also a nod to "The Four Hundred Club", a term coined by Ward McAllister to refer to the social elite of New York City in the late 19th century. It was an express train with limited stops between Chicago and the Twin Cities. It ran from 1935 to 1963 and spawned a number of "400" trains. 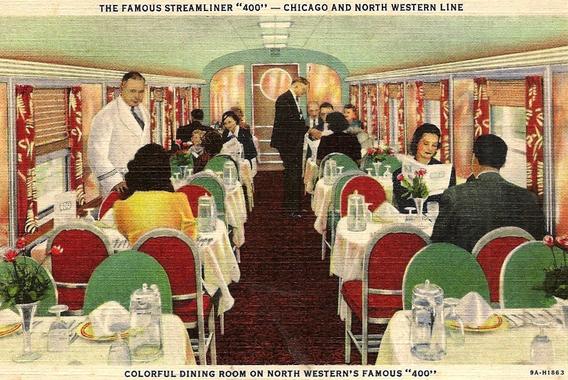 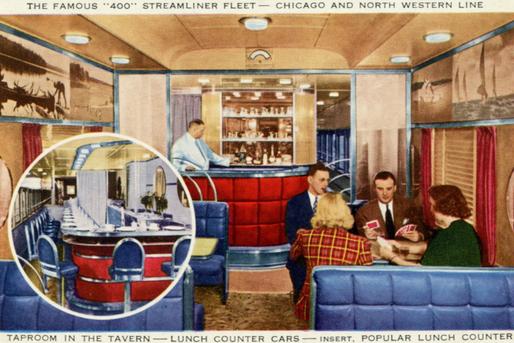 Service history
A test run was made on December 30, 1934, but the regular train started on January 2, 1935. Time dubbed the 400, "the fastest train scheduled on the American Continent, fastest in all the world on a stretch over 200 miles. While the 400 implied "400 miles in 400 minutes", Chicago to St. Paul was 408.6 miles in 420 minutes (7 hours), with the last leg to Minneapolis taking another 30 minutes. The 400s had priority over all other trains; the employee timetable specified that "Freight trains, transfer trains, and switch engines must clear the schedules of Nos. 400 and 401 by fifteen minutes." Other 400 trains would receive similar instructions in later years, and the rule remained in effect for most of the Twin Cities 400's existence.

On the first day the train reached 91 miles per hour. On April 28 the schedule was shortened by 30 minutes to reach the mile-a-minute pace the line promised, and matching the 6½-hour pace of the newly introduced Milwaukee Road Hiawatha and the Burlington's Twin Cities Zephyr. This included a 75-minute schedule between Chicago and Milwaukee, averaging 68 mph there and 63 mph overall. One day in late 1935 the 400 needed to make up time and reached 108 mph. Later, streamlined diesel trains were said to reach 112 mph.

From 1950 to 1955 the train ran its shortest schedule, 6¼ hours between St. Paul and Chicago. In 1952 the railroad installed automatic train stop along the eastern half of the route from Chicago to Wyeville due to regulations from the Interstate Commerce Commission. This allowed the train to run at 95 to 100 mph there, although the western part of the line did not get upgrades and was limited to 79 mph. The pace reverted to a 6½-hour schedule in 1955 and in 1960 to the 7-hour pace established in 1935. C&NW ceased running the Twin Cities 400 in 1963 and all intercity passenger service on C&NW ended with the formation of Amtrak in 1971. Today the only Twin Cities to Chicago train is the Amtrak Empire Builder, which takes more than 8 hours.

Equipment
The 400 was notable for fast trains of its day in that it originally ran with rebuilt or upgraded, rather than new equipment. This stood in stark comparison to the Milwaukee Road's Hiawatha and the Burlington Zephyrs, each of which first ran with brand new locomotives and cars. Each 400 train required two steam locomotives, which were swapped partway through the trip, primarily because some grease fittings on the train could not withstand the entire journey at high speed.

The steam locomotives were upgraded to feature a 45° lamp on top of the boiler just ahead of the smokestack. These lights were intended to announce the approach of the train and could be seen for a great distance in rural areas. In 1937, one locomotive was equipped with a prototype Mars light, the first ever put into use. The three-million candela lamp had a gyrating reflector which traced a figure-8 pattern ahead of the engine.

C&NW updated the train in 1939 with two pairs of EMD E3A locomotives and lightweight streamlined passenger cars. Two engines were required because the diesels didn't have as much power as the older steam locomotives. However, they were extremely reliable, with only one major breakdown in the first two years of service. These were followed by E6 locomotives in 1941, and E7s in 1947. E8s saw some service in the 1950s, though they were initially purchased for other routes.

The train originated at the Chicago and North Western Terminal (now the Ogilvie Transportation Center) on Madison Street in Chicago. It ran to Milwaukee on the lakefront commuter line and stopped at the Lakefront station on Wisconsin Avenue. It ran to Wyeville, Wisconsin where it followed the Omaha Road route to St. Paul. It terminated at Saint Paul Union Depot, with a short run to the Minneapolis Great Northern Depot over the Stone Arch Bridge.

The Viking was another named C&NW passenger train that followed a slightly different route through Madison, Wisconsin, and made all the local station stops between Chicago and St. Paul. It took roughly 12 hours.

Name
Along the routes of the Twin Cities 400 and its sister trains, there were a number of bars titled "400 Club", paying homage to the train and the social status.