Twin Cities Zephyr
The Twin Cities Zephyr was a streamlined passenger train on the Chicago, Burlington and Quincy Railroad (CB&Q). It was the second Zephyr service introduced by CB&Q after the record-setting Denver–Chicago "dawn to dusk dash" of the Pioneer Zephyr trainset. The service ended in 1971 with the inauguration of Amtrak.

The train competed with the Chicago and North Western's Twin Cities 400 which ceased operation in 1963, and the Milwaukee Road's Twin Cities Hiawatha, which, like the Zephyr, ended with the coming of Amtrak in 1971. The CB&Q trains went west from Chicago to the Mississippi River and along that river to Saint Paul, while the North Western and Milwaukee Road trains traveled via Milwaukee.

History
Two three-car trainsets were delivered in April 1935 and proved too small; a second pair of six-car trains with matching locomotives were ordered as replacements. The new trainsets were put on display before they entered service.

The second pair of Twin Cities Zephyrs entered service on December 18, 1936 as the Morning Zephyr and the Afternoon Zephyr. On the first run the two trainsets departed Chicago simultaneously on parallel tracks with 44 pairs of twins as a publicity stunt.

In 1935 Zephyrs were scheduled to cover 431 miles between Chicago and St Paul in six and a half hours, later reduced to six hours and 15 minutes. At first each trainset made one one-way trip a day, but in July 1935 each was making a round trip a day, leaving each terminal at 8:00 AM CST and returning at 10:59 PM. In 1940 the westbound Twin Cities Zephyr took six hours to travel from Chicago to Saint Paul, a start-to-stop average of 71 miles per hour. For several years in the 1950s the schedules along the Mississippi from East Dubuque, Illinois to Prairie du Chien, Wisconsin and from Prairie du Chien to La Crosse were the fastest in the world, and in 1964 the Morning Zephyr had the fastest station-to-station time in the United States between Aurora and Rochelle, Illinois. All three runs were made at over 80 miles per hour from start to station stop. By 1964 the timing from Chicago to Saint Paul had relaxed by five to ten minutes, but by 1970, the last full year of service, the journey took seven hours.

The Burlington handled five passenger trains each way between Chicago and the Twin Cities, four of them in the daytime: the morning and afternoon Zephyrs and the premier trains of the Burlington's two owners, the North Coast Limited of the Northern Pacific Railroad and the Empire Builder of the Great Northern Railway, both of which ran to the West Coast. Although the railroad's passenger service as a whole carried more passengers in 1964 than in 1949, in the latter year the four daytime trains along the Mississippi all operated at a loss. To save money, trains were often consolidated in off-peak times starting in 1960, and eventually the four daytime trains were reduced to two, with the Afternoon Zephyr taking the Empire Builder and North Coast Limited to the Twin Cities, and the Morning Zephyr taking the two trains to Chicago.

The Twin Cities Zephyr ran for 36 years until 1971 when Amtrak took over most intercity passenger trains in the United States.

Equipment
The first pair of three-car Twin Zephyr trainsets were very similar to the original Pioneer Zephyr, and were articulated trains riding on four trucks. This pair, delivered in April 1935, quickly proved too small to cope with passenger loads, and a second pair of six-car trains (soon expanded to seven cars) was delivered in November 1936. These trainsets also were articulated. One was called "The Train of the Gods" and the cars were named for mythological figures Apollo, Cupid, Jupiter, Mars, Mercury, Neptune, and Vulcan. The other trainset was known as "The Train of the Goddesses" and the cars were named Ceres, Diana, Juno, Minerva, Psyche, Venus and Vesta. Motive power for the second pair of trains was originally shovel-nose diesel locomotives 9904 (Pegasus) and 9905 (Zephyrus).

On its way into Chicago on the evening of April 3, 1947, the "Train of the Goddesses" traveling at 75 miles per hour was derailed in Downers Grove, Illinois by a tractor that fell into its path from a freight train on an parallel track. Two of the Zephyr's cars smashed into an unoccupied brick railroad station. Sadly, many people were injured in the derailment and two passengers lost their lives.

After a third pair of trains were delivered in 1947, the second pair of trains were reassigned as the Nebraska Zephyrs. The third sets (typically seven cars) were the first dome streamliner trains, after a company-built modified coach dome car was tested starting in 1945. The 1947 sets originally consisted of a baggage-refreshment car, four vista dome coaches, a dining car and a dome parlor observation car. They served as a prototype of the 1949 California Zephyr which had sleeping cars in addition. 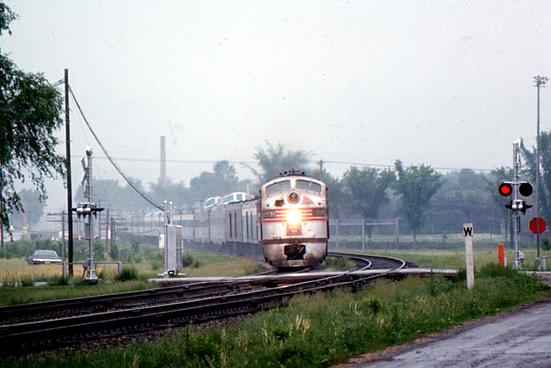 The Twin Cities Zephyr at La Crosse, Wisconsin in 1939. 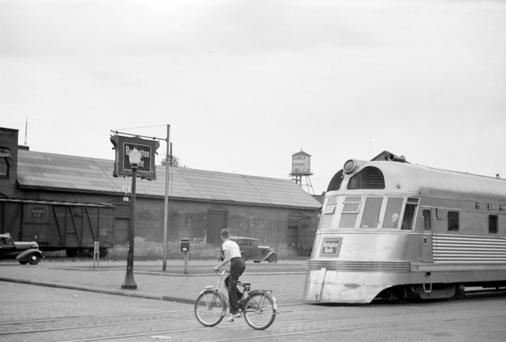 The Burlington Zephyr at Prairie du Chien during its last full year of service, 1970.