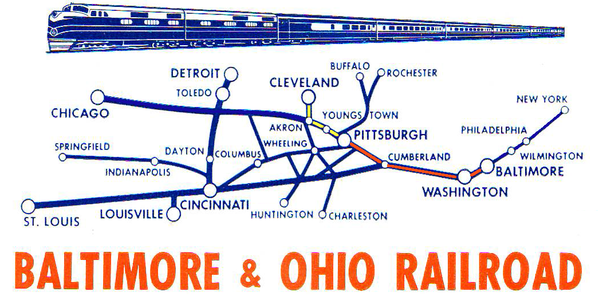 Route of the B&O Washingtonian, in orange (P&LE and Erie Railroad Steel King in yellow).

Washingtonian
The Washingtonian was one of two daily American named passenger trains operated by the Baltimore and Ohio Railroad (B&O) during the 1940s–1950s between Baltimore, Maryland and Cleveland, Ohio, via Washington, D. C. and Pittsburgh, Pennsylvania. It was the last B&O long-haul passenger train to be powered by a steam locomotive from the venerable railroad's namesake city.

Inaugurated on April 27, 1941, the Washingtonian was primarily a daytime train with a morning departure, in contrast to B&O's other train on the route, the Cleveland Night Express. Between Pittsburgh and Cleveland, the Washingtonian's cars left B&O rails and were coupled to the Steel King train of the Pittsburgh and Lake Erie Railroad (P&LE) to Youngstown, Ohio, where the Erie Railroad handled the train to Cleveland.

Schedule and equipment
The westbound Washingtonian, operating as Train # 21, left Baltimore at 9:00 a.m., arriving in Cleveland twelve hours later at 9:00 p.m. Eastbound, the Washingtonian was designated Train No. 22. The train's consist was typically a pair of baggage/express cars, a Railway Post Office car, three air conditioned coaches, and a combination parlor-diner-lounge car. In the late 1940s, as many as six additional coaches were added on weekends to accommodate the throngs of East Coast-bound passengers boarding the train at the numerous Appalachian Mountain communities along the B&O's right-of-way.