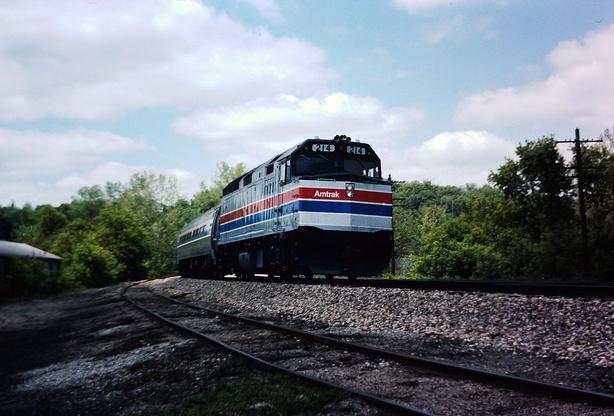 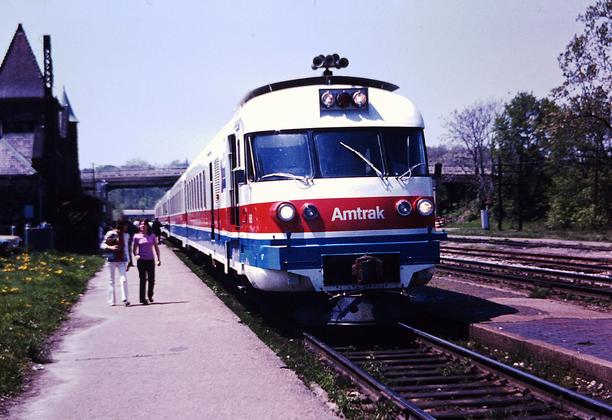 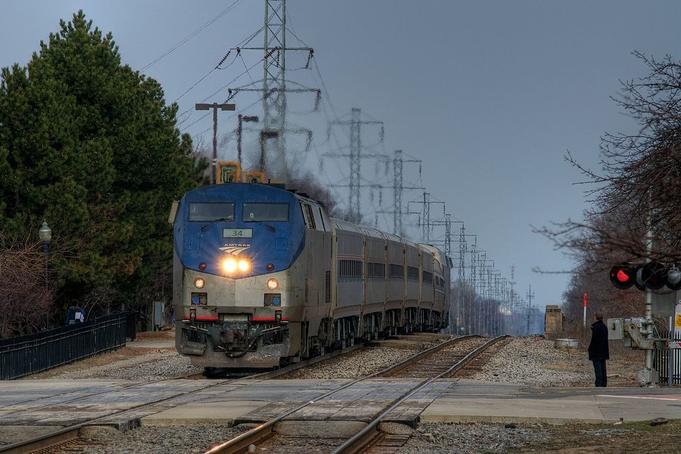 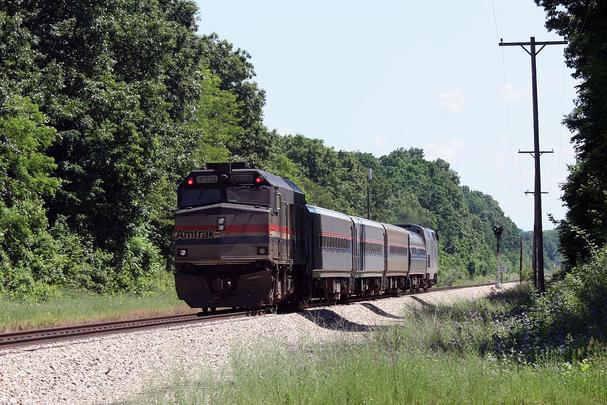 The Turboliner's replacement - an EMD F40PH with Amfleet coaches - in 1976.

The eastbound Wolverine at Royal Oak station in March 2011.

The Wolverine
The Wolverine is a higher-speed passenger train service operated by Amtrak as part of its Michigan Services. The 304-mile (489 km) line provides three daily round-trips along the Pontiac–Detroit–Chicago route. It carries a heritage train name descended from the New York Central (Michigan Central).

History
Before Amtrak's takeover of most private-sector passenger service in 1971 the Wolverine was one of three trains which operated over the Michigan Central route between Chicago and Detroit. Under Penn Central operation it continued through South-Western Ontario (Canada) to Buffalo, New York. Amtrak retained two trains (the other was the renamed St. Clair) and truncated the operation to Detroit but otherwise changed little. In April 1975, Amtrak introduced French-built Turboliner equipment to the Michigan route and added a third round-trip. A pool of three Turboliner trainsets served the route, and the three round-trip pairs were numbered 350—355, train numbers which are still in use today. Amtrak dropped the individual train names and re-branded all three Turboliner, in common with similar services to St. Louis, Missouri and Milwaukee, Wisconsin. The new equipment led to massive gains in ridership, topping 340,000 in 1975 and 370,000 in 1976.

The Turboliners became a victim of their own success. Although fast (and flashy), they were unable to reach their design speed of 125 miles per hour (201 km/h) because of the poor quality of the Penn Central track in Michigan. The five-car fixed consists had a maximum capacity of 292 passengers, which was often not enough. Starting in March 1976 Amtrak began replacing some of the Turboliners with conventional equipment, including new Amfleet coaches. Individual names returned to the corridor, with the heretofore unnamed third train becoming the Twilight Limited. The last Turboliners left the corridor in 1981.

Amtrak extended the Wolverine and Twilight Limited to Pontiac on May 5, 1994. With this change service began at a new station in Detroit's New Center. Although the Michigan Central Station in Corktown, Detroit had closed on January 6, 1988, trains continued to stop at a temporary platform just east of the old station. Besides Pontiac, new stations were opened at Royal Oak and Troy. The Lake Cities also began serving Pontiac after the end of Toledo service in 1995.

Due to the increased ridership on these trains, Amtrak tested an additional Chicago-Kalamazoo Wolverine frequency September 2 to September 7, 2010. This was done to determine all that would be involved in operations should Amtrak decide to initiate such service in the future.

Higher-speed operation
The federal government considers high-speed rail service to be rail service which at any time reaches the speed of 110 miles per hour (180 km/h) or higher. In 2006 the Detroit–Chicago corridor was designated by the Federal Railroad Administration as a high-speed rail corridor and in October 2010, the State of Michigan received US$150 million from the federal government to increase track speeds to 110 mph (180 km/h) between Kalamazoo and Dearborn. In 2016, work to allow Higher-speed operation on 41 miles of track between Battle Creek and Jackson, including "...replacing 26,000 railroad ties, repairing or installing 15 track switches, realigning or modifying 29 railroad curves, repairing 23 railroad grade crossings and improving road profiles at crossings", was completed.

Amtrak owns the 97-mile (156 km) stretch of the Wolverine's route from Porter, Indiana to Kalamazoo, Michigan and it is the longest segment of track owned by Amtrak outside of the Northeast Corridor. Starting in January 2002 Amtrak began track improvements to increase the allowed speed along this section of track. Amtrak trains currently travel at top speeds of 110 mph (180 km/h) along this section of track.

In December 2012, MDOT completed its purchase from Norfolk Southern of 135 miles (217 km) of track between Kalamazoo and Dearborn. This will make it easier to maintain track and eventually upgrade it to 110-mile-per-hour (180 km/h) running by late 2017. As part of the purchase agreement, MDOT also agreed to double-track the line east of Ypsilanti.

Equipment
As of 2014, each Wolverine operates with two General Electric Genesis P42DC locomotives, 3-5 Horizon coaches, and an Amfleet cafe/business class car. In the winter, Superliners are sometimes used. The equipment pool for the Wolverines comprises 14 Horizon coaches and 3.5 Amfleet cafe/business class cars (one is shared with the Blue Water), split across three consists. The locomotives usually operate in a push-pull configuration, however sometimes both will be at the head end. Due to the FRA requirement of positive train control for operations above 79 mph, locomotives on the Wolverine are required to have Positive Train Control, supplied by Amtrak's Incremental Train Control System. Because of this modification the units are usually captive to the Michigan services.

Between 2016-2018 Michigan expects to take delivery of new bilevel cars which will displace the Horizons and Amfleets in regular service. In addition, in early 2014 the Michigan Department of Transportation issued a request for proposal aimed at acquiring additional passenger equipment for use between 2014-2017.

In September 2014, the state of Michigan reached an agreement with Talgo, a Spanish railcar manufacturer, to buy two trainsets for the Wolverine, at a cost of $58 million. The trains had been previously built for the state of Wisconsin, before plans for expanded passenger rail service in that state were canceled and the trainsets placed in storage. The new equipment will provide a substantial upgrade in passenger amenities over the Amtrak-owned railcars used on the route.

Michigan was also involved in a joint purchase with other states to purchase the new Siemens Charger locomotives. It is uncertain when these locomotives will enter service.