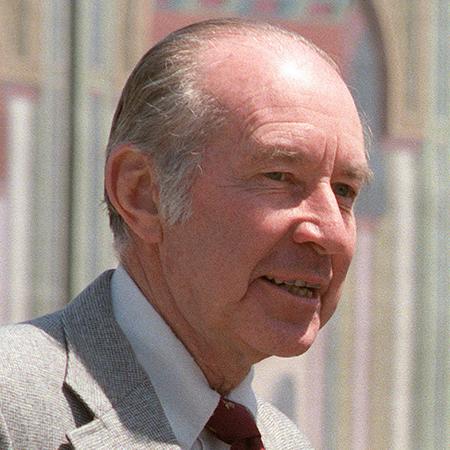 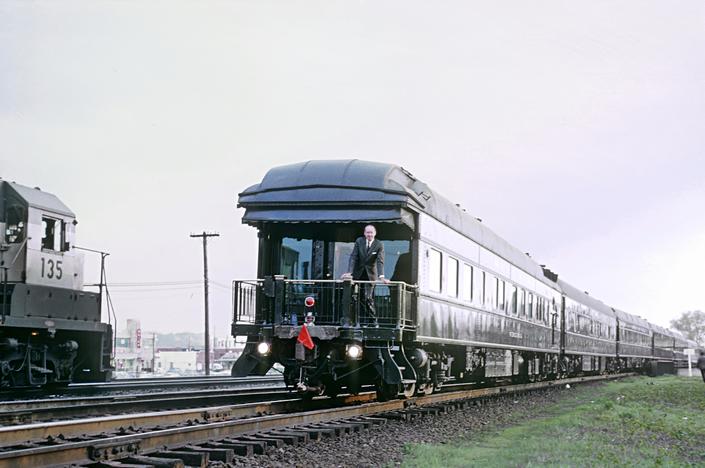 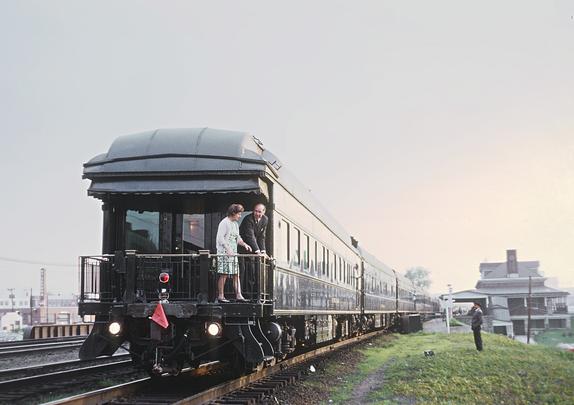 W. Graham Claytor Jr. at the dedication of the US Navy Memorial in 1984.

W. Graham Claytor, Jr.
William Graham Claytor Jr. (March 14, 1912 – May 14, 1994) was an American lawyer, naval officer, and railroad, transportation and defense administrator for the United States government, working under the administrations of three US presidents.

He is remembered for his actions as the captain of the destroyer escort USS Cecil J. Doyle (DE-368), during World War II which helped to save 317 lives during the USS Indianapolis tragedy. Over 30 years later, Claytor's moderate actions on behalf of the rights of female and gay service personnel as Secretary of the Navy were considered progressive for the time. He is also credited with a distinguished transportation career, including ten years as president of the Southern Railway and 11 years as the head of Amtrak, guiding the passenger railroad through a particularly difficult period in its history. He was named the Virginian of the Year in 1977.

Early life and career
Claytor was born in Roanoke, Virginia on March 14, 1912, and grew up in both Virginia and Philadelphia. He was the son of Gertrude Harris Boatwright Claytor, a lyric poet, and W. Graham Claytor (1886–1971), who was vice-president of Appalachian Power.

Career
World War II — USS Indianapolis tragedy
In 1940, soon after the start of World War II, 28-year-old Claytor attempted to enlist, but was initially rejected by the United States Navy as being too old. He finally joined under a special provision, based upon his previous experience in sports boating. He was assigned to the Pacific Theater.

Late in the war, Claytor became commanding officer of the destroyer escort USS Cecil J. Doyle on patrol in the Pacific Ocean. In August 1945, Claytor sped without orders to investigate reports of men floating in the water. As the Doyle approached the area at night, Claytor turned the ship's searchlights on the water and straight up on low clouds, lighting up the night, despite the risk of exposing his ship to possible attack by Japanese submarines. These actions facilitated the rescue of the survivors of the sunken cruiser USS Indianapolis.

The Indianapolis had been on a secret mission, and due to a communications error, had not been reported as overdue (or missing). An estimated 900 men survived the sinking, but spent days floating in life jackets trying to fight off sharks. While only 317 were rescued out of a crew of 1199 who were aboard the Indianapolis, Claytor's actions were widely credited by survivors with preventing an even greater loss of life.

Legal practice and Southern Railway
After World War II, he resumed practice of law in Washington DC. He became an officer of the Southern Railway in 1963, serving as president from 1967-1977. Notwithstanding his legal background, Claytor was known as an "operations" man, often riding the company's trains, monitoring and questioning performance. In contrast to his predecessor, D. William Brosnan, Mr. Claytor was an "employee's President," often chatting with the crews of the trains on which he rode, actively soliciting their suggestions on how to make the railroad run better. He carried this attitude with him during his later service as the President of Amtrak.

U.S. Government service
Claytor served as the Secretary of the Navy under President Jimmy Carter from 1977 to 1979. He is credited with leading the United States Navy into its first recognition of women's right to serve on ships and of rights of gays to leave the service without criminal records. His positions were considered by activists to be progressive for the time, leading to further progress years later in these controversial issues.

In 1979, he was appointed to the position of Deputy Secretary of Defense. While serving as Deputy Defense Secretary, Claytor's military assistant was General Colin Powell.

Amtrak
In 1982, Claytor came out of retirement to lead Amtrak. He was recruited and strongly supported by John H. Riley, an attorney who was also the head of the Federal Railroad Administration (FRA) under the Reagan Administration from 1983 to 1989.

Claytor maintained a good relationship with the U.S. Congress during his 11 years in the position. Within 7 years of being under Claytor's leadership, Amtrak was generating enough money to cover 72 percent of its $1.7 billion operating budget by 1989, up from 48 percent in 1981. This was achieved mainly through vigorous cost cutting and aggressive marketing. He is credited with bringing political and operational stability to the nation's passenger train network, keeping the railroad functioning properly despite repeated attempts by the administrations of Reagan and his successor George H.W. Bush to eliminate its funding.

Claytor retired from Amtrak in 1993.

Legacy and heritage
Claytor was named the Virginian of the Year in 1977. In 1989, he was named Railroader of the Year by Railway Age magazine.

He was the brother of Robert B. Claytor, who became president of Norfolk and Western Railway in 1981 and was the first chairman and CEO of Norfolk Southern after it was formed by merger with the Southern Railway System in 1982. Robert B. Claytor is best remembered by many railfans for reactivating Norfolk and Western Railway's steam program, which rebuilt steam locomotives J-611 and A-1218 at the Roanoke Shops at Roanoke, Virginia, and operated excursion trips. Claytor Jr. would occasionally take the throttle as engineer with his brother on the steam excursions.

At Amtrak's Washington, DC Union Station a passenger concourse was renamed "Claytor Concourse" in his honor.

"The Claytor Brothers: Virginians Building America's Railroad" is a semi-permanent exhibit at the Virginia Museum of Transportation in Roanoke, Virginia.