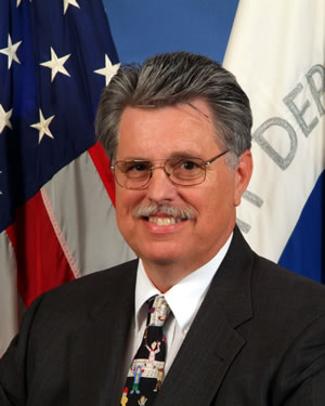 Joseph H. Boardman
Joseph Houston Boardman (December 23, 1948 – March 7, 2019) was an American transportation executive who served as President and CEO of Amtrak from 2008 to 2016. Boardman was the longest-serving Commissioner of the New York State Department of Transportation (NYSDOT) from July 1997 until resigning to head the FRA. Before taking over Amtrak, Boardman had been the Administrator of the United States Federal Railroad Administration. Boardman became the second-longest serving head of Amtrak, after W. Graham Claytor, Jr. in the 1980s. Railway Age magazine named Boardman as its 51st "Railroader of the Year" in its January 9, 2014, issue.

Early life and military service
Boardman was a lifelong resident of New York State, born the second of eight children born and raised on a dairy farm in Oneida County, which two of his siblings currently operate. In 1966, he volunteered for military service in the United States Air Force, serving in Vietnam from 1968 to 1969. Upon receiving an honorable discharge from the Air Force, he received a Bachelor of Science Degree in Agriculture Economics from Cornell University, and a Master of Science Degree in Management Science from Binghamton University.

Career
Early positions
He was in the transportation industry for more than forty years, with experience in city, county, and state government. In addition, he owned his own transportation management company. He was a former chairman of the Executive Committee of the Transportation Research Board (TRB) and Chair of the American Association of State Highway and Transportation Officials' (AASHTO) Standing Committee on Rail Transportation (SCORT).

Boardman was the longest-serving Commissioner of the New York State Department of Transportation (NYSDOT) from July 1997 until resigning to head the FRA.

Boardman headed the agency once the United States Senate confirmed him on May 3, 2005. Until his appointment with the FRA, Boardman was transportation commissioner for the state of New York. He began working as FRA Administrator on June 1, 2005. In December 2008, Clifford C. Eby was named acting administrator, replacing Boardman, who took over as head of Amtrak.

Railway rescues
Amtrak has worked closely with states using stimulus funds to purchase 130 next-generation bi-level cars and 35 next-generation diesel locomotives to upgrade corridor service in the Midwest, California, and Washington State. Other major orders for new equipment are in the works, marking the beginning of a renewal of Amtrak's aging fleet. Using stimulus funds from the American Recovery and Reinvestment Act of 2009, Amtrak rescued from the wreck yards more than 90 railcars, rebuilt them, and put them into service. The added capacity allowed Amtrak's passenger totals to grow by record numbers, more than one million year-over-year in 2010, 2011, and 2012, and revenues increased as well.

Boardman led an effort to augment and replace Amtrak's fleet of high-speed Acela Express trains with about 28 new trainsets. The company issued a RfP (request for proposals) in December, 2013. Offers were due by May, 2014, with negotiations likely to continue until the end of the year before a contract could be signed. The new trains would substantially increase capacity on the Northeast Corridor, where Amtrak shows an operating profit.] Major new orders of equipment include 70 electric locomotives for the Regionals and the long-distance trains operating over the Northeast Corridor. Another is for 130 Viewliner II diners, crew dorm-baggage cars, sleepers, and baggage cars to replace worn-out "Heritage" equipment (built before Amtrak was formed in 1971) for the Eastern long-distance trains. The first of the ACS-64 electric locomotives entered service on February 7, 2014. The Viewliner II cars should begin entering service later in the year.

Recent Amtrak developments (2013–2016)
In May 2013, Boardman signed to a two-year "renewable" contract. Board Chairman Anthony Coscia said, "We are extremely pleased with the progress Amtrak has made under the leadership of Joe Boardman". Boardman's salary during 2013 was $350,000. At Amtrak, Joe Boardman oversees an organization that carried a record 31.2 million passengers and had $3 billion in revenue while employing more than 20,000 people in fiscal year 2013. Since Boardman’s appointment, Amtrak made progress cutting debt, purchasing new equipment, and improving infrastructure, with cost recovery reaching a new company peak of 93% in 2014. E-ticketing and electronic payment for on-board snacks, meals, and beverages have been put in place, as well as Wi-Fi on most trains. Boardman is perhaps the longest serving high-level Republican appointee under President Barack Obama.

On December 9, 2015, Boardman announced in a letter to employees that he would be leaving Amtrak in September 2016. He had advised the Amtrak Board of Directors of his decision the previous week. Boardman's successor, former Norfolk Southern Railway President and CEO Charles "Wick" Moorman, was named in August 2016 and took over on September 1, 2016. P42DC unit 42 was later named after Boardman.

Personal life and death
Boardman and his wife, Joanne, had three children. Sadly, he suffered a stroke while on vacation in Florida on March 5, 2019, and died on March 7.

Awards
Railway Age magazine named Joseph H. Boardman as its 51st "Railroader of the Year" in its January 9, 2014, issue, which featured a column about him and a printed interview with him. A video of the interview can be seen at railwayage.com.