American Car and Foundry Company
American Car and Foundry (often abbreviated as ACF) is an American manufacturer of railroad rolling stock. One of its subsidiaries was once (1925–54) a manufacturer of motor coaches and trolley coaches under the brand names of (first) ACF and (later) ACF-Brill. Today ACF is known as ACF Industries LLC and is based in St. Charles, Missouri. It is owned by investor Carl Icahn.

History
American Car and Foundry was formed and incorporated in New Jersey in 1899 as the result of the merger of 13 smaller railroad car manufacturers. The company was made up of:

Later in 1899 ACF acquired Bloomsburg Car Manufacturing Company (of Bloomsburg, Pennsylvania). Two years later, ACF acquired Jackson and Sharp Company (founded 1863 in Wilmington, Delaware), and the Common Sense Bolster Company (of Chicago, Illinois). The unified company made a great investment in the former Jackson & Woodin plant in Pennsylvania, spending about $3 million. It was at this plant that ACF built the first all-steel passenger car in the world in 1904. The car was built for the Interborough Rapid Transit system of New York City, the first of 300 such cars ordered by the railroad.

During World War I ACF produced artillery gun mounts and ammunition, submarine chasers and other boats, railway cars, and other equipment to support the Allies. ACF ranked 36th among United States corporations in the value of World War II production contracts.

Products
In the past ACF built passenger and freight cars, including covered hopper cars for hauling such cargo as corn and other grains. One of the largest customers was the Union Pacific Railroad, whose armour-yellow carbon-steel lightweight passenger rolling stock was mostly built by ACF. The famous dome-observation car Native Son was an ACF product. Today the US passenger-car market is erratic in production and is mostly handled by specialty manufacturers. Competitors Budd, Pullman-Standard, Rohr Industries, and the St. Louis Car Company have all either left the market or gone out of business.

The manufacturing facility in Milton, Pennsylvania, is serviced by the Norfolk Southern Railway and is capable of manufacturing railcars and all related railcar components. The plant is capable of producing pressure vessels in sizes 18,000–61,000 gwc, including propane tanks, compressed gas storage, LPG storage, and all related components, including heads. The plant, covering 48 acres, provides 500,000 square feet of covered work area and seven miles of storage tracks. The Huntington, West Virginia, production site was closed in late 2009. 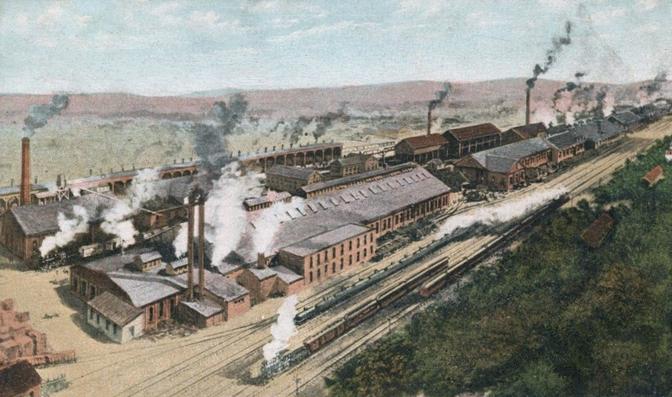