McKeen Motor Car Company
The McKeen Motor Car Company of Omaha, Nebraska, was a builder of internal combustion-engined railroad motor cars (railcars), constructing 152 between 1905–1917. Founded by William McKeen, the Union Pacific Railroad's Superintendent of Motive Power and Machinery, the company was essentially an offshoot of the Union Pacific and the first cars were constructed by the UP before McKeen leased shop space in the UP's Omaha Shops in Omaha, Nebraska. The UP had asked him to develop a way of running small passenger trains more economically, and McKeen produced a design that was ahead of its time. Unfortunately, internal combustion engine technology was not, and the McKeen cars never found a truly reliable powerplant.

The vast majority of the cars produced were for E. H. Harriman's empire of lines (Union Pacific, Southern Pacific and others). Harriman's death in 1909 lost the company its major sponsor and investor, and Harriman's successors were less enthusiastic about the McKeen cars.

Many McKeen cars ended up being re-engined with a variety of drive mechanisms — gasoline-mechanical, gasoline-electric, diesel-electric, or even steam power.

Most, although not all, McKeen cars had the distinctive "wind-splitter" pointed aerodynamic front end and rounded tail. The porthole windows were also a McKeen trademark, adopted allegedly for strength after the 7th production car. A dropped central door, as pictured, was also present on the majority of the cars. Two lengths, 55 and 70 feet, were offered; either could be fitted out with a large mail and express area ahead of the center doors, a smaller mail/express area, or the car could be all seats for a maximum capacity of 64 or 105 respectively.

Engine
Originally, McKeen cars used engines from the Standard Motor Works of Jersey City, New Jersey, but switched to an engine of their own design from the eighth car produced, M8 on the Union Pacific. All engines were straight-6 in configuration, of power ratings between 100 horsepower (75 kW) on the first car (M1) and a maximum of 300 horsepower (220 kW) on the most powerful later cars. The cylinders were vertical and the engine mounted transversely across the car in all McKeen cars and locomotives produced.

All engines were equipped to be run in either direction, as is not uncommon with marine engines; there was no reverse gear. To run in reverse, the engine had to be stopped, the camshaft shifted by the motorman to the reverse cam set, and the engine restarted in reverse. Starting was by compressed air.

Motor truck
The lead truck of the car was the powered truck; the engine was rigidly mounted atop this truck and moved with it when it turned. Only the front axle was powered (via a chain drive) a design decision which contributed to the car's poor adhesion characteristics. The front wheelset had a 42-inch diameter, while the three other wheelsets were 33-inch diameter.

Interior
McKeen cars were generally wood-panelled on the interior and fitted with transverse bench seats with a central aisle. The rounded rear was fitted with a semi-circular bench seat. Lighting was originally acetylene.

Problems with McKeen cars
Most of the problems experienced with McKeen cars involved the powerplant and drivetrain. As with many other attempts to bring marine engine technology to the rails, engines that were reliable on the stable platform of a ship when attended to by experienced technicians and operators proved less so when exposed to the vibration, indifferent maintenance and less careful handling they found on the railroad.

Starting the engine was a problem on the early cars; with no independently powered compressor, the compressed-air starting relied on the limited reserves of the car's reservoirs. There were many reports of cars being started by being pushed or towed by locomotives or even horses, after the compressed air ran out. Later cars, with an independent gasoline-driven compressor which could be hand-started, did not suffer from these problems.

The lack of a reverse gear also caused problems. The engine had to be stopped, the camshaft shifted to a set of reverse cams, and then started in the opposite direction. This was acceptable shipboard, perhaps, but deeply disliked by railroad operators. Accounts exist of engineers' elaborate schemes for avoiding the necessity to reverse.

The transmission was a common problem; a clutch did not seem to exist which combined the ability to withstand 200 horsepower (150 kW) on a regular basis with the ability to give a smooth start. Clutch failures were commonplace. Competitor GE's cars used an electric transmission, and that or a hydraulic torque converter have been used on the vast majority of successful internal combustion-engined rail vehicles since.

Many operators found the McKeen car to be lacking in power and traction, the latter unsurprising since only one of four axles was powered.

Victorian Railways cars
The Victorian Railways, the government-run system of the state of Victoria in Australia, ordered two McKeen cars in 1911, these being delivered in 1912. These were the only broad-gauge cars, built to the VR gauge of 5 ft 3 in (1,600 mm). They were fitted with buffers and hook and chain couplers, and were built with the rounded-nose body type, rather than knife-nosed. Since VR stations uniformly had car-level platforms, the usual dropped entranceway was instead raised into the roof.

Like the Victorian Railways cars, the cars were fitted with the more rounded nose and with buffers; however, the typical McKeen dropped center door was retained to permit easy passenger access without a raised platform. The cars, unlike most, had the same size of wheels on both axles of the lead truck and a chain drive linking them, making all 4 wheels driven.

These cars were approximately 19 metres (62 ft 4 in) long and originally seated 75; this was soon reduced to 69 by dividing the car into a non-smoking section (seating 55) and a smoking section (seating 14). The five cars were based at Woolloongabba for most of their lives, and handled services to the Brisbane suburbs of Corinda and Sunnybank as well as between Manly and Cleveland.

The cars proved no more reliable in Queensland than elsewhere; by 1920 car No.1 was out of service and cars Nos. 2 and 5 were modified as Tourist and Day Inspection cars, with luxury accommodations for 32 passengers. They were still expensive to run, at an estimated double the running costs of a steam-hauled train; the Great Depression finished them off, and the five cars were withdrawn between 1929 and 1931 and scrapped at QR's Ipswich shops.

Southern Utah Railroad No. 100
The Southern Utah Railroad took possession in 1916 of the most powerful McKeen motor car ever produced, with a six-wheel leading truck. Two of the three axles in that truck were powered, connected by side rods; the engine developed 300 horsepower (220 kW). Unlike most McKeen cars, it had a rounded front end instead of the knife-edge prow normally favored; it also featured roof-mounted radiators in addition to those in the normal location behind the pilot.

Despite the extra power, this was only a 55-foot-0-inch (16.76 m) car with a capacity of 48 passengers. The additional power was needed for the severe grades (max. 4.92%) and curvature of the line between Price and Hiawatha for which it was intended.

The car was apparently not a success and did not last long in service, being withdrawn from service in June 1917 and dismantled, the engine and power truck being sold. The carbody was used as a shop employee locker room at Martin until it was dismantled in 1990. In the mid '90s the dismantled No. 100 was then purchased by a ranch owner in Utah. There, he cut it in half at the vestibule and used the rail car as two separate storage units. In 2015, the two halves were then traded for two sea containers by Bently enterprises LLC. Moved to Minden, Nevada, and is undergoing a complete renovation.

It is described as being of 0-4-2 wheel arrangement, with the engine mounted across the car as normal and driving the rearmost driving axle in the normal McKeen fashion. Siderods transferred the drive to the other pair of driven wheels. The arrangement was largely identical to the three-axle lead truck on the unique Southern Utah Railway McKeen car.

Zeitler documents this locomotive as having a tractive effort of 12,000 lbf (53 kN). The frame was cast steel, and the superstructure constructed of steel, with sufficient solidity to add structural strength; the horizontal cast steel engine bed was also described as a structural member. The straight-6 engine had an 11-inch (279 mm) bore and 15-inch (381 mm) stroke, for a total displacement of 8,553 cubic inches (140.16 L); it developed 300 horsepower (220 kW).

Another McKeen locomotive was created by the Charles City Western Railway of Iowa by building a wooden boxcab superstructure atop a McKeen power truck.

Surviving McKeen products
An example is preserved at the Nevada State Railroad Museum. This car ran on the Virginia and Truckee Railroad. It has been fully rebuilt. As of September 2010, it runs on special events.

The Nevada State Railroad Museum has restored a full McKeen car, Virginia and Truckee Railway Motor Car 22, a 1910-built 70 foot car. This was one of the last McKeen cars to be still running with its original motor. It made its last run in September 1945, and its body was sold in 1946 for service as a roadside diner, later to be used for a plumbing supply store in Carson City, Nevada. Donated to the Museum in 1996, its first run was on May 9, 2010, the car's hundredth anniversary of construction. The original powerplant did not survive, and no other McKeen engines could be located. Consequently, a modern diesel engine was fitted to allow the car to operate up to the original maximum speed. The fully restored McKeen motorcar was put back into operation on May 9, 2010, right on schedule for its 100th anniversary of its construction. The motorcar is now being used at the Nevada State Railroad Museum In Carson City Nevada for special occasions such as Independence Day and Nevada Day.

The NSRM also owns the remains of a second McKeen car which was converted into a diesel-electric switching locomotive.

Another McKeen body, construction number 83/103, survives in Anchorage, Alaska. It originally belonged to the San Diego Cuyamaca & Eastern Railroad then was later sold to the Yuma Valley Railroad before arriving in Alaska around 1921, being re-engined and round-nosed in 1924, converted to an unpowered trailer in 1935, and finally retired in the late 1940s after serving in the 714th Railway Battalion during WWII. The car, originally named the "Cuyamaca" is now in the process of transportation and restoration by Madison Kirkman, of http://www.mckeencar.com. He plans to restore the car back to running condition, and hopes to transport the car sometime in 2015.

Two un-powered McKeen trailers survive; one is a storage shed in St. Helena, California, while the other is at the Illinois Railway Museum.

Interior of the McKeen Motor car. 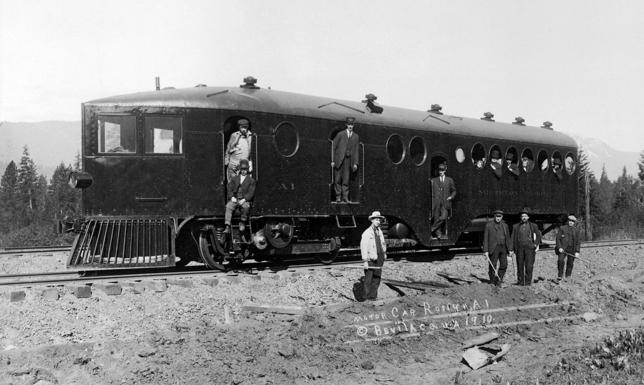 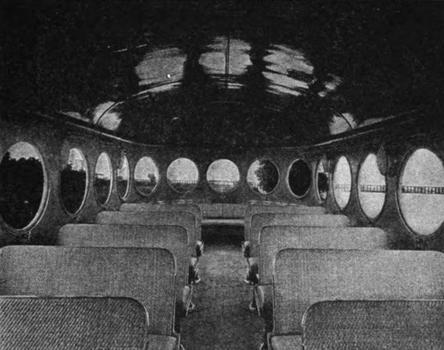 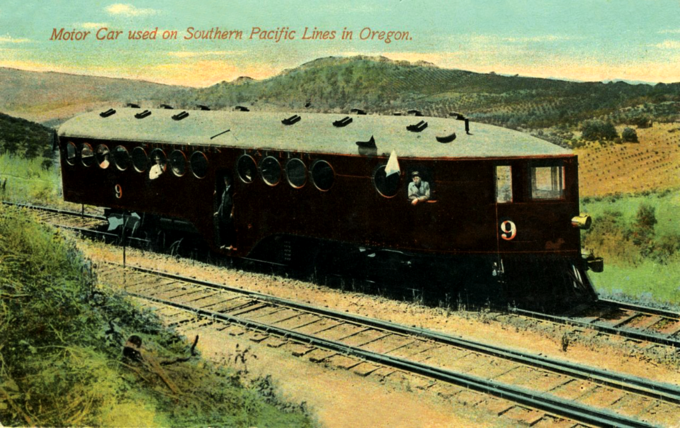 The McKeen Motor car Roslyn of the Northern Pacific Railroad.