A postcard view of the plant and office building of the Standard Steel Car Company in Butler, Pennsylvania.

Established in 1902 in Butler, Pennsylvania by John M. Hansen and "Diamond Jim" Brady, the company quickly became one of the largest builders of steel cars in the United States. Pullman, Inc. purchased control of SSC in 1929 and merged it with Pullman Car & Manufacturing in 1934 to form Pullman-Standard Car Manufacturing Company.

History
The overnight success of the Pressed Steel Car Company at the end of the 19th century spurred a flurry of competitors in the suddenly booming market for steel cars. American Car & Foundry predecessor Michigan-Peninsular Car had produced steel frame cars beginning in 1897, American Steel Foundries produced steel cars in 1900, and the Cambria Steel Company opened a car plant at Johnstown, Pennsylvania in 1901. Pressed Steel Car's Chief Designer John M. Hansen and famed salesman "Diamond Jim" Brady left the company in 1901 to found SSC. With financial backing from Andrew Mellon, SSC was incorporated on January 2, 1902, broke ground for its new plant in Butler in April, and produced its first car (Chesapeake & Ohio No. 23001) in August of the same year.

Hansen's carbuilding philosophy was the opposite of Pressed Steel Car founder Charles T. Schoen's. Schoen believed that each part of a car should be cut and shaped (pressed) from sheet steel to minimize weight and the need for assemblies of small parts while maximizing strength. The custom stamping dies and assemblies needed for this work were expensive and uneconomical in small quantities. Hansen preferred to use standard steel shapes that were already widely available from the steel mills at economical cost. SSC's earliest production reflected this: a steel hopper with side posts made from standard channel and angle shapes became the company's signature product, building over 7,500 through 1907.

Expansion was immediate. Capacity was increased first to 60 cars a day, then 125 cars a day in 1903. Production peaked at 29,411 cars in 1907, 2,836 of those built in January of that year. SSC subsidiary Standard Car Truck Company opened at New Castle, Pennsylvania in 1906, and a second SSC plant opened at Hammond, Indiana in 1907. Hansen established a car shop in LaRochelle, France for SSC in 1917, and SSC also controlled a plant in Rio de Janeiro, Brazil. SSC also entered the field of automobile production in 1913 with the Standard Eight, which in 1919 had 83 horsepower (62 kW). Automobile production ended in 1921.

"Diamond Jim" Brady died in 1917, and Hansen retired from the presidency in 1923, succeeded by Colonel James Frank Drake. Hansen stayed on as Chairman of the Board until his death in December 1929. That same month, Pullman Inc. agreed to purchase SSC for 610,000 shares of Pullman stock (worth approximately $51,000,000) and $6,000,000 in cash. SSC continued to operate independently for several years as the Great Depression brought business to an almost literal standstill. Merger with Pullman Car & Manufacturing in 1934 created Pullman-Standard, a second giant car builder to rival American Car & Foundry. Pullman continued to operate at Butler until it exited the railroad car business in 1982, and sold the plant to Trinity Industries in 1984.

Acquisitions
SSC gained control of a number of other car builders during its existence. 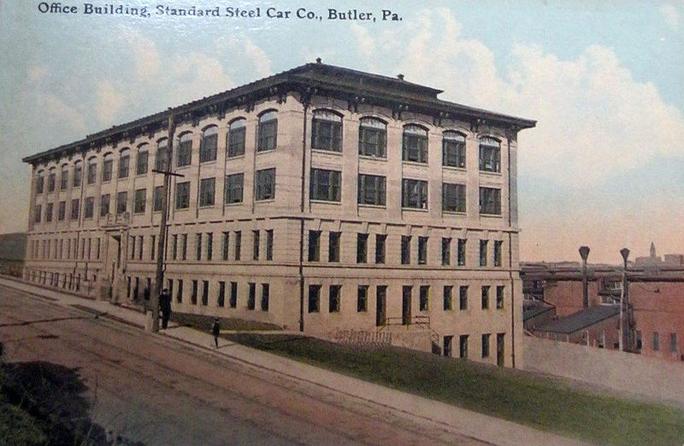