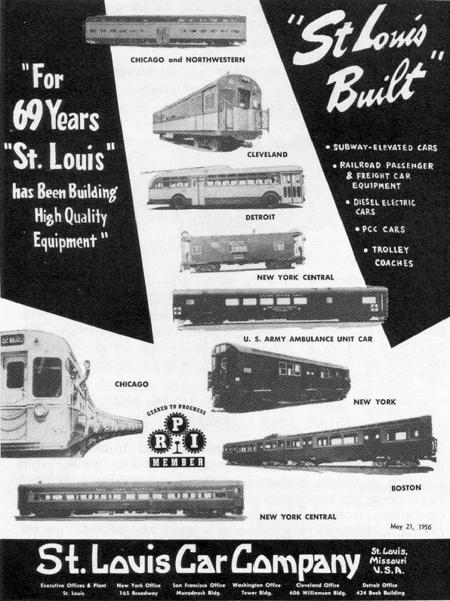 History
The St. Louis Car Company was formed in April 1887 to manufacture and sell streetcars and other kinds of rolling stock of street and steam railways supporting the traction industry. In succeeding years the company built automobiles, including the American Mors, the Skelton, and the Standard Six. The St. Louis Aircraft Corporation division of the company partnered with the Huttig Sash and Door company in 1917 to produce aircraft. During the two world wars, the company manufactured gliders, trainers, Alligators, flying boats, and dirigible gondolas. Among their most successful products were the Birney Safety Car and the PCC streetcar, a design that was very popular at the time.

The firm went on to build some of the vehicles used in the transit systems of New York City and Chicago, as well as the FM OP800 railcars manufactured exclusively for the Southern Railway in 1939.

In 1960, St. Louis Car Company was acquired by General Steel Industries. In 1964, St. Louis Car completed an order of 430 World's Fair picture-window cars (R36 WF) for the New York City Subway and was building 162 PA-1s (110 single units, 52 trailers) for the Port Authority of New York and New Jersey for their use on the Port Authority Trans-Hudson line to New Jersey. Also in the mid-1960s, the company completed building the passenger capsules, designed by Planet Corporation, to ferry visitors to the top of the Gateway Arch at the Jefferson National Expansion Museum in St. Louis, Missouri.

St. Louis Car continued business until 1968 and finally ceased operations by 1974. The final St. Louis Car products were R44 subway cars for the New York City Subway and Staten Island Rapid Transit, and the USDOT State of the Art Car rapid transit demonstrator set whose design was based on the R44.

Today, "San Francisco’s Municipal Railway has assembled one of the most diverse collections of vintage streetcars, trolleys, and trams in transit service anywhere. Up to 20 or more of these wonderful vintage vehicles carry passengers along Market Street and The Embarcadero every single day."

The St. Louis Car Co., later known as General Steel Industries, manufactured not only St. Louis streetcars and trolleys but cars for such far-flung transit systems as the Metro in Paris, France. Meissner’s son, Edwin B. Meissner, Jr., succeeded his father as head of the company, and continues to be an active member of Congregation Shaare Emeth.

Streetcars held sway in St. Louis and its suburbs from the 1880s until the mid- and late 1940s. Young records that new state-of-the-art buses began to encroach on the streetcars domain. New streamlined streetcars were brought into service in 1946 to replace older cars, some dating back to 1903. (Edwards plans to use vintage, pre-streamlined cars for his Forest Park-U. City Loop trolley). By 1947, with the removal of eight lines, only a little more than half of the original streetcar system remained.

The advent of early home TV-watching also cut down the ridership. Still, some streetcars continued to roll into the early 1960s until the St. Louis Public Service Company sold all of its St. Louis properties for $20 million to the Bi-State Development Agency as of April 1, 1963. Another 14 other local transit companies were also sold to Bi-State for another $5 million, with the whole package funded by a bond issue. The old streetcars were phased out by Bi-State, with the last car running in 1966. 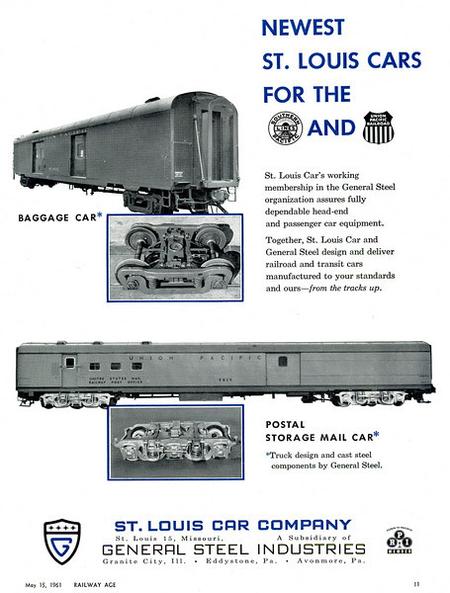 An Illinois Terminal Railroad Streamliner built by the St. Louis Car Company in the early 1950s. 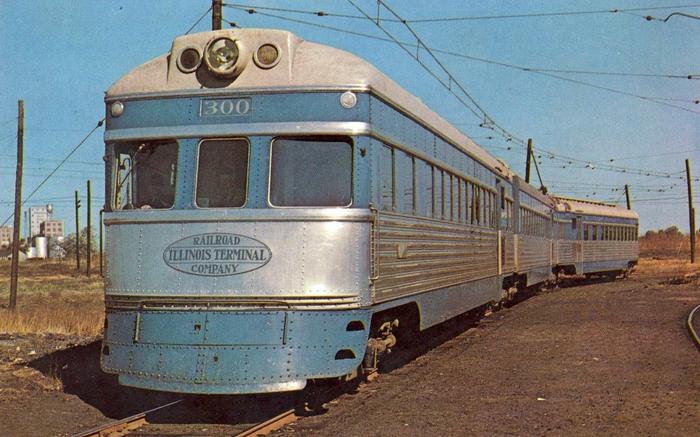