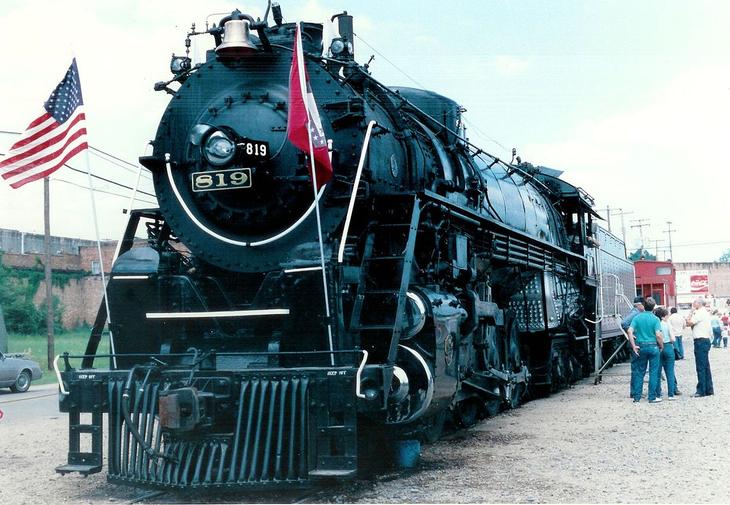 The former SSW shops are occupied by the historic collection of railroad equipment. This museum is about an hour's drive from Little Rock, AR, and is one of the largest displays of historic railroad equipment in Arkansas. Between the disappearance of SSW in 1992 into parent Southern Pacific and the size of the collection, Arkansas Railroad Museum can be considered an upper-level railroad preservation facility. The Museum is operated by the Cotton Belt Rail Historical Society and local volunteers. The Museum is open Monday through Saturday from 9 AM to 2 PM and on Sunday afternoon by appointment.

Specific Equipment
Arkansas Railroad Museum is most famous for stabling SSW No. 819, the last steam locomotive built by SSW in February 1943. The 819 was restored to operation in 1986. It operated on 13 excursions between 1986 and 1993, but is currently out of service pending completion of an overhaul mandated by the Federal Railroad Administration. A collection of historical passenger cars, mostly lightweight Pullman-Standard equipment, is also kept for use behind 819. The 819 is listed on the National Register of Historic Places.

The following equipment is at the museum:

Cotton Belt 336, a D3 Mogul built by Baldwin in 1909, is in poor condition and will be cosmetically restored. This locomotive is also listed on the National Register.

Other equipment at the museum includes:

Facility
The equipment is mostly housed in the former SSW shops, which was the main heavy repair and erection shop for SSW during the steam era. The shop has such heavy repair equipment as pits, massive overhead cranes, and tools for servicing large railroad equipment. On the east side of the former shops is a transfer table that is still operable. The transfer table is used to move exhibits from time to time. The best time to see the exhibits outside is the first weekend in April (unless that weekend is Easter) when the Museum has its annual show. Many of the exhibits are taken outside so that tables can be set up inside the museum for vendors.