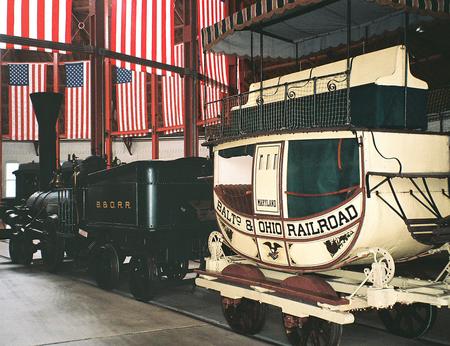 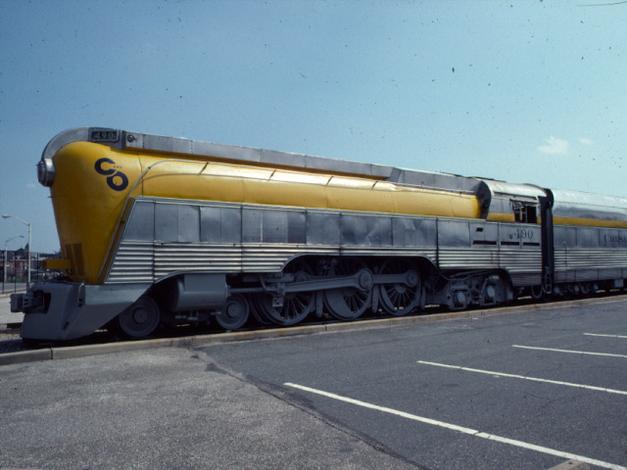 B&O Railroad Museum
The B&O Railroad Museum is a museum exhibiting historic railroad equipment in Baltimore, Maryland, originally named the Baltimore & Ohio Transportation Museum when it opened on July 4, 1953. It has been called one of the most significant collections of railroad treasures in the world and has the largest collection of 19th-century locomotives in the U.S. The museum is located in the Baltimore and Ohio Railroad's old Mount Clare Station and adjacent roundhouse, part of the B&O's sprawling Mount Clare Shops site begun in 1829, the oldest railroad manufacturing complex in the United States.

Mount Clare is considered to be a birthplace of American railroading, as the site of the first regular railroad passenger service in the U.S., beginning on May 22, 1830. It was also to this site that the first telegraph message, "What hath God wrought?" was sent on May 24, 1844, from Washington, D.C., using Samuel F. B. Morse's invention.

The museum houses collections of 19th- and 20th-century artifacts related to America's railroads. The collection includes 250 pieces of railroad rolling stock, 15,000 artifacts, 5,000 cubic feet (140 m3) of archival material, four significant 19th-century buildings, including the historic roundhouse, and a mile of track, considered the most historic mile of railroad track in the United States. Train rides are offered on the mile of track on Wednesday through Sunday from April through December and weekends in January. In 2002, the museum had 160,000 visitors annually.

The museum also features an outdoor G-scale layout, an indoor HO scale model, and a wooden model train for children to climb on. From Thanksgiving through the New Year, local model railroad groups set up large layouts on the roundhouse floor and in select locations on the grounds of the museum. A museum store offers toys, books, DVDs and other railroad-related items.

The museum and station were designated as a U.S. National Historic Landmark in 1961. In 2008, the Museum won three awards in Nickelodeon's Parents' Picks Awards in the categories of: Best Museum for Little Kids, Best Indoor Playspace for Little Kids, and Best Indoor Playspace for Big Kids. Television and film actor Michael Gross is the museum's "celebrity spokesman".

History
The inaugural horse-drawn B&O train traveled the 13 miles (21 km) of the newly completed track from Mount Clare to Ellicott Mills (now Ellicott City, Maryland), on May 22, 1830, the first regular railroad passenger service in the U.S. The existing Mount Clare station brick structure was constructed in 1851. The adjacent roundhouse designed by Ephraim Francis Baldwin was built in 1884 to service the B&O's passenger cars.

For much of its history, the B&O had been collecting locomotives and other artifacts from its history for public relations purposes. This collection was stored in various places, until the railroad decided to centralize it in a permanent home. The car shop of the Mt. Clare Shops was chosen, and the new museum opened on July 4, 1953.

The museum outlived its parent, the B&O Railroad, and was kept intact by both the Chessie System and CSX Corporation. In 1990, CSX deeded the property and collection to the newly formed, not-for-profit museum organization governed by an independent board of directors and provided it with a $5 million endowment. In 1999, the museum became affiliated with the Smithsonian Institution.

In the early morning of February 17, 2003, heavy snow from the Presidents' Day Storm collapsed half of the roof of the museum's roundhouse. Although the structure's central support columns remained standing, the supporting iron struts and ties of the destroyed roofing sections failed under the snow load. The museum suffered heavy damage not only to the roundhouse itself but also to the collection within the roundhouse. Some of the items were damaged beyond repair. Reporting on the devastation the following day, The Baltimore Sun said, "...hours after the collapse, columns of mangled steel stuck out from the roundhouse ... Locomotives and passenger cars in the museum's collection, some dating from the 1830s, could be seen covered with snow and debris." The roundhouse, with a newly repaired roof, reopened to the public on November 13, 2004, with the damaged locomotives and cars were surrounded by a plexiglass barrier. As of September 2015, all damaged exhibits have been restored to their original appearance.

After the roof collapse, subsequent fund raising and restoration allowed the museum to upgrade many of its facilities. In 2005 the museum opened a new service facility west of the roundhouse for restoration of historical equipment and maintenance of active equipment.

Exhibits
The museum's holdings include both originals and replicas, some of which were built by the B&O for its centennial "Fair of the Iron Horse" in 1927. Exhibits include:

Ellicott City Station
The B&O's station in Ellicott City, Maryland, also part of the museum, is the oldest surviving railroad station in America. The Main Depot building was completed in 1830-1831 by the Baltimore & Ohio Railroad. The site also includes the 1885 freight house, a replica of the first horse-drawn passenger rail car, and a 1927 "I-5" caboose. Exhibits highlight the people who built and operated America's first railroad, the role of the railroad in the Civil War, and the changes wrought by the development of rail transportation.

The freight house features a 40-foot HO-gauge model railroad layout showing the first 13 miles (21 km) of commercial rail track between Baltimore and Ellicott Mills (as Ellicott City was known in the 1830s). The museum announced plans to sponsor an Explorer post under the aegis of the Boy Scouts of America beginning in 2010, for teenage participants to help maintain the freight house's model railroad, as well as helping with large events at both the Ellicott City Station and the B&O Railroad Museum in Baltimore.

Some of the Baltimore and Ohio Railroad rolling stock displayed at the B&O Railroad Museum.

Early Baltimore and Ohio Railroad passenger equipment of the 1830s, displayed at the B&O Railroad Museum. 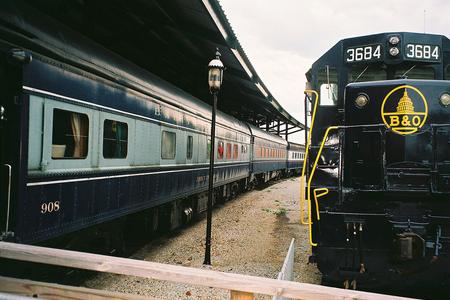 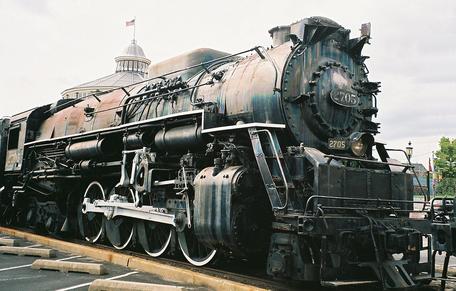 By The original uploader was Thyl at German Wikipedia (Transferred from de.wikipedia to Commons.) [GPL (http://www.gnu.org/licenses/gpl.html)], via Wikimedia Commons 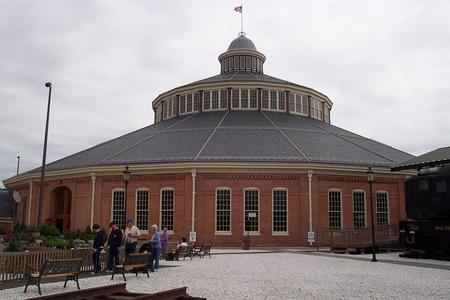