Baltimore Traction 554, a 9-bench open car built by Brownell in 1896, is brought into the loading area at the Baltimore Streetcar Museum on August 11, 2002. 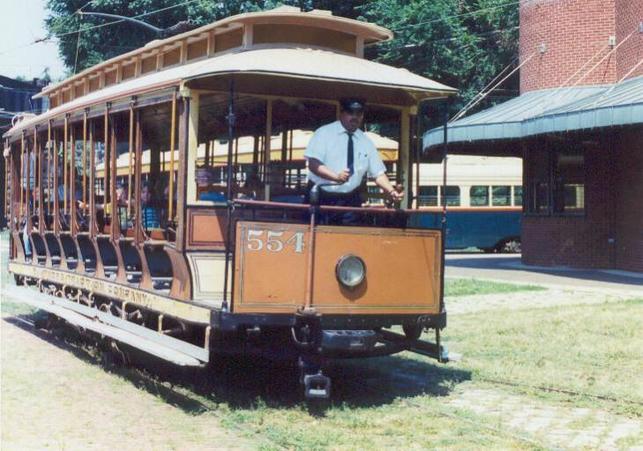 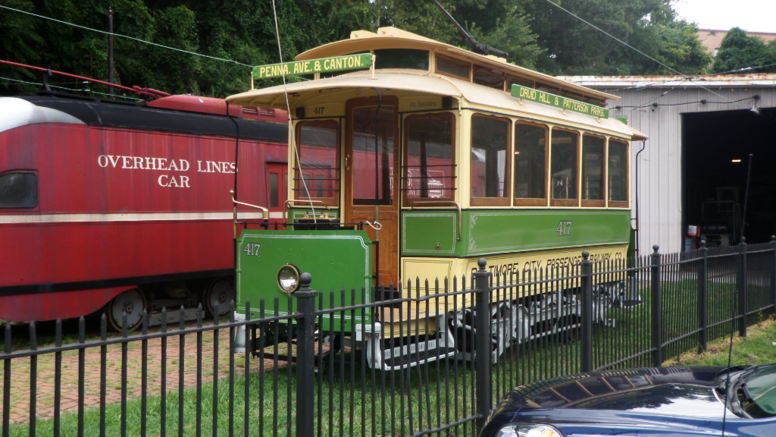 The original Museum collection had been under the stewardship of the United Railways and Electric Company, then the Baltimore Transit Company and finally, for a short time, the Maryland Historical Society. Finally the Baltimore Streetcar Museum was founded in 1966 by several members of the Baltimore Chapter of the National Railroad Historical Society. The collection was moved from Robert E. Lee Park near Lake Roland in 1968 to the present Falls Road Maryland and Pennsylvania Railroad site and public operations began in July 1970. Before public operations could commence, many hours of volunteer work were necessary to build operating track and install overhead wire which, at first, provided only a short ride for visitors. Over the years, the Museum has incrementally extended its line along Falls Road that includes now turning loops at the north and south ends of its line. Completion of the Museum's entire streetcar line was realized in October 2008 with the completion of its double tracking project, which took many years to complete. The track gauge is 5 ft 4 1⁄2 in (1,638 mm), which is unique.

Operating Streetcars
During public operations, the Baltimore Streetcar Museum offers rides to visitors the on various Streetcars including, but not limited to the following:

Car No. 264, a United Railways and Electric Company convertible model, built in 1900 by the Brownell Car Company. Car has hand brakes only.

Car No. 4533, a United Railways and Electric Company One-Man Safety model, built as a hand brake two man car in 1904 by J. G. Brill Company, rebuilt by UR&E as a one-man safety car in 1924, rebuilt again by BTCo as a Company railbond testing car and re-numbered 3550, lasting in service until 1963; Returned to its 1924 appearance in a recent Museum rebuilding.

Car No. 6119, a United Railways and Electric Company Peter Witt streetcar model, built in 1930 by J. G. Brill Company. A predecessor of the PCC car and about equal to one in every respect; In service until 1955.

Car No. 7407, a Baltimore Transit Company PCC, built by the Pullman-Standard Car Manufacturing Company. At present this is the only regularly operating Pullman PCC in any Museum. This car was built in 1944, and became the very last streetcar to turn a revenue wheel for BTC on November 3, 1963.

On many occasions, passengers may ride one of the BSM's latest acquisitions, a Philadelphia SEPTA Presidents' Conference Committee (PCC streetcar), car No. 2168), unveiled in September 2009. This car was built by the St. Louis Car Co. for The Philadelphia Transportation Co. in 1947, and lasted in SEPTA service until 1992. During the spring, summer and fall (weather permitting), passengers may also ride the BSM's Car No. 1164, a United Railways and Electric Company 12-Bench Open Brill 22-A model, built in 1902 by J. G. Brill Company. This car also is exclusively hand braked. Even Santa Claus comes to visit the children during the Museum's "Santa's Streetcar" event which operates for two weekends in December. One of the cars is decked out in Christmas finery and Santa welcomes everyone to the Museum. Car 417, built by the Baltimore City Passenger Railway as a horse car, later re-built as a cable car trailer, and finally into an electric car in 1895, is the Museum's newest restoration. This car operates on special occasions and is reported to be the oldest operating electric streetcar in America.

Volunteer operating staff
The Museum's streetcar operations is handled by an all-volunteer staff, composed exclusively of Museum members. Training is provided by the Museum's Training Department during a formal eleven week educational program. Recruitment is periodically advertised through the Museum's newsletter which all Museum members receive.

Museum Rentals
The Baltimore Streetcar Museum is also available for private parties for children and adults alike. The BSM's Visitor Center facilities feature an auditorium, the "Trolley Theatre," streetcar rides, and tours of the carhouse, where visitors view other historical transit equipment, such as an 1859 horse car, a crane car, and an electric bus, known as a trackless trolley or trolleybus.

Streetcar Service
A track providing service at the museum is identified by the Maryland Transit Administration as Route 25. At one time, the United Railways and Electric Company routes was the Route 25 line on Falls Road, past the current site of the Museum.