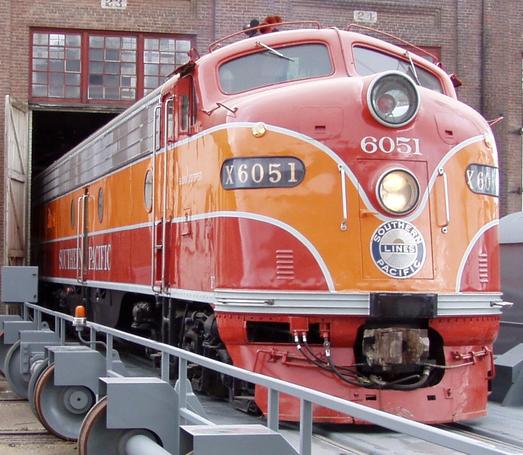 Southern Pacific No. 6051, an EMD E9 painted in Daylight livery. 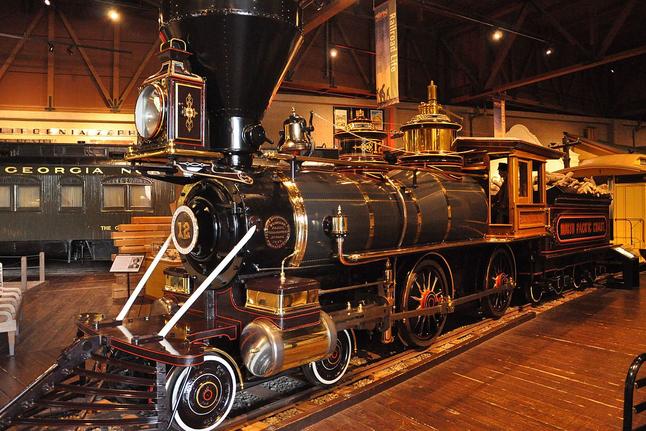 The museum features 21 restored locomotives and railroad cars, some dating back to 1862. The "Sierra Scene" shows a large scale mockup of a construction scene high in the Sierra Nevada representing Donner Pass circa 1867, featuring the locomotive Gov. Stanford. Other exhibits show how the influence of railroads changed American society, influencing travel, commerce and daily life, as well as the lives of railroaders and the diversity of people who work on railroads. Changing exhibits featuring photography, ephemera, and artifacts from the museum's collection, add depth and incidental information to the overall story of railroad history. The Museum has an extensive educational program for elementary students from across the region to help them learn about railroad history using re-enactments, costumed docents, and including train and handcar rides.

Adjacent to the main museum building is a reconstruction of the 1870s-era Central Pacific Railroad passenger station and freight depot on Front Street, which houses historic and contemporary railroad equipment. In early 2011, the interior remained closed to public use, but is occasionally open for special events. Between April and October, the Sacramento Southern Railroad, operated by the museum, takes passengers on a 40-minute, 6-mile (9.7 km) roundtrip route along the Sacramento River on a portion of the Walnut Grove branch of the former Southern Pacific Railroad. The Sacramento Southern Railroad owns the Walnut Grove Branch right-of-way that extends south from Sacramento along the eastern bank of the Sacramento River. A few miles of track were rebuilt along the levee near Freeport, California as part of a US Army Corps of Engineers project. The CSRRM hopes to one day have a longer excursion line, perhaps as far as Hood, California.[citation needed] At that location the railroad passengers could disembark the train and take a tourist steamboat back up the Sacramento River to Old Sacramento.

History
The museum has its origins in 1937, when a group of railroad enthusiasts in the San Francisco Bay Area formed the Pacific Coast Chapter of the Railway and Locomotive Historical Society. This organization worked for years to promote the idea of a railroad museum, donating 30 historic locomotives and cars to the California Department of Parks and Recreation to be the nucleus of a State-operated museum in Sacramento. The Museum's first facility, the Central Pacific Railroad Passenger Station, opened in 1976. The Railroad History Museum was completed in 1981. Steam-powered passenger train service on the Sacramento Southern Railroad began in 1984, with the Central Pacific Railroad Freight Depot opening three years later. Railtown 1897 State Historic Park in Jamestown was added to the Museum complex during 1992.

Notable locomotives
Steam locomotives
Atchison, Topeka and Santa Fe 2925 - Stored, a 4-8-4 type built by Baldwin Locomotive Works in 1944.
Atchison, Topeka and Santa Fe 5021 - Stored, a 2-10-4 type built by Baldwin Locomotive Works in 1944.
Central Pacific No. 1 Gov. Stanford - Cosmetically restored, a 4-4-0 type built by Norris Locomotive Works in 1862.
Granite Rock No. 10 (Operating as the excursion train ride for the California State Railroad Museum at Old Sacramento, California)) a USATC S100 Class 0-6-0T built by Porter in 1942.
Northwestern Pacific 112 - Stored, a 4-6-0 type built by ALCO in 1908. Sole surviving NWP locomotive.
North Pacific Coast 12 Sonoma - Cosmetically restored, a 3 ft (914 mm) narrow gauge 4-4-0 type built by Baldwin in 1875. Sole surviving NPC locomotive, and one of only three surviving Baldwin 8/18C class 3 ft (914 mm) narrow gauge 4-4-0s.
Central Pacific No. 3 / Southern Pacific No. 1 C. P. Huntington - Cosmetically restored, a 4-2-4RT type built by Cooke Locomotive Works in 1863.
Central Pacific No. 233 - Stored, awaiting restoration. A 2-6-2 tank engine built by Central Pacific's Sacramento Shops in 1882. Donated 2001 by the Pacific Locomotive Association.
Southern Pacific 2467 - Display. Restored to operation by members of the Pacific Locomotive Association in 1999, a 4-6-2 type built by Baldwin Locomotive Works in 1921. On 10-year loan from PLA pending FRA-mandated boiler work.
Southern Pacific 4294 - Cosmetically restored, a 4-8-8-2 type built by Baldwin Locomotive Works in 1944. Sole surviving "Cab-Forward" locomotive.
Union Pacific 4466 - Displayed, an 0-6-0 type built by Lima Locomotive Works in 1920 which operated at the museum until 2001. Whistle now on No. 10.
Virginia & Truckee 12 Genoa - Baldwin-built 4-4-0 type constructed in 1873. Currently on static display, but in operable condition.
Virginia & Truckee 13 Empire - Baldwin-built 2-6-0 type constructed in 1873, cosmetically restored to its original appearance. Mirrors placed around the engine provide museum visitors with an amazing panoramic view of all sides of the locomotive at once.
Virginia & Truckee 21 J.W. Bowker - Baldwin-built 2-4-0 switcher constructed in 1875; sole surviving example of this type. Stored outdoors in the Central Pacific Passenger Depot.
Nevada Short Line No. 1 - Baldwin-built 3 ft (914 mm) narrow gauge 2-6-0 (Mogul Type) constructed in 1879; on static display with a few cars and rests above all other trains on an elevated track; last time it was run was in 1939-40 for the Golden Gate International Exposition on daily reactments of the 1869 Golden Spike ceremony.
Overfair Railway No. 1915 - Built by Louis MacDermott in 1915, No. 1915 is one of only five 19" gauge 4-6-2 pacifics built for the 5 mile, 19" gauge railroad called the Overfair Railway at the 1915 Panama-Pacific International Exposition in San Francisco. No. 1915 is 1/3 scale with 26" drivers and a boiler pressure of 200. Although her brothers and sisters, numbers No. 1911, No. 1912, No. 1913, and No. 1914 ran at the exposition, No. 1915 was never completed by Louis. His other locomotives No. 1912 and No. 1914 currently operate at the Swanton Pacific Railroad. No. 1913 is currently being rebuilt, and will run with her siblings when completed. Number No. 1911's state is currently unknown. It might be privately owned or scraped.