The HCRR retains the only 2 surviving Gloucester series TTC subway cars (photo shows 2 other cars of that model, in Toronto).

A Peter Witt streetcar in the 1921 livery of the Toronto Transit Commission, at the Halton County Radial Railway museum. The rollsigns are set as they would be if the car was operating on the Bathurst route as far as St. Clair Avenue, once its northern terminus.  By DavidArthur - Own work, CC BY-SA 3.0, https://commons.wikimedia.org/w/index.php?curid=2843414 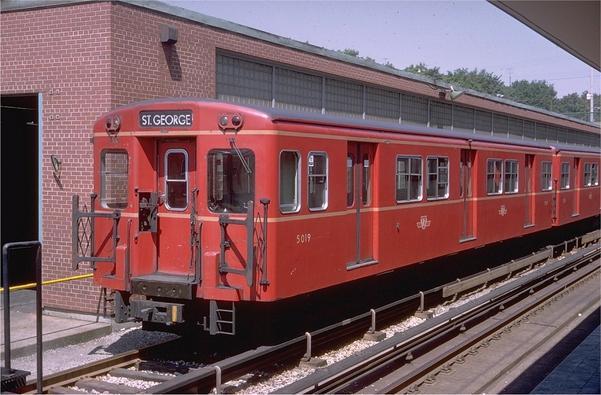 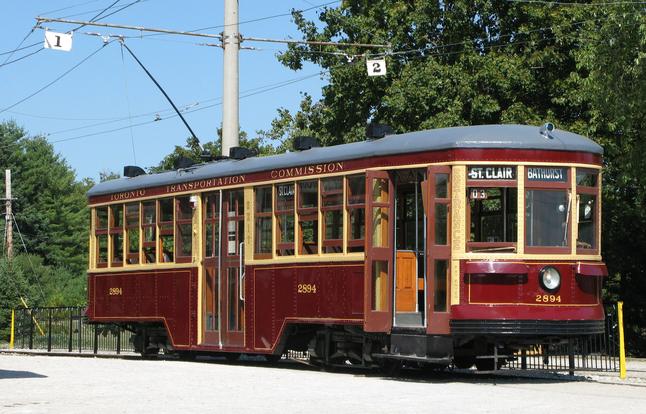 Halton County Radial Railway
The Halton County Radial Railway is a working museum of electric streetcars, other railway vehicles, trolley buses and buses. It is operated by the Ontario Electric Railway Historical Association (OERHA). It is focused primarily on the history of the Toronto Transit Commission and its predecessor, the Toronto Transportation Commission (TTC), with a collection including PCC, and Peter Witt cars, earlier streetcars and Gloucester series and Montreal-built subway cars.

The museum is open to the public, with rides on many of its vehicles. It is located between the villages of Rockwood and Campbellville in Milton, Ontario, Canada, along part of the Toronto Suburban Railway’s former right-of-way. The tracks conform to TTC’s gauge of 4 ft 10 7⁄8 in (1,495 mm), 60 mm (2.36 in) wider than 1,435 mm (4 ft 8 1⁄2 in) standard gauge. Vehicles from other systems must be altered to accommodate the tracks, and cars intended for third-rail power must be reconfigured for use with overhead wire. In 1889, electric railway service on routes radiating from Toronto, Ontario began. An Ontario Historical Plaque was erected at the Halton County Radial Railway Museum by the province to commemorate the Radial Railways' role in Ontario's heritage. Museum Peter Witt streetcars can be seen in the 2005 film Cinderella Man on the streets of Toronto to give it a 1930s New York City appearance.

History
The Halton County Radial Railway and the OERHA was formed in 1953 by a group of men who wanted to save Toronto Transit Commission streetcar 1326 from being sent to the scrap yard. After the donation of this streetcar, the dream grew. Land that used to be a part of the Toronto Suburban Railway in Nassagaweya Township was acquired, and subsequently, a number of other street and radial cars were eventually rescued. The museum's grand opening took place in 1972.

Since the beginning, the vision of the HCRR was to inform, educate and inspire the public about the electric railway history of Ontario and Canada. Today, the museum displays and operates a variety of historic streetcars, radial cars and work cars, and maintains a collection of photographs, memorabilia and archival materials. The oldest rail car in the collection dates from the late 1800s.