By Wccrupper - I took this photograph with an Olympus E-420 DSLR and modified it in Adobe Lightroom. This is Algers, Winslow, and Western #4 at Gradman, Indiana.Previously published: http://www.rrpicturearchives.net/showPicture.aspx?id=4845423, CC BY-SA 4.0, https://en.wikipedia.org/w/index.php?curid=55958316 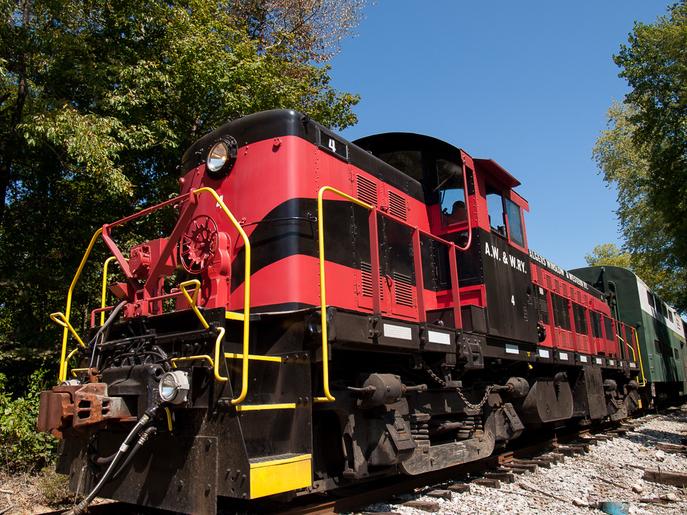 History
The Indiana Railway Museum was founded in 1961 in the Decatur County town of Westport with one locomotive and three passenger cars. The museum relocated to Greensburg and then in 1978 to its present location in French Lick after the Southern Railway deeded a total of sixteen miles of right of way stretching from West Baden, Indiana, approximately one mile north of French Lick, to a small village named Dubois, to the south.

Rail line
The museum owns 16 miles of an ex-Southern Railway and Monon line running from West Baden Springs in Orange County, through French Lick, then southwest to the towns of Cuzco and Dubois in Dubois County.

The track beyond Dubois is operated by the Dubois County Railroad, a for-profit subsidiary of the museum. The line interchanges with Norfolk Southern at Huntingburg.

Excursions
The museum operates the 10-mile stretch of the line between French Lick and Gradman as a heritage railroad known as French Lick Scenic Railway. Excursions are based on a 20-mile round trip through portions of the scenic Hoosier National Forest and the 2200 foot Burton Tunnel and takes approximately 2 hours. On occasion, the museum runs a train called the "Spirit of Jasper" in cooperation with the City of Jasper. The train operates out of the rebuilt Jasper train depot, and sometimes runs to French Lick with the "Jasper to French Lick Express".