Kentucky Railway Museum
The Kentucky Railway Museum, now located in New Haven, Kentucky, United States, is a non-profit railroad museum dedicated to educating the public regarding the history and heritage of Kentucky's railroads and the people who built them. Originally created in 1954 in Louisville, Kentucky, the museum is at its third location, in extreme southern Nelson County. It is one of the oldest railroad stations in the United States.

The museum owns four steam locomotives, six diesel locomotives and over a hundred pieces of rolling stock. Four of the pieces are separately on the National Register of Historic Places: the Louisville and Nashville Steam Locomotive No. 152, the Louisville and Nashville Combine Car Number 665, the Mt. Broderick Pullman Lounge-Obs-Sleeping Car, and the Frankfort and Cincinnati Model 55 Rail Car.

History
The site of the current museum was built by the Louisville and Nashville Railroad from 1856 to 1857, on their old line, which ran to Lebanon, Kentucky. The line was of vital importance to the Union cause, making it a frequent target of Confederate forces under John Hunt Morgan, and others, during the 1860s; the nearby bridge was even destroyed. The railroad station on the site now is a 1990s replica of the station which was built at the site in 1910.

The museum was chartered in 1954 by railroad enthusiasts from Louisville, through the Kentucky General Assembly, who wished to preserve steam locomotives and other rail paraphernalia. One of its very first displays was the Louisville and Nashville No. 152 locomotive, a caboose, and a wooden coach. These first donations, including railroad track, were from the Monon Railroad, and the Louisville and Nashville Railroad. The museum has moved twice since it was chartered, from its original location in Louisville. The first site was at 1837 East River Road, where the Louisville Soccer Fields are now located. This first location was 6 acres (2.4 ha) in size, and was fenced and lighted by the Louisville Parks Department. The site opened for the public on May 30, 1958, with its dedication taking place on September 30, 1957. The museum eventually left the first location because of flooding from the nearby Ohio River, and a general lack of necessary space. The worst of these floods was in March 1964.

In December 1975 it was decided to move the museum to a larger and safer location. The museum was moved in 1977 to the Ormsby Village area at the corner of La Grange Road and Dorsey Lane on land leased from Jefferson County, and known as Ormsby Station. The Louisville and Nashville No. 152 locomotive was left at River Road to be repaired. Ormsby Station was situated on 32 acres (13 ha). However, the county informed the museum that the lease would not be renewed in 1993; the land was in a highly-valuable commercial area.

With the edict from Jefferson County, it became necessary to move to the current site in New Haven, which opened on July 4, 1990. The original New Haven location was 8 acres (3.2 ha), with a building, and was donated by Lewis and Chester Simms, two New Haven businessmen, along with their wives (Elizabeth Jo and Nora respectively). It used the last eighteen miles remaining of the Louisville and Nashville Railroad's old Lebanon line, then under the control of CSX Transportation, which had taken control of the Louisville and Nashville Railroad in the 1970s. Train excursions began at the New Haven site in May 1991. The move also inspired the renovation of the New Sherwood Hotel.

Many of the donations to move the museum from Louisville to New Haven were due to the efforts of Glenn Rutherford, a reporter for the Louisville Courier-Journal. During the fund raising for the move Rutherford told many stories regarding the trains at the museum. He was singularly honored for his efforts in November 2003.

The Kentucky Railway Museum faced vandalism concerns in its new location. In June 1992 it became necessary to build a razor wire perimeter fence after three juveniles (of an average age of twelve) damaged several of the historic cars and trains. Rich Collins, then the museum director, worried about the facility looking "like Fort Knox or a penal colony".

In 1999 the Kentucky Railway Museum was given a grant by CSX Transportation to start a traveling exhibit.

There is one other heritage railroad in Nelson County: My Old Kentucky Dinner Train, which is based at the Old Louisville and Nashville Station in Bardstown, Kentucky.

Attractions
Among the steam locomotives is Louisville and Nashville Railroad No. 152, a 4-6-2 Pacific style that is believed to be the last operating steam locomotive from the L&N. The museum operates a heritage railroad and offers excursion trains on selected weekends in summer and fall. The line is a portion of the L&N's former main line from Lebanon Junction to Corbin; the museum operates the segment from Boston to New Haven, with the line having been abandoned east of the museum site. There is a large model train layout and a gift shop at New Haven, in a brick building that is a replica of the former L&N depot there.

Locomotives
The old Louisville and Nashville Steam Locomotive No. 152 is one of the trains used to take passengers to Boston, Kentucky, and back. It was donated to the museum by Louisville and Nashville Railroad President William H. Kendall in 1957. It is the oldest known remaining 4-6-2 Pacific to exist. It is also the "Official State Locomotive of Kentucky", designated as such on March 6, 2000.

Another locomotive that dates back to the Kentucky Railway Museum's early days is Monon Route's Diesel Engine No. 32. It was painted black and gold by Monon, and kept as such, to match the school colors of Purdue University, located in West Lafayette, Indiana. It was purchased by Monon in 1948, and then acquired by the Louisville and Nashville Railroad in August 1971. It became a display at the museum in 1972.

Rail Cars
Several historic rail cars are at the facility. The Louisville and Nashville Combine Car Number 665 was one of only two "two wood side steel" train cars ever made. It was designed for the times of the Jim Crow laws; whichever end was the front during the trip would hold white passengers, while the rear held black passengers. It was given to the Kentucky Railway Museum by the Louisville and Nashville Railroad in 1958.[16] During the Civil War Centennial observances of the 1960s this car was pulled by the famous Civil War-era steam locomotive The General, touring various parts of the Eastern U.S. rail network.

The Mt. Broderick Pullman Car was a four-star hotel on rails, with polished brass restroom fixtures, and pull out beds. The Pullman Company sold the car to the museum in 1958.

Excursions
Train rides leave regularly from the museum to Boston, Kentucky, and back, with picturesque views of the Rolling Fork River Valley along the way. The train crosses roads fourteen times on a single one-way trip. The total trip is 22 miles (35 km) and lasts approximately one hour.[19] At various times special excursions will involve themes such as train robberies, haunted trains, Easter Bunny, Santa Claus, and Thomas the Tank Engine.

Exhibits
One of the buildings at the facility holds a model train display. The model trains are in glass covered dioramas, covering a total area of 3,000 square feet (280 m2). Dioramas include a German-landscape featuring a village and carnival, and another depicting convicts working on placing rails. 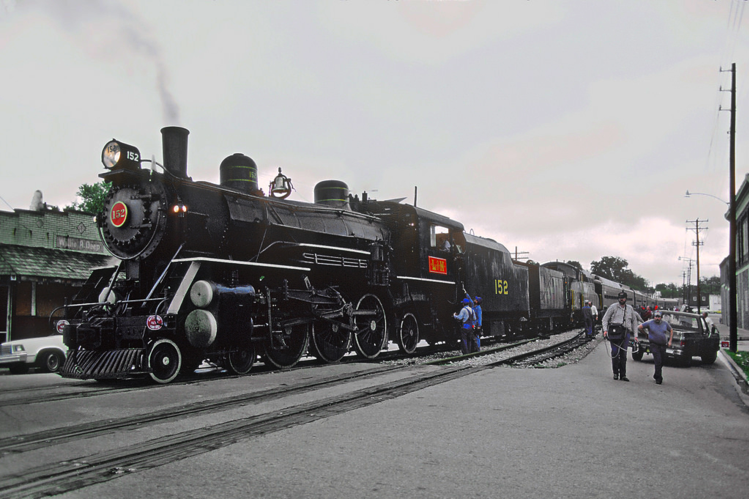 The Kentucky Railway Museum's Monon BL2 No. 32 on an excursion in October of 1986.  Photo by Roger Puta. 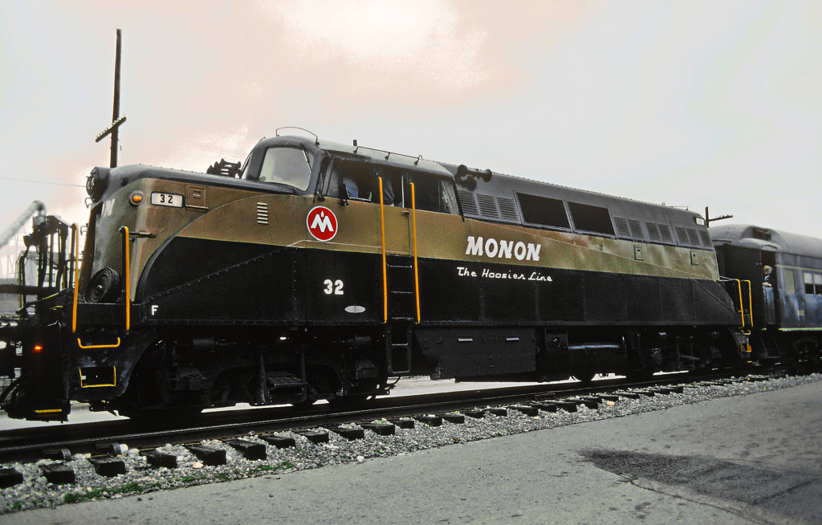