Location and history
The museum is situated at the East Ely Yards, which are part of the Nevada Northern Railway. The site is listed on the United States National Register of Historic Places as the Nevada Northern Railway East Ely Yards and Shops and is also known as the "Nevada Northern Railway Complex". The rail yards were designated a National Historic Landmark District on September 27, 2006. The site was cited as one of the best-preserved early 20th-century railroad yards in the nation, and a key component in the growth of the region's copper mining industry. Developed in the first decade of the 20th century, it served passengers and freight until 1983, when the Kennecott Copper Company, its then-owner, donated the yard to a local non-profit for preservation. The property came complete with all of the company records of the Nevada Northern from its inception.

The museum also maintains an extensive fleet of its original rolling stock, including passenger cars, wood-side box cars, ore cars, and work trains, all dating from the 1910s. It has the oldest operating tank car and the oldest operating coal-fired steam crane on any American railroad.

During the 2002 Winter Olympics, held in Salt Lake City, the railroad was part of the Olympic Steam Team, carrying spectators to the Soldier Hollow Olympic venue. The railroad's No. 93 steam-engine, joined Utah's Heber Valley Railroad's Nos. 618 and 75 steam-engines, in pulling eight-car trains full of passengers, to the Soldier Hollow depot where they disembarked and continued to the venue entrance on a horse-drawn sleigh. The day prior to the Opening Ceremony of the games, all three locomotives were combined into one triple-headed train, and used to transport the Olympic flame from Soldier Hollow to Heber City, Utah as part of the torch relay.

The two story depot is set on a stone foundation. The ground floor is rusticated stone, separated from the upper level by a painted stone belt course, with a stuccoedsecond story. The gables are curvilinear in the accepted Mission Revival style. The well-preserved interior retains separate men's and women's waiting rooms, with baggage and express rooms. Offices are on the second floor.

The depot was a significant location on the Nevada Northern as the chief embarkation point for the copper mining region of White Pine County. The location of the depot was a matter of controversy between the railroad and residents of Ely, who successfully sued the railroad to change the depot's name from Ely to East Ely to reflect its distance from the main townsite. The railroad, originally owned by the Nevada Consolidated Copper Company, was transferred to the Kennecott Copper Company in 1933 when it took over Consolidated's mining operations. Passenger service on the Nevada Northern stopped in 1941, and the depot was used for Kennecott offices until 1985. The state of Nevada acquired the depot in 1990 for the museum.

The East Ely Depot was listed on the National Register of Historic Places in 1984.

Wild West Limited
This steam train excursion includes cowboys and cowboy grub and a a hold-up.

Steptoe Valley Flyer
This museum-highlight train travels back in time to deliver a classic railroad experience. The Steptoe Valley Flyer was the train that carried 4.5 million passengers from 1906 to 1941 to White Pine County, Nevada. Departing from the original depot, passengers board the original first-class passenger car No. 5 (built in 1882) behind baggage/railway US Post Office car No. 20 (built in 1906) and steam locomotive No. 40 (built in 1910). An emigrant's meal is served.

Haunted Ghost Trains
Riders should prepare themselves for a scary trip on a haunted train. Ghost stories come alive as local volunteers create a thematic experience for all those aboard as zombies, ghosts, ghouls, aliens and "Bigfoot" appear.

Polar Express
This Christmas seasonal train is one of the highlights of the year. The Polar Express heads to the "North Pole" to visit with Santa Claus. On the trip, volunteers serve hot chocolate and cookies as they read the story the Polar Express.

Heritage railroad
The museum operates a short rail line that was formerly owned by the Nevada Northern Railway as a heritage railroad. This line was called the "Ore Line" and the museum runs excursion trains westward from Ely to Ruth, and northeast from Ely to the vicinity of McGill. One of the trains is advertised as the Ghost Train of Old Ely.

In popular culture
The depot building was used for scenes in the 2001 film, Rat Race. The museum appeared in a 2010 episode of Modern Marvels, titled "Super Steam." The museum also appeared in six episodes of American Restoration, and was referenced in a 2017 episode of The Big Bang Theory. 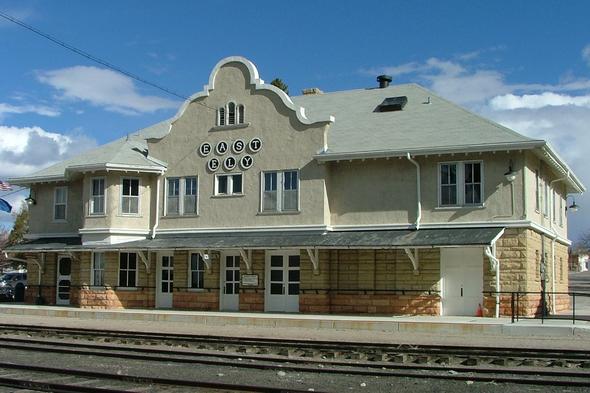 By The original uploader was Pitamakan at English Wikipedia - Transferred from en.wikipedia to Commons by Vux using CommonsHelper., CC BY-SA 3.0, https://commons.wikimedia.org/w/index.php?curid=6448307

East Ely Depot, built in 1907 for the Nevada Northern Railway. 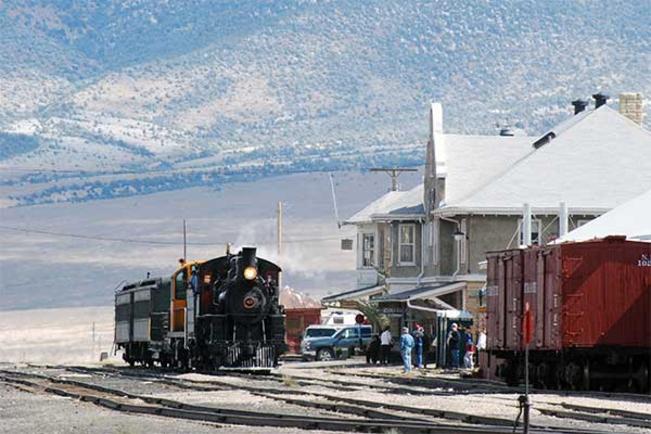