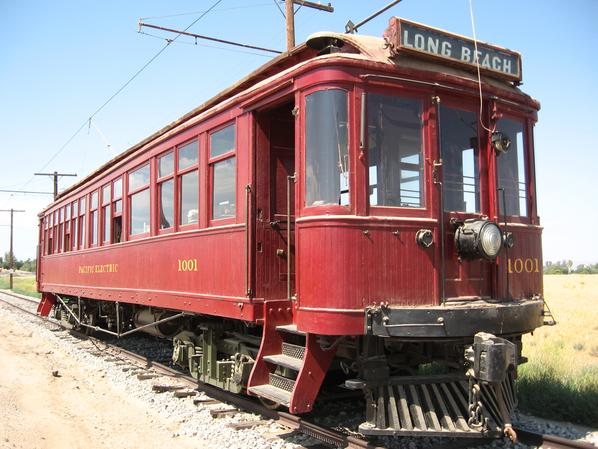 Background
The collection focuses on Southern California's railroad history. It houses the largest collection of Pacific Electric Railway rolling stock in the world, much of it rescued from scrapyards after the discontinuation of their passenger operations.

Two early Los Angeles 3 ft 6 in (1,067 mm) narrow gauge streetcars from the Los Angeles Railway or standard gauge streetcars from the Pacific Electric Railway run each weekend on the one-half-mile (0.8 km) long, dual gauge (1,435 mm gauge (4 ft 8 1⁄2 in) and 3 ft 6 in (1,067 mm) narrow gauge) Loop Line. A passenger-carrying steam, diesel or electric-powered freight train with open gondolas fitted with benches and at least two cabooses runs on the 1.5-mile (2.4 km) long, standard gauge mainline that was once a part of the transcontinental main line of the Atchison, Topeka and Santa Fe Railway (to San Diego). Its main line stretches from south of the museum northward to the junction with the BNSF Railway, where the historic Perris Depot on State Route 74 stands.

The BNSF Railway spur is in active use, and the railroad grants permission for OERM trains to use the spur for special events. A Pacific Electric interurban "Red Car" also operates on the mainline on selected weekends, but the line electrification ends a block south of the depot. Streetcars and locomotives are selected on a rotating basis. The museum maintains a steam locomotive in operating condition and its use is scheduled for each third weekend, September through May, certain special events and major holidays.

Admission to the OERM and parking are free except for special events, but a ticket must be purchased to ride on the museum railway. The ticket is valid for unlimited rides on the train and streetcars.

Tours of the grounds, static exhibits and shops can be self-guided or with a docent. A picnic area is located near the main entrance as is an interactive railroad "signal garden." Built between 2000 and 2001 and utilizing a combination of standard railroad signal relays and custom microprocessor controls, the garden's first phase included:

Two restored Magnetic Flagman grade crossing signals, both upper- and lower-quadrant
Safetran V20 tri-light block signal, a new signal originally installed on the Southern Pacific Coastal Route and removed from service for standardization purposes by its successor, the Union Pacific Railroad
Union Switch and Signal motorcar indicators which were miniature semaphores designed to warn maintenance crews of oncoming trains
Union Switch and Signal motorcar indicator as used by the ATSF; this was little more than a pair of electric lamps and colored lenses
Grade crossing warning bell ca. 1910. This is a large, bronze bell with an electromagnetically driven clapper which alerted motorists to the approach of a train. It stood at an SP grade crossing in nearby Anaheim until the early 1960s when it was donated to the museum
Union Switch and Signal relay cabinet, ca. 1940 and used to house the electronics powering the exhibits

The display has since been expanded to include modern grade crossing signals, a US&S semaphore which once was mounted on a signal bridge spanning the Pacific Electric Watts Line and a century-old US&S banjo signal, used for both grade crossing protection and train control and one of only three known to exist. The others are on display at the Baltimore and Ohio Museum and the Smithsonian Institution.

Notable exhibits
The Emma Nevada, a 3 ft (914 mm) narrow gauge Baldwin Locomotive Works 2-6-0 "Mogul" steam locomotive built in 1881, was purchased by Disney animator Ward Kimball and his wife Betty for their backyard Grizzly Flats Railroad in 1938. Originally built for the short-line Nevada Central Railway connecting Battle Mountain with Austin, the beautifully restored locomotive features Kimball's own artwork on the cab and headlight and was finally fired up in 1942. Boiler problems permanently sidelined the Emma Nevada in 1951. Kimball donated the locomotive to the museum and it can be seen today in the museum's Grizzly Flats car barn. The love of trains that Kimball shared with Walt Disney and fellow animator Ollie Johnston is credited with the idea of building a railroad in Disneyland in Anaheim, California. At Disneyland, a restored 1902 Baldwin 3 ft (914 mm) narrow gauge locomotive has been named after Kimball. The Ward Kimball, which entered service on June 26, 2005, is the first locomotive added to the Disneyland Railroad since 1959. The Chloe, a 3 ft (914 mm) narrow gauge Baldwin Locomotive Works 0-4-2T steam locomotive built in 1883, was also previously owned by Kimball and is displayed next to the Emma Nevada. Both are not operational; however, a diesel switcher is used to move the locomotives up and down the museum's short segment of 3 ft (914 mm) narrow gauge track on select days. On July 28, 2017, the Chloe and its train car made an appearance at the media preview for the reopening of the Disneyland Railroad. They were pulled along its new route by the Justi Creek Railway's Marie E. locomotive driven by John Lasseter. The OERM plans to restore the Chloe to operating condition.

The museum's newest locomotive, ATSF 98 is a 1967 EMD FP45 diesel locomotive. Featuring a 3600-horsepower (2.7 MW), 20-cylinder prime mover and six traction motors, the FP45 was intended for fast passenger service and is geared to run in excess of 90 miles per hour (140 km/h). ATSF 98 is especially notable as being the last passenger locomotive ever purchased by the Atchison, Topeka and Santa Fe Railway and was used on Santa Fe's finest passenger trains, including the Super Chief between Chicago and Los Angeles. Relegated to fast freight service in 1971 when passenger rail operations were transferred to Amtrak, the FP45 was donated in operating condition less its air conditioner by the Burlington Northern Santa Fe in 1997, but its size limits its use to occasional demonstration service and special excursions. It is maintained in service-ready condition and is sometimes used on off-property work trains.

Southern Pacific 3100 is a GE U25B diesel locomotive once owned by the Southern Pacific Railroad and is the last operating example left in the US. Built in 1963, it became one of three SP locomotives painted in a red, white and blue color scheme in 1976 in celebration of the United States Bicentennial. Numbered as SP 3100 prior to being donated, this locomotive is used in regular service. Like the FP45, the U25B is certified to run on any railroad, and its two-axle trucks and 2,500-horsepower (1.9 MW) prime mover make it ideal for off-property work trains. It is also used to pull passenger-carrying freight cars on weekends and during members-only events, may be operated by museum members under supervision by a qualified engineer.

The Los Angeles Railway collection consists of over two dozen pieces of electric railway equipment and is the most comprehensive collection of preserved equipment from any large city streetcar system. Highlights of the collection, which includes examples of nearly every type of streetcar run in Los Angeles in the 20th century as well as numerous work cars, include the "Descanso", the only surviving street railway funeral car; car 3001, christened by Shirley Temple as the first PCC streetcar in Los Angeles; and several examples of the "California" type of streetcar that utilized a half-open design suitable to the warm climate. Cars are operated regularly over the only 3 ft 6 in (1,067 mm) narrow gauge trolley line remaining in the United States.

Ventura County Railway No. 2 is a 1922 Baldwin Locomotive Works 2-6-2 steam locomotive maintained in operating condition. Originally built to run on coal, the locomotive was converted to oil soon after delivery to its original purchaser, the Southern Pacific Railroad. Last used by the V.C. Ry. on an excursion run in 1959, it was put up for sale in 1962, sold to a private party in 1964 and transferred to the California Southern Railroad Museum, one of the OERM's predecessors, in 1972. The boiler was overhauled to present-day FRA steam locomotive regulations in 2001–2006; bringing the rest of the locomotive to specifications has been ongoing since its acquisition.

In addition to the museum's railroad equipment exhibits, its shops hold a historic collection of industrial machine tools and hand tools. One of these is a sheet-metal shear, which was made by Parker Manufacturing Company, a machine shop in Santa Monica, CA. The company needed a shear, but backlogs in the World War II years meant a two-year waiting list to obtain one. So, the small company decided to design and make its own shear. It was made entirely of steel plate (no castings) due to backlogs in foundries. The design was successful, and desired by other shops needing machine tools. Soon, the local company was in the shear manufacturing business. The museum puts this unique shear to use in its Carhouse Number 4.

ATSF No. 98 is a 1967 EMD FP45 diesel locomotive and is the last passenger locomotive ever purchased by the Atchison, Topeka and Santa Fe Railway. It is kept in operable condition.  By The original uploader was Pretzelpaws at English Wikipedia [GFDL (http://www.gnu.org/copyleft/fdl.html) or CC-BY-SA-3.0 (http://creativecommons.org/licenses/by-sa/3.0/)], via Wikimedia Commons 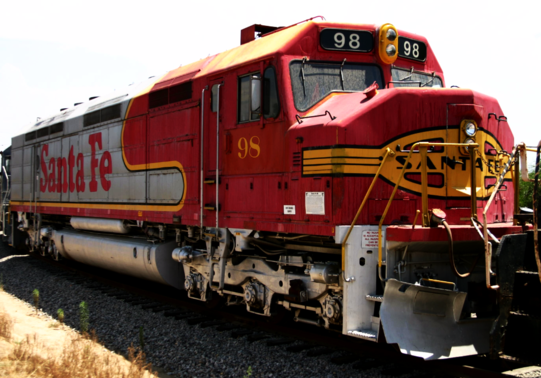 Pacific Electric 1001 interurban was built in 1913 by Jewett.