Blackpool 48, a 1928 double-deck streetcar (tram) from England, was used on the Willamette Shore Trolley line, in Portland (as seen here), for several years, but was moved to the Oregon Electric Railway Museum in 2006.   By Steve Morgan, CC BY-SA 3.0, https://commons.wikimedia.org/w/index.php?curid=40938095

The original museum opened in Glenwood, about 40 miles (64 km) west of Portland, in 1959, with the first operation of streetcars taking place in 1963 and regular operation in 1966. It was named Trolley Park or, more commonly, the Trolley Park, but its formal name in later years was the same as that of the present museum. The Glenwood museum was built on the site of a former steam logging railroad, and OERHS re-equipped the former sawmill building of the Consolidated Timber Company as a four-track carbarn. The museum property occupied about 26 acres (11 ha), and trolley cars were able to operate on a 1.7-mile (2.7 km) line.

Operation at the Glenwood site ended in autumn 1995.

The current museum opened in Brooks in 1996. The museum consists of about one mile of mainline track with overhead wire. There is a four-track carbarn to store the international collection of streetcars.

The collection includes:
Two Portland 1904 Brill streetcars (nicknamed Council Crest type), Nos. 503 and 506
Portland 1932 Brill "Master Unit", No. 813
Portland-built interurban, No. 1067
Blackpool, England, double-decker tram, No. 48, built in 1928. Acquired by OERHS in 1964.
Sydney, Australia, O-class tram No. 1187, built in 1912
Porto, Portugal single-truck streetcar, No. 210
Los Angeles Railway car No. 1318
Two San Francisco PCC streetcars, Nos. 1118 and 1159
San Francisco Boeing LRV, No. 1213
Hong Kong double-decker tram, No. 12
Portland snow sweeper, No. 1455, built in 1899 by McGuire
Oregon Electric Railway locomotive 21, an electric "steeple-cab" locomotive built in 1912; acquired in 2017
Three other electric steeple-cab locomotives, from Montana, all of which were last used by the Anaconda Copper Mining Company
Three types of trolley buses: a Twin Coach and a Pullman-Standard from Seattle and a CCF-Brill from Vancouver
Nine ex-Brussels, Belgium, cars all moved to the museum from storage in Port Mellon, British Columbia in 2015, all but one of which are single-truck cars:

One of the two Portland "Council Crest" Brill cars, No. 503, was loaned to San Francisco in 1983, and again in 1985, for operation in the San Francisco Historic Trolley Festival, predecessor of the F Market & Wharves heritage streetcar line. In the late 1980s, Portland's transit agency, Tri-Met, used cars 503 and 506 as the models for new replica-vintage streetcars it was planning to purchase for use on the then-planned Portland Vintage Trolley service. Four faux-vintage Council Crest cars were eventually built by the Gomaco Trolley Company.

The museum is open from May through October with trolley operations on Saturdays. The big event of the year is the annual Steam-Up, held on the last weekend of July and the first weekend of August. Thousands of riders use the trolley during these two weekends. 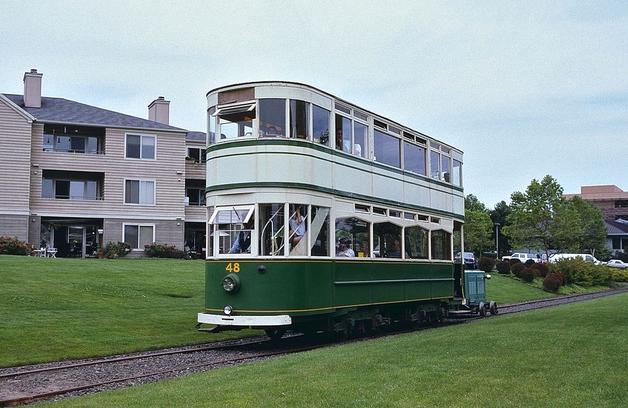 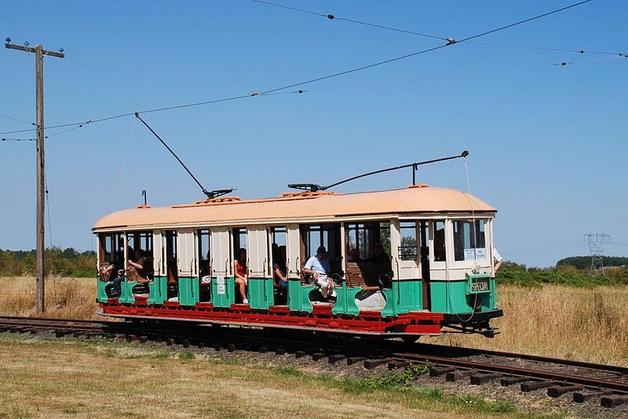