The museum was located next to the Margaret Hance Deck Park on Interstate 10 in downtown Phoenix until December, 2017. In 2016, the City of Phoenix declined to renew the museum's lease for another five-year period, and the Hance Park location was closed.

The museum has relocated to a site along Phoenix's historic Grand Avenue, one of the earliest trolley lines in the city. The museum is developing plans to construct a new museum on the site and is raising the funds to do so.

Museum features
Restored Phoenix Street Railway Streetcar No. 116 is currently in storage.
Phoenix Street Railway Car No. 504 (originally No. 108) is non-restored, and is currently in storage.
An electric calcine locomotive donated by the (then) Phelps-Dodge Corporation from its Douglas, AZ facility is on display.
Photographs, maps, and numerous items of historical interest are on display in the museum.

History
The line was founded in 1887 by Moses Hazeltine Sherman and used horse-drawn carts. Many of these lines were built to subdivisions that were being developed by Sherman's land development interests. Beginning in 1893, however, the railway was completely electrified. The line was popular with the locals and was partly responsible for the growth patterns observed in the early history of Phoenix. In 1911, the first of several planned interurban lines opened to Glendale; additional lines were planned but never built to Tempe, Mesa, and Scottsdale. The system reached its height in the 1920s with several line extensions. In 1925 there were 33.6 miles of track on six lines. Line voltage was 550 VDC.

A potential competitor, the Salt River Valley Electric Railway, in 1912 hired engineers to build lines east from downtown Phoenix to Mesa via Tempe and Scottsdale, and a Southside line, to run from Phoenix to Tempe on the south side of the Salt River. The Salt River company later announced its lines would "connect Phoenix, Scottsdale, Tempe, Mesa, Chandler, Alhambra, Glendale and Peoria." However, other than some digging on Van Buren and Monroe Streets, the line never managed to complete any construction, and was abandoned in 1914.

On October 3, 1947, a catastrophic fire destroyed most of the streetcar fleet. City officials faced the decision to either rebuild the fleet or use buses. Buses were ultimately chosen, and the streetcar system was abandoned in February 1948. The Phoenix area turned its focus to the automobile, suburbs, and highways; and until recently relied solely on buses for public transportation. Rail transit returned when Metro opened its modern light-rail system on December 28, 2008—nearly sixty years after the Street Railway's last run.

Operating Pattern, 1938
The City of Phoenix Street Railways, in 1938 were numbered and operated as follows:

No. 3 Kenilworth (5th Avenue Line). Ran south from Encanto Blvd. along 5th Avenue, past the Kenilworth School, and terminated at 2nd Avenue station.

No. 4 Indian School (3rd Street Line). Ran south from Indian School Road along 3rd Street, with double-track mainline as far as the loop at Monroe. Looped west at Washington and terminated at 2nd Avenue station. Return trip north and via Monroe back to right-hand track and north again on 3rd Street. 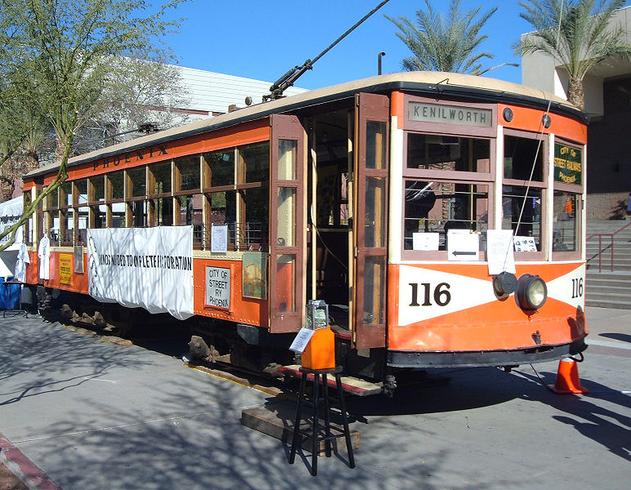 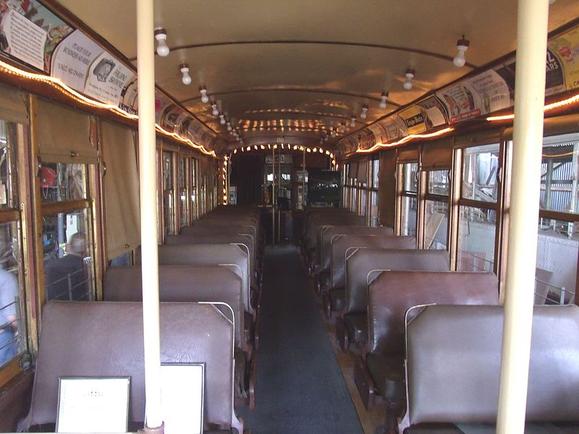 Phoenix Streetcar No. 116 as displayed during the grand opening of Valley Metro Rail on December 27, 2008.

Inside the historic Trolley Car No. 116 . The restored 1928 trolley served the Phoenix trolley system until 1947. 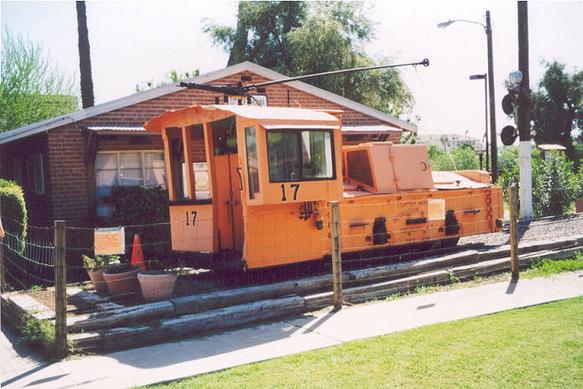