Union Pacific Railroad No. 6915, an EMD DDA40X "Centennial" locomotive, preserved by the Southern California chapter of the Railroad and Locomotive Historical Society at the Los Angeles County Fairplex in Pomona, California.  By Morven own work  CC BY-SA 3.0, https://commons.wikimedia.org/w/index.php?curid=137883 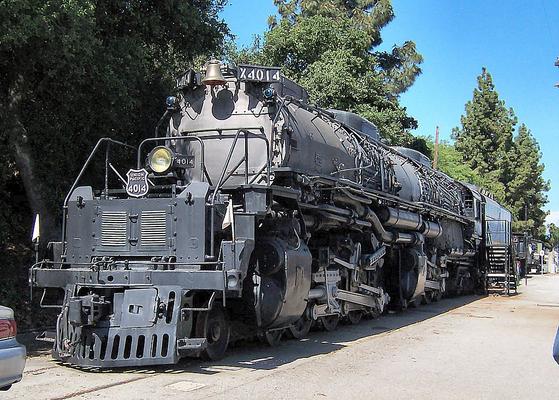 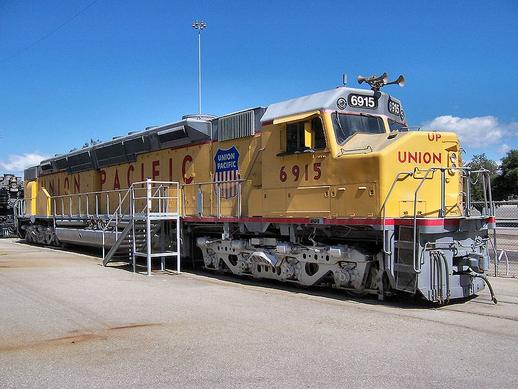 The Railway and Locomotive Historical Society was founded in 1921 and is the oldest organization in North America devoted to railroad history. In the Spring of 1953, a group of devoted railroad historians met with the idea of organizing a local chapter and did so on June 5, 1953. The exhibit opened in 1954 with their first acquisition, a Climax geared-type locomotive donated by Sunkist Growers, Inc. Since that time, seven additional locomotives, a Heavyweight Pullman Lounge, an AT&SF wooden Caboose, a Refrigerator car, an AT&SF Horse Express car and two track motor cars have been added to the exhibit. The center of the Museum's activities is the former Santa Fe Depot from Arcadia, California which was given to the Society in the summer of 1969. The Depot was originally built in 1895 and is a classic example of a 19th Century Santa Fe Station.

Exhibits are maintained by a staff of volunteers and admission to the Museum is free, however, the Museum does ask for donations to help maintain the historic equipment.

Arcadia Station
The collection is headlined by the Atchison, Topeka and Santa Fe Railway train station moved from Arcadia, California, in 1969. The 1887-built station is of gingerbread Victorian architecture and features a collection of railroadiana. A gift shop is also inside.

Notes: Terminal No. 2 was reputed to be the oldest working steam locomotive in daily service in the United States. Outer Harbor Dock and Wharf, Inc. and Union Oil Company donated the locomotive to the museum at that time. It is a 0-6-0 switching locomotive and was used along the docks at San Pedro, California. It was originally Santa Fe's 590, then it was sold to the Outer Harbor Dock & Wharf and renumbered to '2'. They later became the Outer Harbor Terminal Railway Company when Union Oil Company took over operation of the No. 2.

Notes: Locomotive No. 3 is an excellent example of the turn-of-the-century narrow gauge locomotives that were used on many short lines of the West. No. 3 was originally built for the 36-inch, narrow gauge Morenci Southern Railroad, an 18.4 mile line in Southern Arizona. When the line was abandoned in the 1930's, No. 3 was bought by United States Potash for use on their private, ore-hauling railroad at Carlsbad, New Mexico. It was used in daily service until 1948, and was donated to the museum in 1956 by the United States Borax and Chemical Corporation (formally U.S. Potash) No. 3 has its tiny drive wheels located inside the frame of the locomotive, while the counterbalances and rods are located outside the frame.

Notes: American Car & Foundry (ACF) was contracted by Santa Fe to rebuild old box cars into caboose cars. No. 1314 was one of these and was completed in 1923. This unit is known as a Drovers caboose and is typical of the way cabooses were used on freight trains during the 1920's and 1930's. The caboose was a home away from home for the train crew and the stock hands when livestock was being transported to market. It contains bunks, tables, a stove, an ice chest, and toilet facilities. These is also a desk where the freight conductor would handle his paperwork. The “cupola” (the enclosed area atop the caboose) afforded the brakeman a clear view of the train ahead. No. 1314 was retired in 1955.

Notes: Traded for UP Big Boy No. 4014, which was reacquired in 2013 and restored to operating condition in May 2019. This locomotive is the only operational rolling stock on the premises.

Notes: This Southern Pacific class SP-2 type 4-10-2 locomotive was presented to the museum early in 1956. It was originally designed for passenger service to pull trains up the steep grades on Southern Pacific's “Overland” route. No. 5021 later joined its 48 sister engines in freight and helper service in California, Arizona and New Mexico. Its last revenue service was between Portland and Eugene, Oregon in 1955. No. 5021 is a three cylinder locomotive which means she had a third cylinder located between the two main cylinders. This powered a connecting rod to the second axle of the drivers. These locomotives had a distinctive six-beat exhaust sound, quite different from the conventional steam locomotives. This locomotive also has a trailing truck booster consisting of two small cylinders which could be engaged to help startup heavy trains. The 5021 is the last one of its type and is one of four remaining examples of this three cylinder configuration.

Notes: Built in 1950 as URTX 37964 by General Transportation Co. Refrigerator cars used ice to keep its perishable contents cool during transport. Part of a series of fifty, this car was in service to Milwaukee Road and carried a Chicago, Milwaukee, St. Paul and Pacific herald. During November 1962, the Milwaukee shops rebuilt the car with meat racks for shipping sides of beef. The car was renumbered URTX 66637 and was painted bright yellow with the large red Oscar Meyer logo on the right side of the door. It was in this service for one year and then leased to the Cudahy Co. The car was returned to its original “Hiawatha Orange” color and renumbered to URTX 67806. Later, it was leased to the Swift Co. who then donated it to the museum in 1991.