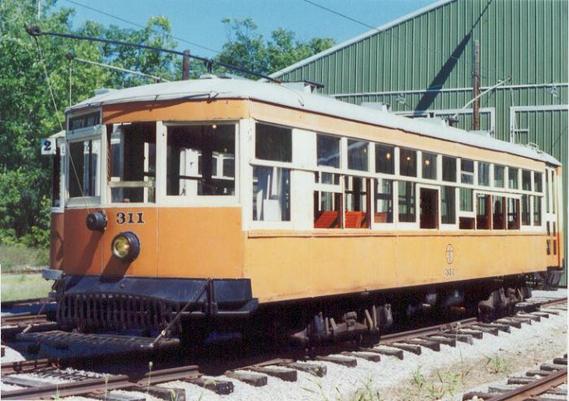 Johnstown Traction No. 311, the Rockhill Trolley Museum's first acquisition in its collection.

Founded in 1960, the museum collects and restores traction equipment (trolley, interurban and transit cars). The museum operates what has been historically referred to as the Shade Gap Electric Railway to demonstrate the operable pieces in its collection. "Shade Gap" refers to the name of a branch of the East Broad Top Railroad, from whom the museum leases it property.

"Railways to Yesterday Inc." is the corporate name of the organization, and for some years the museum operated under the name directly, until a desire to acknowledge and enhance its relationship with its hometown and help provide mutual promotional support resulted in its new operating name.

The museum season runs from Memorial Day weekend through October and is open additionally for special events during the holiday season, such as Polar Bear Express and Santa's Trolley.

The East Broad Top Railroad is across the street from the museum. The two organizations are not formally affiliated, and tickets are not cross-honored. However, both organizations share volunteers and labor expertise between them. The railroad has not operated public excursions since December 2011 and has operated no excursions since October 2013.

Remarks: Acquired in a trade wherein the National Capital Trolley Museum received Snow Sweeper No. 09 from the museum.

Remarks: Retired 1988, last operating trolley snowplow in the United States outside of a museum.

Remarks: First car of the museum.

Remarks: Sold to Philadelphia Broad Street Subway for $10,000 following the formation of the PATCO Speedline in 1968.

Condition: Not in use

Condition: Not in use