R-9 "Arnines" NYC Subway Car
R9's (sometimes referred to as "Arnines") are the 1,703 similar New York City Subway cars built between 1930 and 1940 for the Independent Subway System. The "Arnines" name comes from the literal spelling out of the final contract under which these 1,703 cars were ordered - contract "R9". The last of the cars in this broad grouping were removed from passenger service in 1977. Many pieces of memorabilia, including rollsigns and car number plates, exist today in private collections.

The complete listing of contract numbers for cars referred to as “Arnines” include: R1, R4, R6, R7/A and R9. Also in the Arnine family was the R8A, which was a revenue collection car, or Money train.

The cars that remain on New York City Transit Authority property (and their owners) are:

The other cars are located at the following locations:

R1 175 is at Seashore Trolley Museum
R4 800 is at Seashore Trolley Museum
R4 825 is at the Trolley Museum of New York
R6 978 was sent to Golden's Deli in the Staten Island Mall and used as a dining room, until the Deli was closed in January 2012. The owners of the Deli have placed it in storage, but have ultimately decided to sell the car. The car was successfully sold and is being restored by a private owner.
R6 983 was on private property in Jacksonville, FL for over 35 years after being purchased from the scrapyard in 1975 for use as a sidefront in a disco. It was purchased by the Craggy Mountain Line based in North Carolina in early 2013 and will be restored to operating service for their museum.
R6 1144 is at Buckinghamshire Railway Centre, England, United Kingdom
R7 1440 is at Seashore Trolley Museum
R9 1689 is at Shore Line Trolley Museum and is in operable condition
R9 1801 is at the New York State Museum, whose parts were used to restore 1802 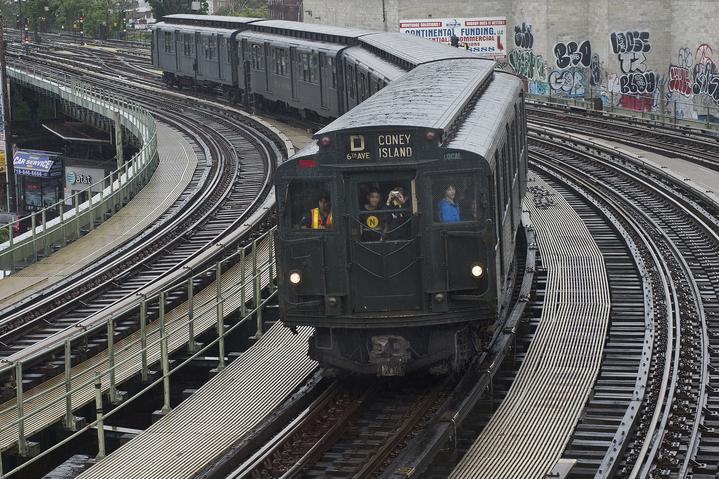 A Transit Museum set of R9's on an excursion trip. The MTA celebrated the centennial anniversary of the now-defunct Brooklyn-Manhattan Transit Corporation (BMT) with special nostaligia rides on Saturday, June 27 and Sunday, June 28, 2015. Four trains that were in service decades ago carried customers from the Brighton Beach Q station in Brooklyn on non-stop loops. Photo: Metropolitan Transportation Authority / Patrick Cashin.   By Metropolitan Transportation Authority of the State of New York - BMT 100 Nostalgia Ride, CC BY 2.0, https://commons.wikimedia.org/w/index.php?curid=42229179