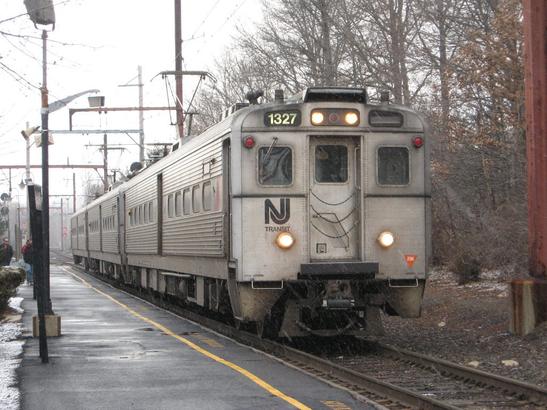 Jersey Arrow Railcar
The Jersey Arrow is a type of electric multiple unit (EMU) railcar developed for the Pennsylvania Railroad, and used through successive commuter operators in New Jersey, through to New Jersey Transit. Three models were built, but only the third model is in use today. The series is similar to SEPTA's Silverliner series, but include center doors among other differences in details.

Arrow I
The first series of Arrows (classed MA-1A or PRR MP85E6) were built in 1968-69 by the St. Louis Car Company; 35 were built and purchased by the New Jersey Department of Transportation (NJDOT). These cars were initially numbered 100-134. These cars were built with higher capacity 3-2 seating which caused grumbling by the passengers at that time.

In 1966 the NJDOT ordered 35 PRR "MP85" class MU cars from St. Louis Car for high speed service between New York and Trenton with a design based on the SEPTA/PSIC (Passenger Service Improvement Corporation) Silverliner III units then under order from St. Louis Car. The first two cars (100 and 101) were delivered in August 1968 and passenger service for the new Jersey Arrows began October 30, 1968. The body and structure (except end sills and bolsters) was all stainless steel. The stainless sheetmetal that made up the sides, ends and roof were load-carrying as part of a integral (monocoque) structure with the stainless center sill.

Although these cars bear some resemblance to the Silverliner III also produced by St. Louis Car at the time, they are very different mechanically. They featured diamond-shaped twin-arm Stemmann pantographs, rounder windows, a right-side operating controls, center doors, and a different body shape. The Arrow I used Westinghouse SCR "Tracpak" propulsion units with 700 HP per car with four motors; while the Silverliners had GE air-cooled Ignitrons.

Car 107 caught fire early in its career and was scrapped. Car 105 was also severely damaged in a collision in the East River Tunnel near New York Penn Station in 1975. It was stored in Sunnyside Yard until the mid 80s, when it was scrapped.

During 1976, 19 of the 33 surviving Arrow Is were rebuilt to be compatible with the new Arrow IIs. This involved the replacement of Symington-Wayne SW800 "hook type" couplers with the Wabco N2A couplers used by subsequent Arrow MUs. As they were rebuilt, they were renumbered 500-533, with car 134 being renumbered 507 to account for the loss of 107.

A further renumbering of the Arrow Is to 1200-1233 was planned, however this was never implemented as the Arrow Is were instead retired. The Arrow Is were stored as the Arrow IIIs arrived from General Electric. All cars were out of service by 1980 due to reliability issues with their Westinghouse control equipment. These problems were a result of poor wiring and frequent electrical grounds.

Comet IB conversion
The Arrow I cars sat unused until 1986. Realizing that the car bodies still had many decades of service left on them, New Jersey Transit made the decision to have them rebuilt into locomotive-hauled coaches, nicknamed Comaro coaches. In 1987 and 1988 30 cars were converted into the Comet IB cab control cars and trailer coaches by Morrison-Knudsen at the Hornell, New York shop. Three Arrow I cars, 519, 521 and 523, were heavily damaged by arson, and were salvaged for use in the Comet IB program before being scrapped. The rebuilt Comet IB cars remained in service for two decades (first on Newark Division diesel service, and then transferred to Hoboken Division diesel lines in 2005) before being retired by New Jersey Transit in late 2008, with some now leased or sold, and others since scrapped.

14 have found new life through yet another rebuilding, on Amtrak California (Caltrans) as interim coaches. Cabs were removed from the 12 cab cars, and the interiors rebuilt to resemble Amtrak coaches, with 64-passenger intercity seating installed in place of the old commuter seating. The 14 rebuilt Caltrans Comet IBs were overhauled and delivered between 2013 and 2014 and are in service on the San Joaquin line.

Arrow II
In 1974, General Electric produced 70 Arrow II cars in the married pair format, classed MA-1G. These cars were built in GE's Erie (PA) shops with car shells from Avco. The Arrow IIs were numbered 534-603. They were purchased specifically to replace the ancient PRR MP54s, which were slowly phased out of New Jersey service in late 1977.

The Arrow IIs were constructed following the production of SEPTA's single unit Silverliner IVs, but prior to the Married Pair Silverliner IV units. Indeed, the Arrow II and the Silverliner IV share the same body shell, cab corner air scoops and single-arm Faiveley pantographs, with the primary differences being the shorter air intake hump on the roof, corresponding lack of dynamic brakes, and the inclusion of the high-level center door as on the Arrow I.

One important feature was the 2-2 seating, which was a result of passenger complaint over the 3-2 seating on the Arrow I. The Arrow IIs also featured a toilet in the B-car.

Upon the formation of NJ Transit, the Arrow IIs were called back to New Jersey. The Arrow IIs had been well worn during their time with Amtrak, and required a thorough overhaul.

Work began at Morrison Knudsen in January 1983, with the cars receiving several upgrades for compatibility with the Arrow IIIs. Almost every part was rebuilt or upgraded, including brakes, couplers, motors, gearboxes, and electrical gear. Among some of the noticeable changes, the 2-2 seats were replaced with 3-2 seats, increasing the capacity of the A-car from 100 to 119, and the B car from 96 to 113. In addition, the B-car featured a fold up handicap seat. The toilets were also rebuilt. The sliding doors were rebuilt to be compatible with Arrow III circuitry, and to be sensitive to objects they encounter when closing. The window glass was replaced with polycarbonate glazing. End strobes, new marker lights and a new pilot were installed on the cab ends, and the key operated locks were all standardized to match the Erie Lackawanna coach keys as used on the Arrow III. Finally, the main transformers were cleaned of PCBs and replaced with an EPA approved substitute.

The Arrow IIs briefly returned to service on the Newark Division, but were ultimately reassigned to the Hoboken Division for the rest of their service lives. In 1997, the decision was made to retire them due to rotting floors and holes in the roofs, with ALP44s and Comet IV coaches (ordered for Midtown Direct service) in push-pull configuration as replacements. Most were scrapped in 2001. One pair (1236-1237, renumbered to 602 and 601) remains (however split) as part of SEPTA's wire inspection train.

Arrow III
The Arrow IIIs were built in 1977 and 1978 by General Electric in the same fashion as the Arrow IIs. They consist of 200 cars built as married pairs (1334–1533) and 30 single cars (1304–1333). These cars were initially ordered as part of a plan to rehabilitate the NJDOT (Later NJ Transit's) Hoboken division, converting the 3,000 volt DC system to a 25 Kv 60 Hz AC system. However, due to the retirement of the Arrow I MUs, and the Arrow IIs frequently being leased to Amtrak and MARC, as well as delays to the rehabilitation of the Hoboken electrification, the Arrow IIIs were assigned to the former Penn Central electrified lines instead. As a result, the Arrow IIs and only a portion of the Arrow III fleet were devoted to the Hoboken division when the electrification work was finally finished in 1984, with the remaining Arrow IIIs being assigned as the only MUs in service on the Northeast Corridor and North Jersey Coast Line. Due to the lack of an automatic transformer tap changer, the Arrow IIIs cannot switch between line voltages while in service. To prevent confusion a triangular orange sticker with the current voltage the unit is set to is affixed under the front window, "12K" for the Newark Division and "25K" for the Hoboken Division. After the North Jersey Coast Line was changed to 25kV south of Matawan, MU service to Long Branch was replaced by push-pull trainsets only.

The Arrow III's body shell is similar to the Silverliner IV and Arrow II. However, the Arrow IIIs have some prominent differences, notably the two small air intake blisters (as opposed to the large humps on prior models). The Arrow IIIs also featured the twin-arm Stemmann pantographs as on the Arrow Is, built by the United Knitting Machine corporation. The large central air scoop over the center of the roof on each cab end is the final major spotting feature. Additionally, the Arrow IIIs saw the return of 3-2 seating.

The Arrow IIIs were given a mid-life overhaul between 1992 and 1995 by ABB. The rebuild replaced the original DC propulsion system with a new solid state AC system that also included higher power traction motors with a total of about 375 hp per two axle truck. The increased power per motor allowed for motors to be eliminated from the truck located under the pantograph in each of the married pairs, reducing the number of powered axles per pair to 6 although raising horsepower to 1125. Single units retained all 4 powered axles with a total of 750 hp. After the rebuild was completed, problems were encountered with both traction motor and axle bearingoverheating which lowered the maximum permitted speed in service to 90 mph from 100 and then ultimately to 80 mph as the problems persisted. In 2011 a single arm TransTech type pantograph was fitted to Arrow III No. 1463 replacing the original twin-arm Stemmann. By early 2014, all 160 units remaining in revenue service had been fitted with the new pantographs.

New Jersey Transit intends to replace all Arrow III railcars with self-propelled railcars similar in design of the Bombardier Multilevel coach by 2020. 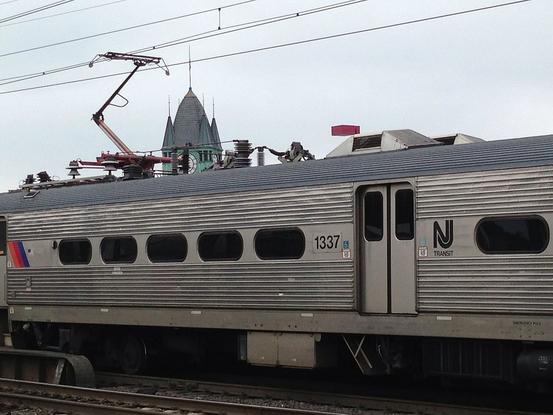 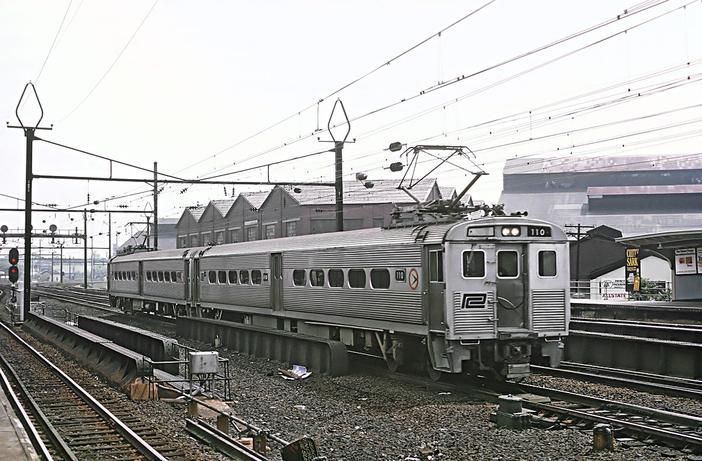 Arrow II cars on their way to Washington for Washington-Baltimore commuter service in use as a demonstration run of Amtrak's Chesapeake service. The Chesapeakeused Arrow II and Arrow III cars in normal service.  By Martin Kuhn - Amtrak NEWS, May 1978, Public Domain, https://commons.wikimedia.org/w/index.php?curid=50739580 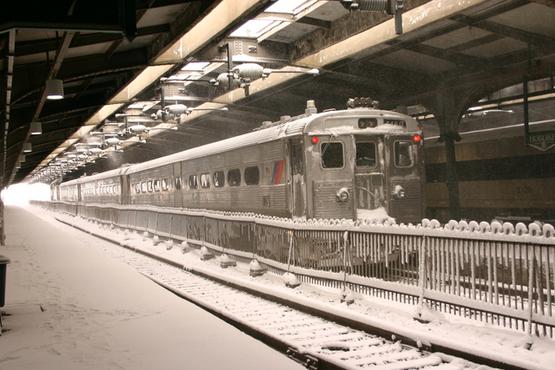 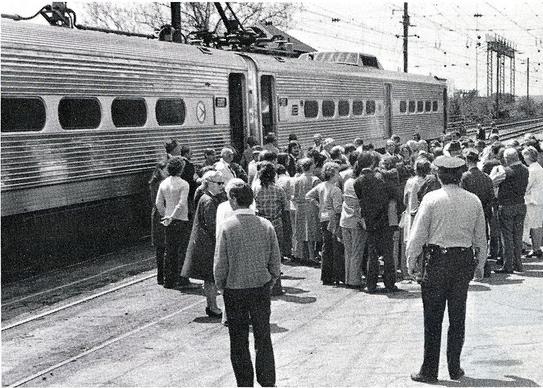 Penn Central Jersey Arrow I No. 110 leads a commuter train through Harrison station in July 1969. No. 110 would later be converted to a Comet IB, which served as NJT 5161 and Amtrak 5004.  Photo by Roger Puta