An Astra-Dome lounge-observation car brings up the rear of the City of Los Angeles in the 1950's. 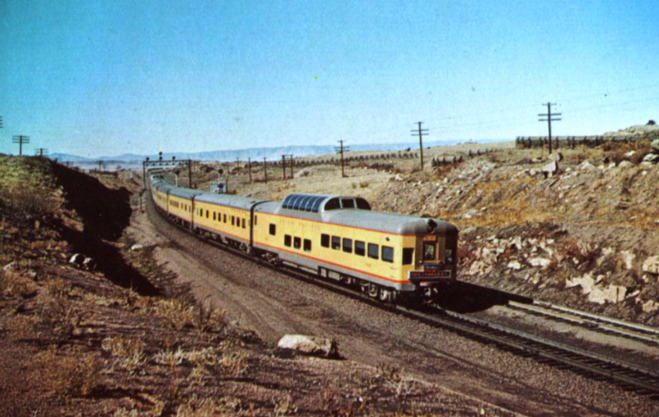 Astra-Dome Passenger Car
The Astra-Domes were a fleet of streamlined dome cars built by the American Car and Foundry Company ("ACF") for the Union Pacific Railroad in 1954–1955. ACF built a total of 35 cars including coaches, dining cars, and observation cars. After the Union Pacific exited the passenger business in 1971 the Auto-Train Corporation purchased most of the fleet and operated them for an additional ten years. These cars should not be confused with the cars used on the Train of Tomorrow.

Design
Pullman completed the first four production dome cars for GM's Train of Tomorrow in 1947. The four cars, dubbed Astra Liners, included a coach, diner, sleeper and lounge-observation, were similar to Silver Dome and were displayed to the press on numerous private charters and to the public at the Chicago Railroad Fairs in 1948 and 1949 before they were sold to Union Pacific Railroad for use between Portland, Oregon and Seattle, Washington.

ACF produced three types of domes for the Union Pacific: coaches, dining cars, and observation cars. The ten dining cars were unique: the only dome dining cars (aside from GM's Train of Tomorrow) ever built for a United States railroad. The cars featured seating on both levels: 18 in the upper level in booths and 18 in the lower level at tables. Also located on the lower level was a kitchen, pantry, and private dining room with seating for 10. A dumbwaiter connected the two levels.

The coaches could seat 24 in the dome area and an additional 36 in the lower level. The center section was given over to men's and women's lounges. The lounge-observation cars were square-ended instead of the rounded-off design favored by many railroads. Like the coaches, the upper-level dome area could seat 24. In the lower level, starting at the vestibule end, was a card room (seating for five), cocktail lounge (seats for nine) and bar, stairs up to the dome level, and finally the observation area itself with seating for 19.

Service history
The Union Pacific was a comparative latecomer to the dome scene when it ordered the Astra Domes from ACF in 1954; most western railroads already operated domes, some since the late 1940's. ACF delivered the 35 cars to the Union Pacific in 1955 at the cost of $10,000,000. The Union Pacific assigned the cars to its various transcontinental streamliners:

The Union Pacific found it necessary to assign a second steward to the upper-level dining area. The Union Pacific gave great publicity to the novelty of dome dining cars operating between Chicago, Portland, Oregon and Los Angeles.

After the Union Pacific exited the passenger business in 1971 it sold two of the dome coaches (No. 7004 and No. 7008) to the Alaska Railroad for use on its AuRoRa streamliner. UP retained dome coach No. 7006 and dome lounge-observation No. 9004 for company use and donated dome diner No. 8003 to the National Railroad Museum in Green Bay, Wisconsin, where it remains today. The remainder of the fleet–seven coaches, nine dining cars and fourteen lounge-observation cars–were purchased by the new Auto-Train Corporation for use on the Auto-Train. After Auto-Train's bankruptcy in 1981 the fleet was sold and dispersed. Many remain in private hands.