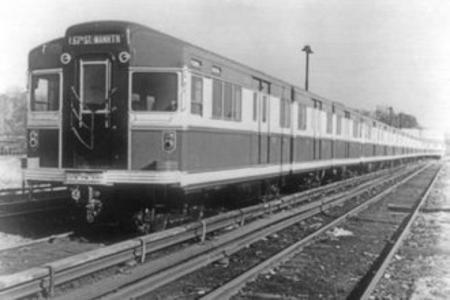 Design
The articulated unit, 80 feet (24.38 m) long, 10 feet (3.05 m) wide and 12 feet (3.66 m) high, consisted of  three compartments placed on four trucks, connected by fully enclosed, hinged passageways. The Bluebird was an example of Art Deco industrial design, presenting a clean and mildly streamlined appearance. The Bluebird was designed during the Great Depression as a fast, physically attractive and comfortable mass transit vehicle that would attract passengers, while instituting significant economies in production, operation, and maintenance.

The car's lightweight body and running gear, combined with its short truckbase and segmented body, permitted it to operate on the oldest elevated structures, with their light loading tolerance and sharp curves, as well as in tunnel sections, where policy prohibited the use of the wooden cars typically used on elevated lines.

A single Bluebird unit, numbered 8000, was purchased by the BMT as a prototype for a planned fleet of equipment that could operate universally on both standard subway lines and older elevated lines. The BMT expected the Bluebird to preserve its investment in its elevated railway lines without expensive upgrading for heavier subway equipment, while attracting passengers with its interior comforts. Tests demonstrated that its greatly improved operating parameters could have cut significant time from existing elevated train schedules.

Bluebirds were the first PCC rapid transit cars utilizing the advanced running gear originally created for new-design streetcars. In addition to quick acceleration and braking (4 mph/s or 6.4 km/(h⋅s)), use of PCC technology meant that Bluebirds could share a significant parts and maintenance base with the Brooklyn transit company's planned PCC trolley fleet, achieving economies of scale and efficiency.

The Bluebirds were built by Clark Equipment Company of Battle Creek, Michigan, maker of PCC running gear. They were the only rapid transit cars ever built by Clark, and the only passenger rail equipment ever built by the company, other than one PCC streetcar.

Fleet
Satisfied with tests on unit 8000, the BMT placed an order for an additional 50 units, which could replace 80 old elevated cars. However, the order was cancelled after New York City purchased the BMT in June 1940. The City's Board of Transportation, already the operator of the Independent Subway System, was one of the most conservative transit operators in the United States, and had no interest in the former BMT's aggressive technology planning.

Under NYC ownership
Five Bluebirds were in the process of construction at the time of cancellation, and the City decided to accept these, numbering them 8001-8005. They couldn't interoperate with No. 8000, which had no couplers or multiple unit trainline connections. The single-unit 8000 spent much of its service life on the Franklin Avenue Shuttle, home of many pieces of orphaned equipment, while the train of Bluebirds operated regularly on the BMT Canarsie Line. On occasion the train also operated in Brighton-Franklin Ave. Local service and on the Fourth Ave. Local. It probably in those instances operated as an extra behind a regular interval.

After delivery of the Bluebirds, New York City never again purchased any lightweight, articulated or PCC technology rail equipment, nor did it purchase equipment to sustain the lines and portions of the elevated system incapable of operating subway cars. Most of the elevated lines were dismantled between 1940 and 1975.