Dining Car
A dining car, also a called a diner, is a railroad passenger car that serves meals in the manner of a full-service, sit-down restaurant.

It is distinct from other railroad food service cars that do not duplicate the full-service restaurant experience, such as cars in which one purchases food from a walk-up counter to be consumed either within the car or elsewhere in the train. Grill cars, in which customers sit on stools at a counter and purchase and consume food cooked on a grill behind the counter are generally considered to be an "intermediate" type of dining car.

History
Before dining cars in passenger trains were common in the United States, a rail passenger's option for meal service in transit was to patronize one of the roadhouses often located near the railroad's "water stops". Fare typically consisted of rancid meat, cold beans, and old coffee. Such poor conditions discouraged many from making the journey.

Most railroads began offering meal service on trains even before the First Transcontinental Railroad. By the mid-1880s, dedicated dining cars were a normal part of long-distance trains from Chicago to points west, save those of the Santa Fe Railway, which relied on America's first interstate network of restaurants to feed passengers en route. The "Harvey Houses", located strategically along the line, served top-quality meals to railroad patrons during water stops and other planned layovers and were favored over in-transit facilities for all trains operating west of Kansas City.

As competition among railroads intensified, dining car service was taken to new levels. When the Santa Fe unveiled its new Pleasure Dome lounge cars in 1951, the railroad introduced the travelling public to the Turquoise Room, promoted as "The only private dining room in the world on rails." The room accommodated 12 guests, and could be reserved anytime for private dinner or cocktail parties, or other special functions. The room was often used by celebrities and dignitaries traveling on the Super Chief.

Edwin Kachel was a steward for more than twenty-five years in the Dining-Car Department of the Great Northern Railway. He said that "on a dining car, three elements can be considered — the equipment, the employee, then passenger." In other words, "the whole is constituted by two-thirds of human parts." As cross-country train travel became more commonplace, passengers began to expect high-quality food to be served at the meals on board. The level of meal service on trains in the 1920s and 1930s rivaled that of high-end restaurants and clubs.

Food
Elegance is one of the main words used to describe the concept of dining on a train. Use of fresh ingredients was encouraged whenever possible. Some of the dishes prepared by chefs were: Braised Duck Cumberland, Hungarian Beef Goulash with Potato Dumplings, Lobster Americaine, Mountain Trout Au Bleu, Curry of Lamb Madras, Scalloped Brussels Sprouts, Pecan and Orange Sticks and Pennepicure Pie to name a few items.

In the dining cars of Amtrak's modern bilevel Superliner trains, booth seating on either side of a center aisle occupies almost the entire upper level, while the galley is below; food is sent to the upper level on a dumbwaiter.

Dining cars enhance the familiar restaurant experience with the unique visual entertainment of the ever-changing view. While dining cars are less common today than in the past (having been supplemented, or in some cases replaced altogether by other types of food-service cars) they still play a significant role in passenger railroading, especially on medium- and long-distance trains.

Today, a number of tourist-oriented railroads offer dinner excursions to capitalize on the public's fascination with the dining car experience. 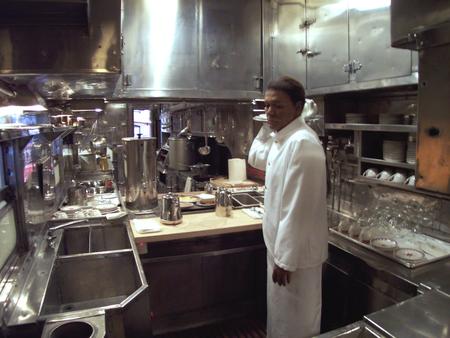 This Burlington Zephyr dining car Silver Spoon belongs to the National Museum of Transport in St. Louis. It was part a later vintage of Zephyr trains, which had more conventional cars. The original Burlington Zephyrs from the mid/late 1939s were fixed trainsets with a set of wheels joining each pair of cars, rather than each car having two sets of wheels. The Budd Company built this dining car in 1938; it seated 48 and was numbered as CB&Q No. 192. October 11, 1975. Photo by Roger Wollstadt.  By Roger Wollstadt from Sarasota, Florida [CC BY-SA 2.0 (https://creativecommons.org/licenses/by-sa/2.0)], via Wikimedia Commons

The beautiful Turquoise Room on Santa Fe's Super Chief in 1955. 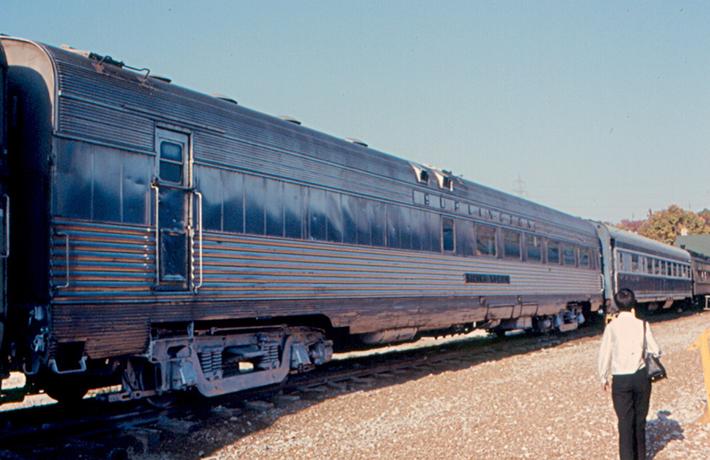 The pantry aboard former Santa Fe dining car No. 1474, the Cochiti. Over a million meals were served in the car, which remained in service through the late 1960s. 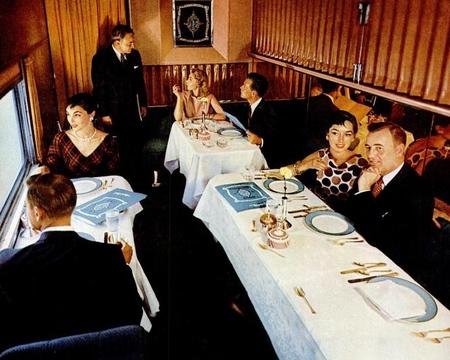