Hi-Level Passenger Car
The Hi-Level is a type of bi-level intercity railroad passenger car built by the Budd Company for the Atchison, Topeka and Santa Fe Railway ("Santa Fe") in the 1950s and 1960s. The first two coaches entered service on the El Capitan in 1954 and found immediate success. Budd built sufficient coaches, dining cars, and lounge cars to fully re-equip the El Capitan, with additional coaches seeing use on the San Francisco Chief. Amtrak inherited the entire fleet in 1971 and continued to use the equipment on its western routes. In 1979, the first Superliners, based on the Hi-Level concept, although built by Pullman-Standard, began entering service. As of 2013 Amtrak continues to operate five Hi-Level lounges, which it calls the "Pacific Parlour Cars", on the Coast Starlight.

Background
The Santa Fe introduced the El Capitan in 1938. The train ran on the Santa Fe's main line between Chicago and Los Angeles. Unusually for streamliners of the period, the El Capitan carried coaches only, and had no sleeping cars. Passengers flocked to the new train, and the Santa Fe added cars to meet the demand. The train grew from five cars in 1938 to fourteen in 1952. Sometimes demand was high enough to justify running a second instance ("section") of the train on the same day. The Santa Fe sought a solution to increase the capacity of the train without lengthening it further. Two popular innovations by the Chicago, Burlington and Quincy Railroad (CB&Q) suggested a solution. First, in 1945, the CB&Q introduced the first dome car, in which passengers rode on a second level high above the tracks, affording better views. Second, in 1950, it placed bi-level rail cars in commuter service in the Chicago area. Taken together, these innovations suggested a new possibility: a long-distance bi-level coach, with greater capacity than single-level cars, and the panoramic views of a dome.

Design
The Hi-Levels stood 15.5 feet (4.7 m) high, 2 feet (0.61 m) taller than most conventional equipment. Seating occupied the entire upper level, with restrooms, baggage, and other non-revenue areas on the lower level. In most cars, vestibules connected the upper levels only. A central staircase linked the two levels. Hi-Levels featured a row of windows across the upper level; on the prototype coaches, this row slanted inwards. The two-level design offered several advantages over conventional single-level equipment. Budd and the Santa Fe expected the upper level, located 8 feet 7 inches (2.62 m) above the rails, to provide a smoother, quieter ride for passengers. With the lower level free of passengers, designers could provide larger restrooms and baggage areas. Finally, the lower level contained all the electrical equipment, away from the passengers, and with easy access for maintenance. The cars cost $275,000 each.

Originally, Budd built the Hi-Levels with steam heating. When Amtrak began converting its inherited fleet to head-end power in 1970s, the Santa Fe handled the conversion of the Hi-Levels in its Topeka, Kansas, shops. Of the 73 Hi-Levels, all but three underwent the conversion.

Coaches
The 61 coaches could carry either 68 or 72 passengers, half again more than the 44 of comparable single-level long-distance coaches. This increased capacity permitted the Santa Fe to run the El Capitan with fewer cars, while increasing the total number of passengers carried. The 68-seat coaches featured "step down" stairs at one end to permit access to standard-height equipment; that space was given over to four additional seats on the 72-seat coaches. The prototypes also featured step-down stairs, but carried one fewer passenger. In the prototypes the upper level had no restrooms; in response to passenger feedback, Budd added a restroom to the upper level in the production models. The prototypes also included a "step up" from the aisle to the coach seats; in the production cars, the seats rested flush with the aisle. Each coach weighed 80 tons.

Lounges
Each of the six lounges could seat 60 on the upper level, with additional seating on the lower level. Nicknames for these cars included "Top of the Cap" and "Sky Lounges". A glass top across two-thirds of the car distinguished it from the rest of the Hi-Levels. The lower level featured the "Kachina Coffee Shop" and a lounge area with seating for 26. The lounge cars weighed 83 tons.

Dining cars
Six dining cars were built. Each dining car seated 80 (all on the upper level), compared to 36 in a single-level diner. The lower level housed the kitchen; dumbwaiters carried food to the upper level. The dining cars, the largest single-unit dining cars ever built, weighed 97 tons and rode on six-wheel trucks.

These constituted five equipment sets ("consists"), sufficient for daily service on the El Capitan beginning on July 8, 1956. A typical train comprised two step-down coaches, five standard coaches, a lounge and a dining car. The Hi-Level cars continued in service after the Santa Fe combined the El Capitan and Super Chief in 1958. The Santa Fe also converted six single-level baggage cars to baggage-dormitories (3477–3482), with a spoiler at one end to create a visual transition.

Amtrak
Amtrak took over operation of most intercity passenger service in the United States in 1971, including the Santa Fe's remaining trains. It acquired the entire Hi-Level fleet and continued to operate them. Amtrak used the Hi-Levels as the basis for the design of the Superliners it ordered from Pullman-Standard, which began arriving in 1978. In the 1980s, Amtrak rebuilt many of the coaches as dormitory-coaches, with half of the car given over to crew space. Several Hi-Level coaches remained in service into the 2000s on the Heartland Flyer. Amtrak refurbished five of the six lounges for use on the Coast Starlight as sleeping car passenger-only lounges, branded as the "Pacific Parlour Car." As of 2016, they are the last Hi-Levels in regular service. 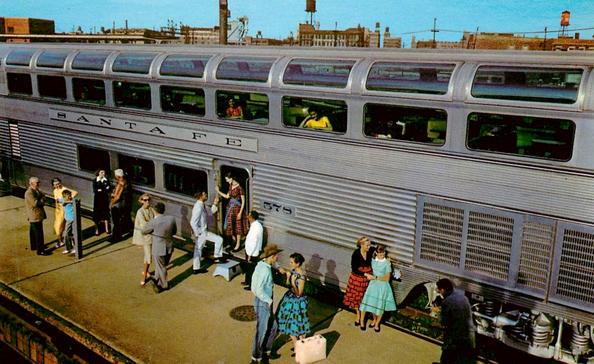 One of Amtrak's Pacific Parlor Cars, originally built for Santa Fe in the middle '50's. 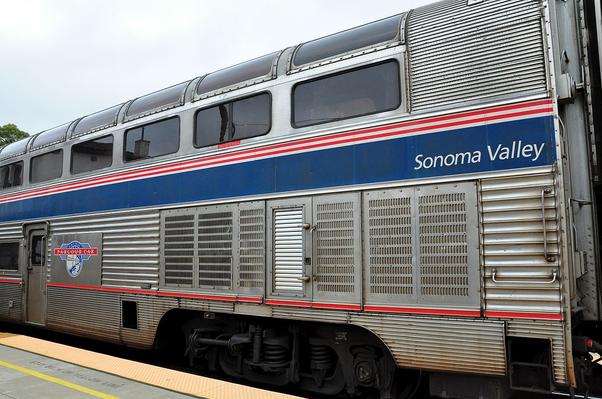