M2 Cosmopolitan Electric Multiple Unit Railcar
The M2 is a series of 244 electric multiple unit cars produced for the Metropolitan Transportation Authority and the Connecticut Department of Transportation that run on the New Haven Line (then part of Penn Central, now part of Metro North). Built primarily by General Electric in a consortium with the Budd Company and Canadian Vickers between 1972 and 1977, the cars were initially branded as Cosmopolitans. Final assembly of the M2 cars using Budd or Vickers bodies was completed at GE's Transportation Division in Erie, Pennsylvania.

Both the model and brand name followed the pattern set up by the M1/M1A series (the Metropolitans) in use on the Long Island Rail Road (M1) and on Metro-North's Hudson and Harlem lines (M1A). In the late 1980s and early 1990s, the M2 design was licensed by the MTA and ConnDOT to two other companies to produce follow-up series.

All cars were equipped with GE 1259 DC motors with a rated output of 162 horsepower on all axles.

M2 series
The M2 Cosmopolitan series (Nos. 8400-8849) replaced EMU cars dating from the early 1920s to 1954, including the Pullman 4400-series. These were originally manufactured for, and inherited from, the New York, New Haven and Hartford Railroad. As with the cousin M1 series, the M2s accompanied an overhaul of the long-neglected main line and the New Canaan Branch in which longer, high level platforms were introduced along with other infrastructure improvements.

Aside from the technical differences of the New Haven Line (electrification via overhead catenary instead of third rail), the cars are similar to the sister M1A order and, in times of equipment shortages or severe weather, the M2s have run on the Hudson and Harlem lines. Most of the other differences are in the interior and exterior appearance of the cars, such as red striping on the exterior rather than blue, the interior wallpaper having both the New York and Connecticut state seals and the obvious pantograph and mechanical apparatus on the roof. Both the MTA and ConnDOT purchased bar cars, but complaints from riders from stations in New York, coupled with arrival of new equipment on the Hudson and Harlem lines, led to the conversion of the ten MTA-owned bar cars to standard coaches. The ten ConnDOT-owned bar cars, which ran on express trains to New Haven, Stamford, South Norwalk and New Canaan, remained in service during weekdays until May 2014.

M4/M6 series
After the LIRR and Hudson/Harlem lines received an updated version of the original Metropolitan series of cars in 1984-86 (the LIRR M3 and Metro North M3A series), plans were announced for a similar undertaking on the New Haven Line. Originally, Budd was to produce these cars but pulled out in the wake of struggles that eventually led to the company's departure from railroad car manufacturing.

After Budd stepped away from the order, the rights to the M1/M3 and M2 designs were transferred to the MTA. With these rights, MTA and ConnDOT eventually awarded the order to Tokyu Car which produced 54 M4 cars (8900-series) in 1987-1988. Nearly identical to the M2s, Tokyu Car initially gave the "Triplex" brand name to the M4 cars to highlight their being a three-car set, as opposed to the married pairs of the M2s. These cars came to be known as "triplets" by railroad personnel.

In 1994, 48 M6 series cars (9000-series) were produced by Morrison Knudsen. Nearly identical to the M4s, these cars were completed at Hornell, New York with body shells from Mafersa. The M6s also featured distinctive chimes that sounded whenever the doors were closed, a feature that did not exist on the M2s or M4s. The M6s also had black framed windows, giving them the illusion of being larger than the windows on the M2s and M4s. The M6s were also commonly referred to as "triplets".

Retirement and replacement
By the start of the 21st century, the original Cosmopolitans began to reach the end of their expected service lives, with the oldest M2s having traveled over 1 million miles in all types of weather. It was then that the cars saw some of their most intense usage as the combination of increasing ridership and financial difficulties delayed the MTA and ConnDOT's abilities to fund replacement cars.

With the replacement of Rowland by Governor M. Jodi Rell in 2004, the process for a replacement series was expedited. After an earlier deal in principle with Bombardier Transportation fell through, Kawasaki Heavy Industries was awarded a contract in July 2006 to produce the M8 series, which began to enter service in late 2010. The 405 cars are based on the M7/M7A series much as the M2s were based on the M1 series, though with some interior improvements and a different front end.

The M2, M4, and M6 trains were replaced, retired, and scrapped between 2012 and July 2015. In May 2014, Metro-North retired the bar cars, with the last one departing Grand Central Terminal at 7:07 PM on May 9th. Since then, there have been several proposals to reintroduce bar cars by retrofitting the new M8 fleet. By July 6, 2015, all M4s and M6s were retired. 24 M2 rail cars remain in service on weekdays arranged in 3 trains of 8 cars each. Otherwise all service is provided by the new M8 Kawasaki fleet. 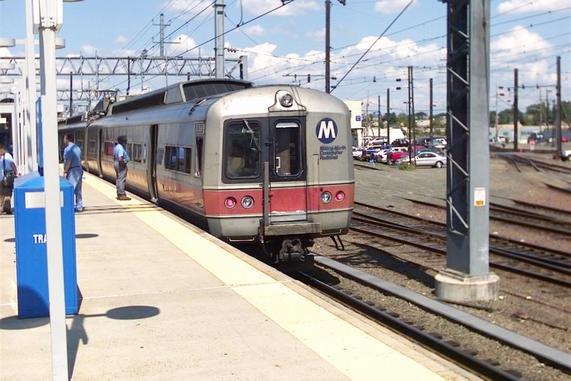 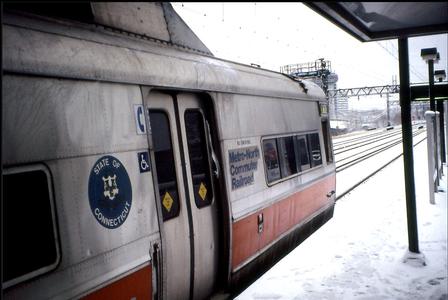 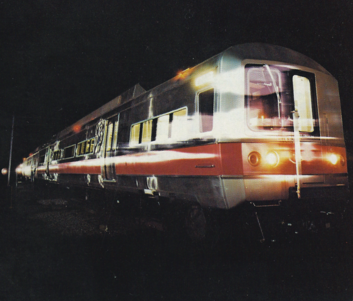 By Mobilus In Mobili (Stamford) [CC BY 2.0 (http://creativecommons.org/licenses/by/2.0)], via Wikimedia Commons