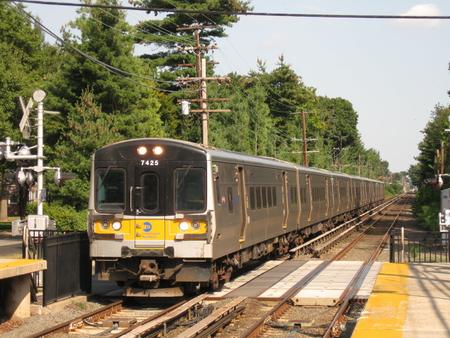 M7 Electric Multiple Unit Railcar
The M7 is an electric multiple unit railroad car built by Bombardier, with delivery beginning in 2002, used by the MTA on the Long Island Rail Road (M7) and Metro-North Railroad (M7A). The M7 replaced the M1 railcars, which had previously provided electric service on these lines. The M7 are powered from an electric third rail. An eight-car set of M7s cost $18 million each.

Cars are arranged as married pairs, where each car contains a complete set of controls for an engineer, conductor, or brakeman. However, the 'B' Cars (denoted by odd-numbered car designations) contain a handicapped accessible restroom, which is larger than the restroom provided on the M1 and M3 railcars and designed to accommodate a wheelchair, as well as an attendant and/or service animal (such as a guide dog, hearing dog or service dog) accompanying the passenger. The enlarged bathroom reduces the number of seats in the car.

The M7 was built as two separate, but similar models owing to the different electrical and signaling systems on the LIRR and Metro-North. The M7 has AC traction motors and can accelerate more quickly from a standing stop than previous MU sets. The two different cars also contain different door-closing lights; the LIRR (Long Island Rail Road) has small red button-sized closing-lights, while Metro-North has white light strips. Unlike the M7s, the M7As have pads behind each headrest. On the M7, the seats face toward the center, but on the M7As, the seats face away from the center.

History
In late 1999, a contract was awarded to Bombardier for 836 LIRR M7s. Delivery began in early 2002, and test trains for the LIRR M7 began on the Ronkonkoma Branch. After several successful tests, LIRR M7 revenue service began on the Long Beach Branch on October 30, 2002 and Metro-North's first M7A started scheduled service in April 2004. All M7s were delivered in early 2007.

On February 3, 2015, an 8 car M7A trainset on Metro North's Harlem Line was involved in a level crossing collision with a car stopped on the tracks in Valhalla, New York. Sadly, six people were killed and at least fifteen were injured. Cab car No. 4333 was destroyed in the subsequent fire.

Early troubleshooting
The M7 cars swayed from side to side more than intended when introduced to service, and required modifications to reduce the sway. In late 2006 the MTA began a replacement of all M7 armrests after paying out over $100,000 to customers who filed complaints. The factory-installed armrests were notorious for slipping into trouser pockets and then tearing them when sitting. The new design is of a different profile and is coated in a more fabric-friendly rubber. Some passengers complained about having fewer seats per B car, a consequence of the larger ADA-compliant restrooms, and about the width of the seats. Metro-North's management received feedback about the M7, which influenced the development of the M8 railcars for the New Haven Line.

In the fall of 2006, the M7As started to experience serious braking problems due to foliage on the right-of-way, a condition known as "Slip-Slide." This caused nearly 2/3 of the Metro-North fleet to be taken out of service, due to flat spots on wheels. While the LIRR fleet performed significantly better, stripped M1s from both railroads were reactivated, and diminished schedules were instituted until the M7 fleet was able to resume full operation.

As of 2007, the M7 fleet has the highest mean distance between failures out of the entire LIRR fleet. 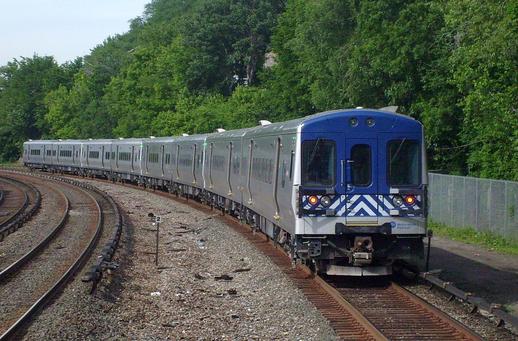