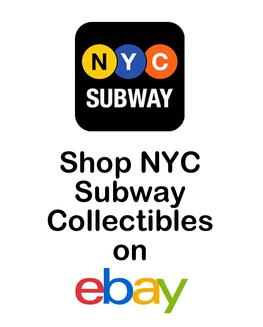 Description
The R32s are numbered 3350–3949, but some cars have been re-numbered outside of this range or to different numbers in this range. They were the first cars to introduce all-mylar route and destination rollsigns instead of the former cotton cloth or linen type rollsigns found on prior rail cars.

The R32 contract was divided into two subcontracts of 300 cars each: R32A (cars 3650-3949) and R32 (cars 3350-3649). The R32As were funded through the proceeds of a revenue bond while the R32s were paid for out of the 1963–1964 New York City capital budget. The two subcontracts differed only in interior lighting; the R32As had interior lighting featuring backlit ad-signs.

The R32s were the first mass-produced stainless steel cars built for the New York City Subway. Two previous Budd orders (the BMT Zephyr and the R11s) were limited production orders. The horizontally ribbed, shiny, and unpainted stainless exteriors of the R32s earned the cars the nickname Brightliners. The use of stainless steel reduced the weight of each car by over 4,000 pounds, when compared to previous models.

History
In June 1963, the New York City Transit Authority contracted with Budd for 600 IND/BMT cars (300 pairs) to replace older equipment (cars that had exceeded the TA's 35-year limit of age), including the BMT D-type Triplex articulated cars and some of the BMT Standards. At the time, this was the largest railcar order ever placed in the United States for subway cars. The cars were ordered for $68,820,000, of which half was provided by New York City and half through the sale of bonds by the New York City Transit Authority. Budd had bid on previous contracts with the NYCTA, but had never won a City contract for a production run of cars until the R32s, as Budd built only stainless-steel equipment and the TA refused to allow a differential in competitive bids for this higher-quality construction.

Budd won the contract by offering the lowest bid of $114,700 per car. The next lowest bidder came in at $117,900 per car, which was for low-alloy steel cars. Budd low-balled the price to win the contract and introduce stainless steel equipment to the modern New York City Subway system, a plan that was met with limited success. NYCTA allowed a premium for subsequent stainless steel contracts, and all subsequent equipment was at least partly constructed of stainless steel. However, the Budd Company never benefited from the change, as Budd failed to win further contracts from the NYCTA, and the company has since halted production of railroad cars.

On August 18, 1964, the NYCTA approved a modification to the 300 R32s already constructed. The modification was required to ensure proper clearance in tunnels. Since the cars were 4000 pounds lighter than other subway cars when new, they did not sink as low on standard trucks and springs. The modification involved the modification of the body bolster.

A ceremonial introduction trip for the new R32 "Brightliners" cars was held on September 9, 1964, operating from the New York Central Railroad's Mott Haven Yards in the Bronx to Grand Central Terminal in Midtown Manhattan. The new cars were then placed into service on the Q on September 14, 1964, after their New York Central's spring-loaded under-running third rail shoes were replaced with gravity-type overrunning subway third rail shoes. The R32s were originally assigned to the BMT Southern Division service only, initially on the Brighton Line (Q train) and the Sea Beach Line (N train), but were eventually reassigned to the West End Line (T and TT trains).

Cars 3946–3949 were delivered with Pioneer trucks and disc brakes in 1966. These trucks were replaced with standard trucks in 1976.

In 1974, cars 3700-3701 were sent to Garrett AiResearch's facilities in Los Angeles, California to have test out Flywheel energy storage system equipment. 3700 received energy conservation machinery with batteries and amber-type digital readout indicating the amount of energy used by the equipment, while 3701 remained un-modified. These cars were later tested at the UMTA, and the US Department of Transportation's Testing Facilities in Pueblo, Colorado for evaluation, and were returned to the MTA in 1976 for in-service testing on all BMT/IND Lines to check the effectiveness of the technology.

From 1988 to 1990, as part of the NYCTA General Overhaul (GOH) program, most of the R32 cars were rebuilt by Morrison Knudsen at its shops in Hornell, New York. Ten R32 cars, which have since been retired, were rebuilt by General Electric in its Buffalo, New York, facility. During the rebuilding process, the route and destination mylar rollsigns located above the storm doors were removed and replaced with Luminator flipdot electronic route signs that can display both letters and numbers, including zero. This is because the air conditioning evaporators mounted on the interior car ends made it rather difficult to change the front route and destination signs. The distinctive "EXP" (express) and "LOCAL" marker lights were also removed.

After refurbishment, the R32 and R32A cars were renamed R32 Phase I, R32 Phase II, and R32 GE, with the first of the three types being the only one in service today. The R32 Phase I cars (re-built by Morrison Knudsen) have WABCO Air Brake packages, GE Master Controllers, and Thermo King HVAC units. The R32 Phase II cars (also re-built by Morrison Knudsen) have NY Air Brake equipment, Westinghouse Master Controllers, and Stone Safety HVAC units. The ten R32 GEs are slightly different from the Phase I and II cars as they were rebuilt to R38 specifications (experimental Sigma HVAC Units powered by A/C motors and solid state inverters, original traction motors rebuilt to 115 horsepower instead of the traditional 100 horsepower units, backlit ad signs, and different bulkhead designs). Since the cars were sent out to be overhauled based on how poorly they were performing (worst first), there are R32s and R32As rebuilt in both Phase I and Phase II configurations. There are also about a dozen or more pairs which are composed of R32 and R32A mixes.

Retirement
Initial Plans
The R160s replaced most of the R32s in the late 2000s. The ten GE cars were retired first in the summer of 2007. The Phase II R32s followed a year later, from the summer of 2008 until October 13, 2008. Finally, a handful of Phase I R32s were retired from early 2009 until November 2009, when it was decided to retire the NYCT R44s instead due to structural problems found on those cars. All together, 368 cars were retired by October 2010, and only 232 cars remained.

After retirement, most cars were stripped and sunk as artificial reefs. However, after the reefing program ended in April 2010, retired R32s have been trucked to Sims Metal Management's Newark facility to be scrapped and processed, an action that occurred between April 2013 and October 2013 with several already-retired cars and is expected to occur with the remaining active cars when they retire.

Some retired R32 cars were saved for various purposes throughout the New York City Subway system, including:

Phase II pair 3350–3351, set aside for preservation by the Railway Preservation Corp. This pair is currently stored at the Coney Island Yard.
Phase II pair 3352–3353, also set aside for preservation, but by the New York Transit Museum. This pair was the lead pair on the R32s' premiere trip on September 9, 1964. The pair is currently stored at the 207th St Yard.
GE-rebuilt pair 3594–3595, being used as NYPD training cars at Floyd Bennett Field.
Phase I pair 3786–3787, being used as derailment re-railing training cars at the Coney Island Complex.

Prolonged Service
222 of the 232 remaining R32s have been undergoing intermittent SMS (Scheduled Maintenance Service, a life extension program) cycles since 2011 at a cost of $25 million to extend their useful lives through at least 2017. The active cars are maintained at the 207th Street Yard and East New York Yards, running on the C, J, and Z, with two sets assigned to the A.

The other ten cars were taken out of revenue service in December 2010. They are now used for work service; six of these cars are based out of the 36th-38th Street Yard, while the other four are based out of the 207th Street Yard. All cars handle such tasks as providing traction for B Division rail adhesion cars and refuse trains. A number "1" sticker was placed before the former number (for example, car 3510 became 13510) of the four cars based from the 207th Street Yard.

The active R32 cars were planned to be replaced by the R179s beginning in 2017. However, the MTA is considering retaining most, if not all cars due to delays in the delivery of the R179 replacement cars, along with a previously unanticipated fleet expansion necessitated by the renovation of the 14th Street Tunnel and the opening of the Second Avenue Subway. As a result, the MTA is expecting to spend another $49.2 million to refurbish and maintain the remaining R32s until the delivery of the R211As.

At 53 years (the longest for an R-type car), the R32s are the oldest New York City Subway cars in regular passenger service, well past the specified service life of 35 years, as well as some of the oldest rolling stock of any metro system anywhere in the world. According to railfan James Greller, they often cited for their superior durability and craftsmanship, along with the structural reinforcement done to their bodies during the GOH period; four other B Division models built after them have been mostly or completely retired. They are also the only cars currently in service that were built for the New York City Transit Authority prior to its merger with the Metropolitan Transportation Authority in 1968.

Despite their considerable structural quality, the R32s have been suffering from low mechanical quality in recent years. The R32s have the lowest Mean Distance Between Failures figures of the active fleet, as the overhauls they received during the 1988–89 period have all worn out after 28–29 years. Others have criticized the R32s for their appearance and lack of comfort; in August 2011, The New York Timescalled the R32s "a dreary reminder to passengers of an earlier subterranean era," and claimed that "time has taken a toll" on the cars. They have worn-out air conditioning systems, so most of the cars were transferred to services with mostly outdoor or elevated portions, namely the A, J, and Z services. The R32 fleet has become a poster child for the deterioration of the subway system.

An R32 train on the J at Marcy Avenue. 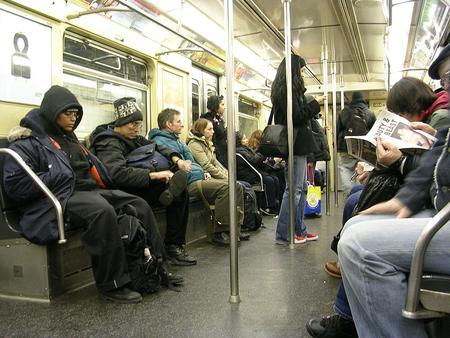 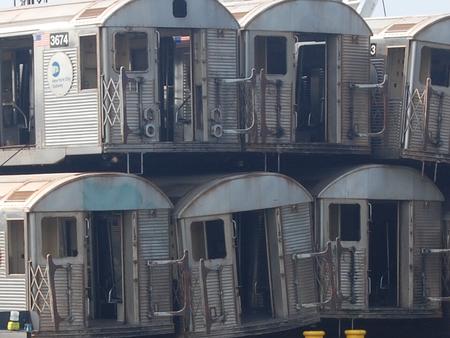 Retired R32 cars being shipped out to the Atlantic Ocean for reefing.

By StanTheCaddy from Amsterdam, Netherlands - Subway for reefs, CC BY 2.0, https://commons.wikimedia.org/w/index.php?curid=33694469 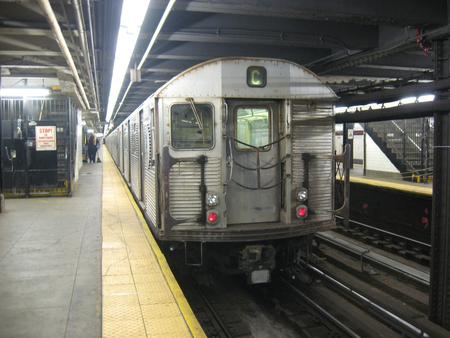 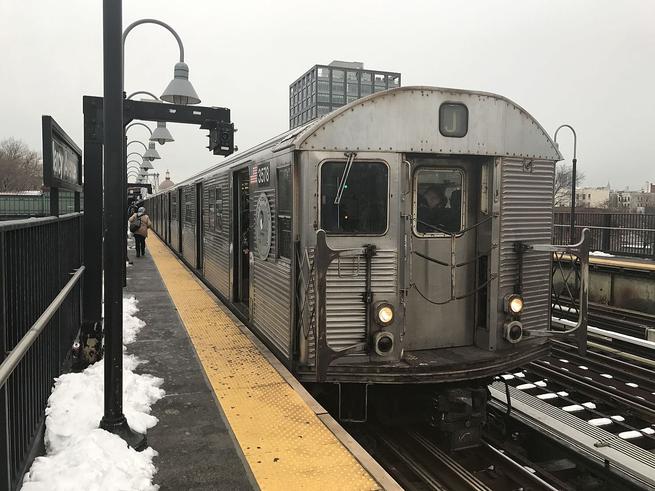