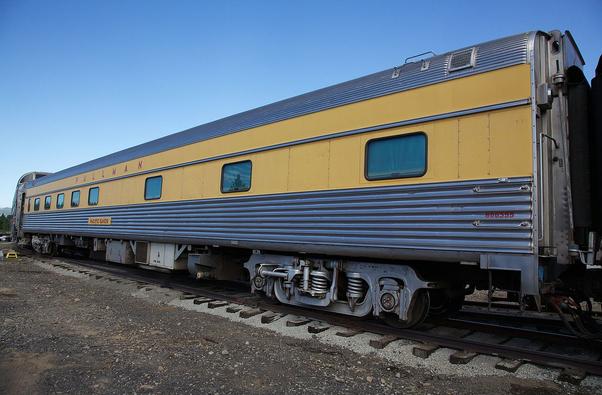 Pacific Series Sleeper
The Pacific series was a fleet of fifty lightweight streamlined sleeping cars built by the Budd Company for the Union Pacific Railroad in 1949–1950. Each car contained ten roomettes and six double bedrooms. Union Pacific sold several to the Chicago, Milwaukee, St. Paul and Pacific Railroad (the "Milwaukee Road") in the late 1960s; Amtrak purchased most of the fleet in the early 1970s. Several remain in use as business cars.

Design
After World War II the 10-roomette 6-double bedroom (colloquially the "10-6 sleeper") design proved popular in the United States, with 682 such cars manufactured. All fifty Pacific series cars were built on Budd lot number 9660.039, and allocated Pullman Plan 9522. In this design the ten roomettes were numbered 1-10 and split down the middle by a hallway, while all six double bedrooms (designated A-F) were off to one side. A bathroom and porter's room were located across from each other at the vestibule end of the car. The car sides were corrugated instead of smooth, which was uncommon for Union Pacific equipment.

Between 1971–1974 Amtrak purchased 43 of the Pacific series cars from the Union Pacific. Most were retired from service in the mid-1980s; several Amtrak rebuilt as crew dormitory cars and those remained in service into the 2000s. One, Pacific Cape, remains in use as a business car. The Union Pacific retained Pacific Domain, renamed Cabarton, as a staff car.