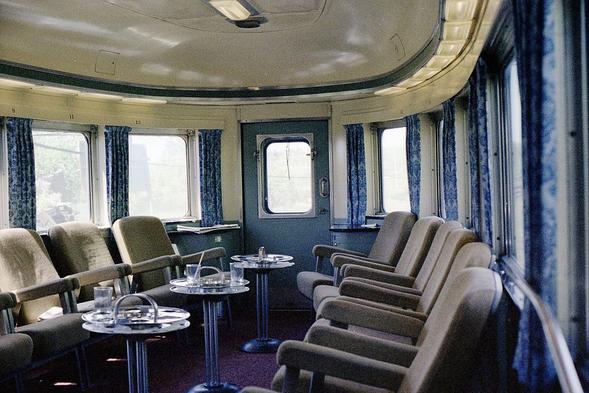 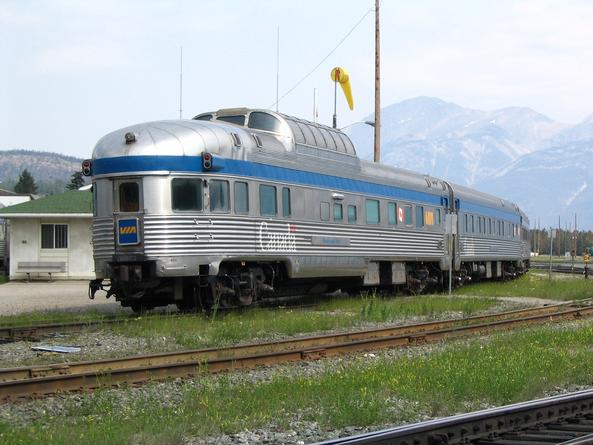 Revelstoke Park on the rear of the Canadian in 2004.

Interior of Algonquin Park on the Canadian Pacific Trans Continental train in 1978.

Park Series
The Park series or Park car is a fleet of lightweight streamlined dome-sleeper-observation cars built by the Budd Company for the Canadian Pacific Railway in 1954. Each of the 18 cars was named for a Canadian national or provincial park. Via Rail acquired the fleet from Canadian Pacific in 1978 and the cars remain in active service.

Design
The cars were constructed of stainless steel; save for a Tuscan red letterboard bearing the name "Canadian Pacific" they were unpainted. Each car was named for a Canadian national or provincial park but did not carry numbers. The interiors were largely plastic, including the handrails up to the dome area. Inside at the front of the car were four private rooms: three double bedrooms and one drawing room. A single hallway led to the "Mural lounge." As built in 1954, each lounge had a specially-commissioned 4 by 20 ft (1.2 by 6.1 m) mural depicting the car's namesake. Each car also included a 3 by 5 ft (0.91 by 1.52 m) map of the park. At the rear of the car was the observation lounge, with seating for thirteen. Stairs led up to the dome, with seating for 24. At the time of their construction in 1954 the listed capacity throughout the car was 54 persons. Via removed the murals in 1986. During a rebuild in the 1990s a panel of clocks was added to the observation lounge showing the different time zones in Canada.

Operation
Budd delivered 18 Park cars for the Canadian Pacific in 1954 as part of a massive 173-car order which equipped the new transcontinental Canadian and re-equipped the Dominion. The first car to enter service was the Banff Park (named for Banff National Park). Fundy Park (Fundy National Park) was wrecked in a collision at Gull Lake, Saskatchewan, in 1957. Via Rail acquired the remaining 17 Park cars from Canadian Pacific in 1978. As of 2015 14 remain on the roster. They are always assigned to the Canadian and the Jasper – Prince Rupert train, and can also be found on the Ocean and the Winnipeg – Churchill train.

Preserved
Several Park cars are no longer in regular revenue service:
Algonquin Park is at the Tennessee Valley Railroad Museum in Chattanooga, Tennessee.
Sibley Park is at the Canadian Railway Museum in Saint-Constant, Quebec.
Riding Mountain Park was originally sold to a private owner in 2005. As of 2015, the car was for sale.