Via Rail's Canadian at Jasper in 2012. In the foreground is one of Via's "Panorama Domes," manufactured by Colorado Railcar.

Single-Level Dome Passenger Car
The Single-Level Dome, also known as the Panorama Dome, is a type of dome coach manufactured by Colorado Railcar for various operators between 1997–2007. They are similar in concept to the company's bilevel Ultra Domes.

Design
Each window on the Single-Level Dome is 6 feet by 7 feet 8 inches; Colorado Railcar claimed they were the "world's largest glass domed windows." In a lounge configuration the cars can seat up to 76 at "four tops" (tables with 2 × 2 seating). Via Rail's three cars can seat 71–74 in a standard coach configuration. The interior color scheme for the Florida cars was "aquas, pinks and light green." The windows begin at "thigh level" and curve at the top, constituting "most of the ceiling." The Peninsula Clarion described the view as "panoramic".

Operation
The first five cars were built for the Florida Fun Train, a short-lived service between South Florida and Orlando, Florida. These included four coaches and a lounge car with an open platform. The Florida Fun Train folded in September 1998. The Alaska Railroad acquired all five cars at bankruptcy in 1999. One of these cars was rebuilt as a business car, the Aurora. BC Rail acquired three more of the domes (intended for Florida) in 2000. After BC Rail ceased passenger operations in 2002 they were acquired by Via Rail. Dubbed "Panorama Domes", they remain in service. The Alaska Railroad purchased an additional three cars in 2006–2007, bringing their total to eight. 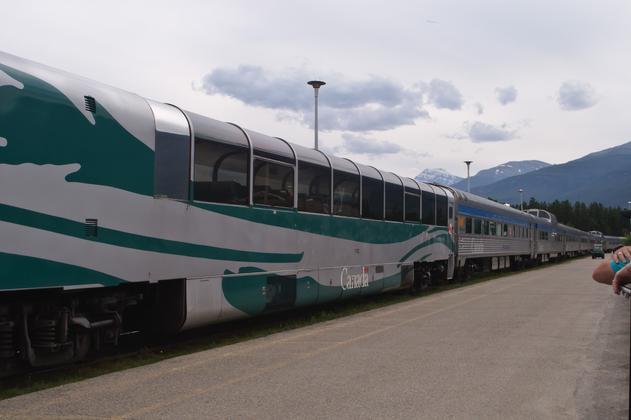