Sleeping Car
The sleeping car or sleeper is a railway passenger car that can accommodate all its passengers in beds of one kind or another, primarily for the purpose of making nighttime travel more restful. Theodore Tuttle Woodruff was the American inventor of the sleeper car.

The first such cars saw sporadic use on American railroads in the 1830s; they could be configured for coach seating during the day. Some of the more luxurious types have private rooms (fully and solidly enclosed rooms that are not shared with strangers).

History
The Cumberland Valley Railroad pioneered sleeping car service in the spring of 1839, with a car named "Chambersburg", between Chambersburg and Harrisburg, Pennsylvania. A couple of years later a second car, the "Carlisle", was introduced into service.

The man who ultimately made the sleeping car business profitable in the United States was George Pullman, who began by building a luxurious sleeping car (named Pioneer) in 1865. The Pullman Company, founded as the Pullman Palace Car Company in 1867, owned and operated most sleeping cars in the United States until the mid-20th century, attaching them to passenger trains run by the various railroads; there were also some sleeping cars that were operated by Pullman but owned by the railroad running a given train. During the peak years of American passenger railroading, several all-Pullman trains existed, including the 20th Century Limited on the New York Central Railroad, the Broadway Limited on the Pennsylvania Railroad, the Panama Limited on the Illinois Central Railroad, and the Super Chief on the Atchison, Topeka and Santa Fe Railway.

Pullman cars were normally a dark "Pullman green", although some were painted in the host railroad's colors. The cars carried individual names, but usually did not carry visible numbers. In the 1920s, the Pullman Company went through a series of restructuring steps, which in the end resulted in a parent company, Pullman Incorporated, controlling the Pullman Company (which owned and operated sleeping cars) and the Pullman-Standard Car Manufacturing Company. Due to an antitrust verdict in 1947, a consortium of railroads bought the Pullman Company from Pullman Incorporated, and subsequently railroads owned and operated Pullman-made sleeping cars themselves. Pullman-Standard continued manufacturing sleeping cars and other passenger and freight railroad cars until 1980.

Cultural impact of Pullman Porters
One unanticipated consequence of the rise of Pullman cars in the US in the 19th and early 20th centuries was their effect on civil rights and African-Americanculture. Each Pullman car was staffed by a uniformed porter. The majority of Pullman Porters were African Americans. While still a menial job in many respects, Pullman offered better pay and security than most jobs open to African Americans at the time, in addition to a chance for travel, and it was a well regarded job in the African-American community of the time. The pullman attendants, regardless of their true name, were traditionally referred to as "George" by the travelers, the name of the company's founder, George Pullman. The Pullman company was the largest employer of African Americans in the United States. Subsequently, railway porters fought for political recognition and were eventually unionized. Their union, the Brotherhood of Sleeping Car Porters, became an important source of strength for the burgeoning Civil Rights Movement in the early 20th century, notably under the leadership of A. Philip Randolph. Because they moved about the country, Pullman porters also became an important means of communication for news and cultural information of all kinds. The African-American newspaper, the Chicago Defender, gained a national circulation in this way.[citation needed] Porters also used to re-sell phonograph records bought in the great metropolitan centres, greatly adding to the distribution of jazz and blues and the popularity of the artists.

Open-Section Accommodation
From the 19th to the mid-20th century, the most common type of sleeping car accommodation on North American trains was the "open section". Open-section accommodations consist of pairs of seats, one seat facing forward and the other backward, situated on either side of a center aisle. The seat pairs can be converted into the combination of an upper and a lower "berth", each berth consisting of a bed screened from the aisle by a curtain. A famous example of open sections can be seen in the movie Some Like It Hot (1959).

Private Accommodations
As the 20th century progressed, an increasing variety of private rooms was offered. Most of these rooms provided significantly more space than open-section accommodations could offer. Some of them, such as the rooms of the  "Slumbercoach" cars manufactured by the Budd Company and first put into service in 1956, were triumphs of miniaturization.

Roomettes
A Roomette, in the historically correct sense of the word, is a private room for a single passenger, containing a single seat, a folding bed, a toilet (not in a private cubicle of its own), and a washbasin. When a traditional Roomette is in night mode, the bed blocks access to the toilet. Like open sections, Roomettes are placed on both sides of the car, with a corridor down the center. Duplex Roomettes are staggered vertically, with every second accommodation raised a few feet above the car's floor level, in order to make slightly more efficient use of the space. Single-passenger Slumbercoach accommodations are a particularly Spartan form of Roomette.

Compartments and Double Bedrooms
Compartments and Double Bedrooms are private rooms for two passengers, with upper and lower berths, washbasins, and private toilets, placed on one side of the car, with the corridor running down the other side (thus allowing the accommodation to be slightly over two thirds the width of the car). Frequently, these accommodations have movable partitions allowing adjacent accommodations to be combined into a suite.

Drawing Rooms and Larger Accommodations
A Drawing Room is a relatively rare accommodation for three people traveling together, again with a washbasin and private toilet, again on one side of the car. Even rarer are larger rooms accommodating four or more; generally the needs of large parties were better served with multiple rooms, with or without the ability to combine them into a suite.

Modern Amtrak Accommodations
Amtrak's Superliner Economy Bedrooms (now called Superliner Roomettes, although they are structurally closer to open sections) accommodate two passengers in facing seats that fold out into a lower berth, with an upper berth that folds down from above, a small closet, and no in-room washbasin or toilet, on both sides of both the upper and lower levels of the car. Effectively, they are open sections with walls, a door, and a built-in access ladder for the upper berth (which doubles as a nightstand for the lower berth passenger). Superliner Deluxe Bedrooms are essentially the same as historic Compartments and Double Bedrooms, with the toilet cubicle doubling as a private shower cubicle. In addition, each Superliner sleeping car has two special lower-level accommodations, each taking up the full width of the car: the Accessible Bedroom, at the restroom/shower end of the car (below the Deluxe Bedrooms), is a fully wheelchair-accessible accommodation for two, with a roll-in cubicle for the toilet and shower; the Family Bedroom, at the Economy Bedroom end of the car, accommodates two adults and up to three small children, without private toilet or shower facilities.

When the Viewliner sleeping cars were built, the accommodations were patterned after the Superliner accommodations, except that the Economy Bedrooms (or "Viewliner Roomettes") include Roomette-style washbasins and toilets, as well as windows for the upper berths.

North America
Canada
In Canada, all regularly scheduled sleeping car services are operated by Via Rail, using a mixture of relatively new cars and refurbished mid-century ones; the latter cars include both private rooms and "open section" accommodations.

USA
In the United States, all regularly scheduled sleeping car services are operated by Amtrak. Amtrak offers sleeping cars on most of its overnight trains, using modern cars of the private-room type exclusively.

Today, Amtrak operates two main types of sleeping car: the bi-level Superliner sleeping cars, built from the late 1970s to the mid-1990s, and the single-level Viewliner sleeping cars, built in the mid-1990s. In the most common Superliner sleeping car configuration, the upper level is divided into two halves, one half containing "Bedrooms" (formerly "Deluxe Bedrooms") for one, two, or three travelers, each Bedroom containing an enclosed toilet-and-shower facility; and the other half containing "Roomettes" (formerly "Economy Bedrooms" or "Standard Bedrooms") for one or two travelers; plus a beverage area and a toilet. The lower level contains more Roomettes; a Family Bedroom for as many as two adults and two children; and an "Accessible Bedroom" (formerly "Special Bedroom") for a wheelchair-using traveler and a companion; plus toilets and a shower.

The Viewliner cars contain an Accessible Bedroom (formerly "Special Bedroom") for a wheelchair-using traveler and a companion, with an enclosed toilet-and-shower facility; two Bedrooms (formerly "Deluxe Bedrooms") for one, two, or three travelers, each Bedroom containing an enclosed toilet-and-shower facility; "Roomettes" (formerly "Economy Bedrooms", "Standard Bedrooms", or "Compartments") for one or two travelers, each Roomette containing its own unenclosed toilet and washing facilities; and a shower room at the end of the car. 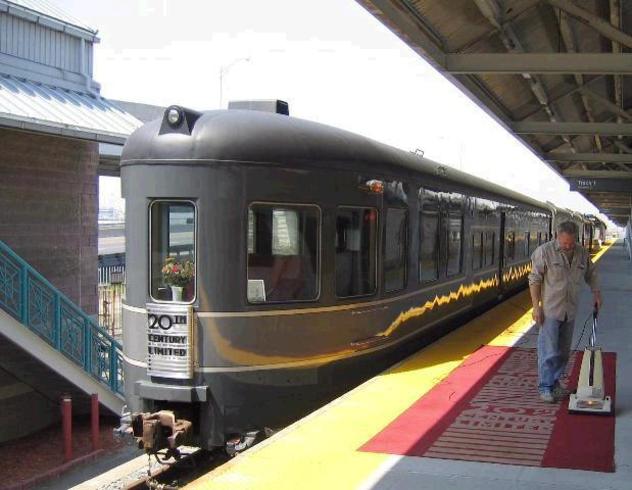 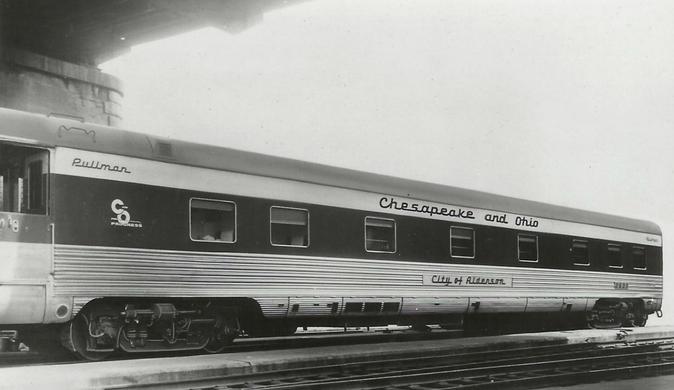 An illustration of the Pullman Company's single occupancy sleeping compartment, the Roomette, in night mode, 1936.

The "Hickory Creek" is a sleeper-buffet-observation car. It was built by Pullman-Standard in 1948 for the 20th Century Limited and is now privately owned. As built it had five double bedrooms.  By Simon Pielow (Flickr: Private Rail Car - Hickory Creek) [CC BY-SA 2.0 (https://creativecommons.org/licenses/by-sa/2.0)], via Wikimedia Commons 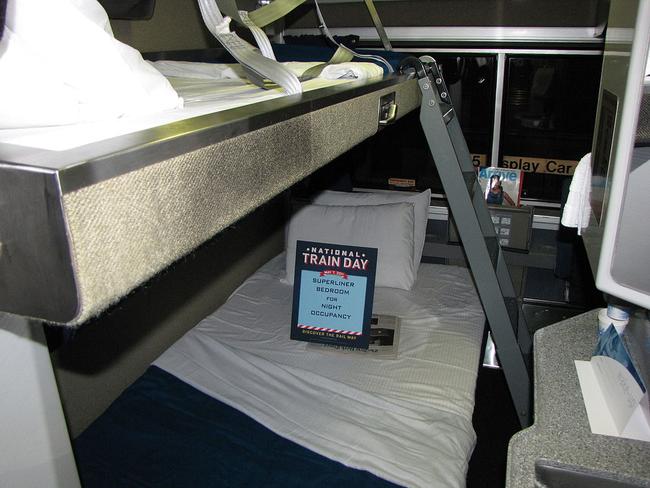 Viewliner Sleeping Car No. 62019 passes through Yawkey station in Boston on the westbound Boston-Albany leg of the Lake Shore Limited. 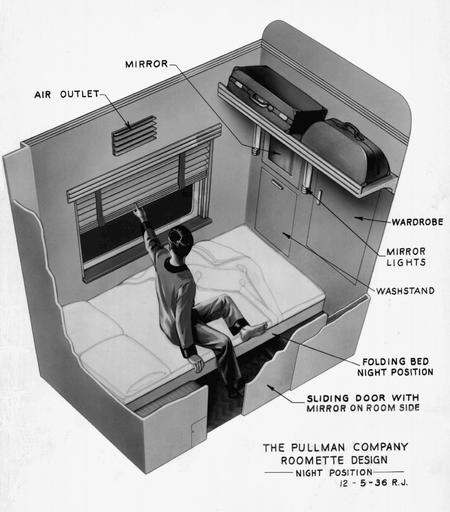 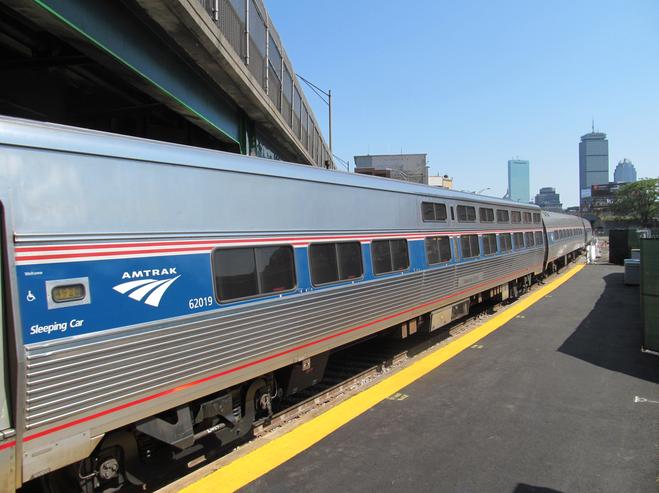 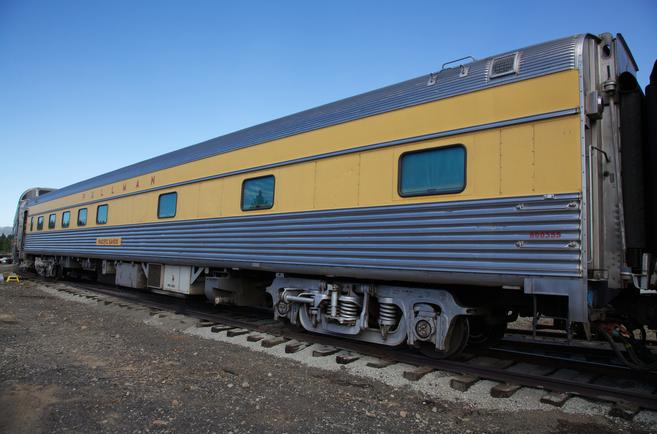 Postcard photo of a Pullman-built Chesepeake and Ohio sleeping car City of Alderson. Pullman-Standard built No. 2618 City of Alderson in 1950 for the C&O, part of an order of 56 cars. As built it contained 10 roomettes and 6 double bedrooms.