A Train of Tomorrow publicity photo.

The GM Train of Tomorrow

The Train of Tomorrow was an ultra-modern four car demonstration train designed by General Motors for publicity purposes to compliment their EMD E7 diesel locomotive. The train toured the country extensively for over two years and racked-up 65,000 miles before it was sold to the Union Pacific.

In 1944, General Motors began to look for an unusual way to promote their new 2,000 hp EMD E7 diesel locomotive. With input from railway professionals, transportation experts and General Motors own stylists, the Astra Liner was conceived. This moniker was quickly dropped in favor of the Astra-Dome name. GM offered the dome car design to all builders, completely free of any royalties or licensing fees. The CB&Q liked what they saw and quickly converted an existing car into a dome car, the Silver Dome. The Silver Dome was the first dome car on the rails and was an immediate success.

GM however, was not interested constructing passenger railcars themselves, having already a successful locomotive business. In 1945 they collaborated with Pullman-Standard and an order was placed with P-S for four cars, all of which were designed to be the most modern railroad equipment available. Each car was a dome car;  a dome coach, a dome diner, a dome sleeper, and a dome lounge. The cars were painted in a unique bluish-green livery with stainless steel fluting, and an E7 locomotive was decorated to match. The set was completed in May of 1947 and GM named it the Train of Tomorrow. The Train of Tomorrow soon embarked on a 29-month tour across the United States and Canada.

The Train of Tomorrow Equipment Roster

The Pullman-built Astra-Dome coach Star Dust was 85 ft in length and weighed 147,000 lbs. The car had 16 seats in front of the dome, 12 seats and two washrooms behind the dome, and three separate compartments underneath the dome with 20 seats, for a total of 58 revenue seats. Including the Astra Dome, the Star Dust's entire seating capacity was 72. Union Pacific acquired the Star Dust in March of 1950, retiring the car after 14 years of service in November of 1964. Sadly, the Star Dust was then to meet the scrapper's torch.

Dome Diner Sky View was an 85' Astra-Dome built by Pullman-Standard. The dining car had a weight of 160,000 lbs and a seating capacity of 52, including 18 in the Astra-Dome and 10 in the private dining room. The total refrigeration room in the car was 111 cu ft. The kitchen had an incredible ice-making capacity of 225 lbs of ice in 24 hrs. The Sky View went to Union Pacific in March of 1950. It was retired in February of 1961 and was finally scrapped in 1964.

Dome Sleeper Dream Cloud was an 85' Astra-Dome and the only dome sleeper Pullman-Standard ever built. The car weighed 150,000 lbs and was configured as a 3-2-8 sleeper. Passenger capacity was 24 sitting and 20 sleeping, not including the 24 seats in the Astra-Dome. The Dream Cloud was designed with two three-berth drawing rooms, eight duplex roomettes for single occupancy, and, under the dome, 3 compartments, each with 2 lengthwise lower berths. Union Pacific bought the Dream Cloud in March of 1950. UP retired the car in February of 1964, scrapping it in 1964.

Pullman-Standard built the Dome Observation Lounge Moon Glow. The 85' Astra-Dome observation weighed 141,000 lbs and had a seating capacity of 68. The car featured a rear main lounge, a cocktail lounge, a lower bar and an Astra Dome. The car was sold to Union Pacific in April of 1956, and was converted for use mid-train in 1959. The Moon Glow was retired in November of 1964 and went to a scrapyard in Pocatello, Idaho in 1965. The Golden Spike Chapter of the Railway and Locomotive Historical Society then acquired the car for eventual display in Ogden, Utah. This is the only Train of Tomorrow car to survive, and at last report the car was terribly deteriorated.

GM Train of Tomorrow Locomotive No. 765

The Train of Tomorrow's support car was the Baggage Dorm Blue Goose. An old-school heavyweight car, the Blue Goose was meant to run ahead of the Train of Tomorrow. It was used to carry ramps and other expendable supplies such as brochures, which were needed at every display stop. It was run as part of the train directly behind Locomotive No. 765 on rare occasions. The Blue Goose was former Pullman combine National Road and was built in 1925 to plan 3951 in lot 4885 by Pullman-Standard as a club-buffet-baggage. The car was then modified to plan 3951L in May of 1931. It served the Baltimore and Ohio on passenger trains for several years, but by 1944 it was being used as a paint shop-upholstery shop and foreman's office at the B&O yards in Chicago. Acquired by GM for the Train of Tomorrow in May of 1947, the car's seating area was removed to create dormitory space for the Pullman porters traveling with the train. The car's livery was  blue-green like the other cars on the train. The disposition of this car is unknown. 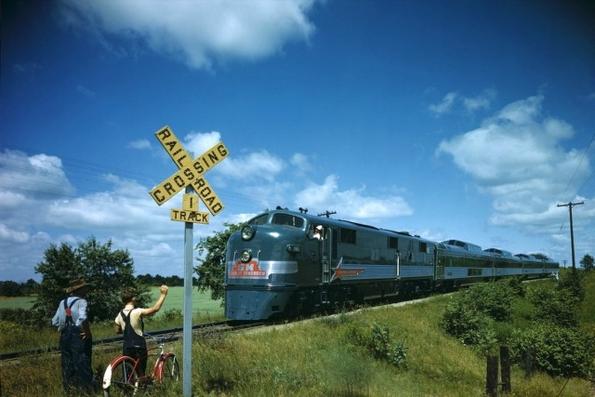 A Train of Tomorrow Slideshow.