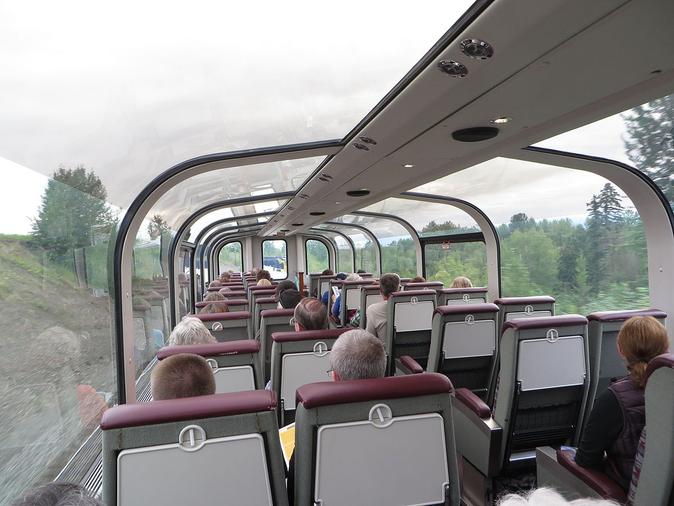 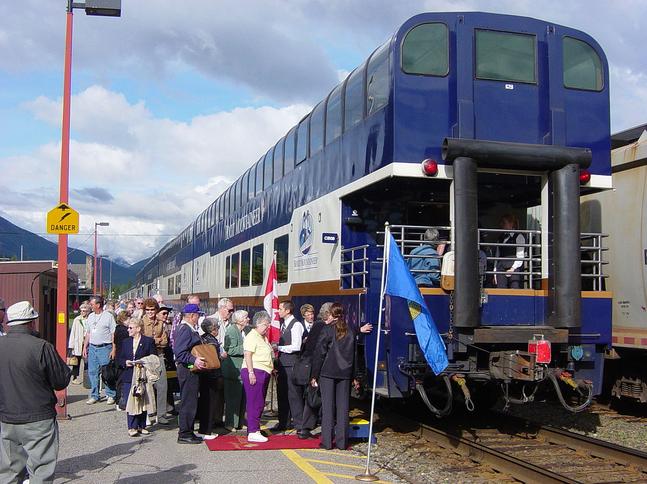 Ultra Dome Bi-level Passenger Car
The Ultra Dome is a bi-level dome coach manufactured by Colorado Railcar for various operators between 1988–2007. Colorado Railcar, and its predecessor Rader Railcar, constructed a total of 44 cars. All 44 were purchased by touring companies in Alaska and Canada. At the time of their construction their dome areas featured the largest individual glass panes ever installed in a railcar.

Background
The Ultra Domes were the brainchild of Thomas G. Rader, an American railway entrepreneur. Rader worked for the Holland America Line in Alaska and developed an idea to use trains in conjunction with the cruise lines to promote tourism in the state. In 1982, Rader acquired five former Chicago, Milwaukee, St. Paul and Pacific Railroad ("Milwaukee Road") Super Domes, originally built by Pullman-Standard in 1952. Four were rebuilt by American Car and Foundry (ACF) and placed into service in 1983 as the Midnight Sun Express. Passengers from Cunard Line cruise ships boarded the cars (attached to an existing Alaska Railroad train) in Anchorage, Alaska and hauled to Denali National Park. On-board services were maintained to a high level, similar to that of a cruise ship. The service expanded in 1984 to include Princess Cruises and Rader's old employer the Holland America Line. Rader sold out to Princess Cruises in 1986 but recognized there was a substantial growth opportunity. Using the proceeds from the sale, he founded Rader Railcar to produce new dome cars for service in Alaska and elsewhere.

Design
The Ultra Domes vary in specifics depending on the operator. Common features include 6 by 6 feet windows. The total square footage between the two levels is 3,080 square feet, 40-60% greater than a single-level car. The maximum passenger capacity on the upper level is 88. In 2001 the starting price for an Ultra Dome was $2.5 million. Eight of the Princess cars were equipped with kitchens, and all ten had dining areas with seating for 32. The windows in the dining area are 5 feet tall. The glass panes in the dome area were, at the time of their installation, the largest individual panes ever installed in a railcar.

Operation
All 44 Ultra Domes were acquired by tourist operations in Alaska and Canada. Princess Tours acquired ten Ultra Domes between 1988–1999 at a cost of $14.3 million. The cars were refurbished in 2005. Holland America, which had acquired many of the former Super Domes, purchased ten Ultra Domes itself between 2003–2005. In 2001 Celebrity Cruises and Royal Caribbean created a joint venture named Royal Celebrity to operate the Wilderness Express and purchased four Ultra Domes. The Alaska Railroad, which hauled the trains, bought four of its own between 2005–2007. The Canadian tourist operator Rocky Mountaineer is the single largest operator, with sixteen Ultra Domes.

The interior of an Ultra Dome on the Alaska Railroad, circa 2014.

A Rocky Mountaineer Ultra Dome at Banff in 2005.

By The original uploader was Leonard G. at English Wikipedia - Transferred from en.wikipedia to Commons by IngerAlHaosului using CommonsHelper., CC SA 1.0, https://commons.wikimedia.org/w/index.php?curid=9015538