The Atlantic & Danville Railway
The Atlantic & Danville Railway (reporting mark AD) was a former Class I railroad that operated between Portsmouth and Danville, Virginia, and a section in North Carolina. In March 1982 it was merged with the Norfolk Southern Railway and became largely redundant. The eastern segment between Lawrenceville and Suffolk and terminal trackage in Portsmouth and Danville remain; however, on November 26, 2013, Norfolk Southern filed to discontinue service between Lawrenceville and Franklin.

History
The Atlantic & Danville Railway (A&D) was chartered in 1882. Its line from Portsmouth to Danville, Virginia, was completed and opened in 1890. Short branches from main line led to West Norfolk, Hitchcock Mills, and Buffalo Lithia Springs, Virginia, and a 50-mile narrow gauge line ran from Emporia, at a junction with the Atlantic Coast Line Railroad (ACL), northeast to Claremont on the James River. 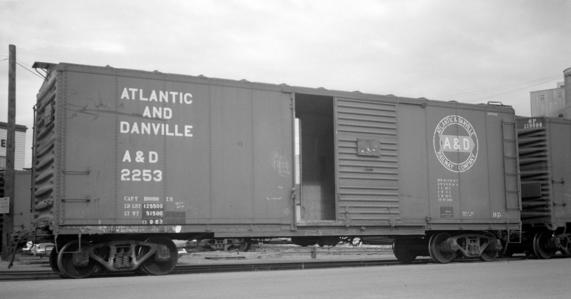 In 1899 the Southern Railway (SOU) leased the A&D for 50 years. The A&D provided a good connection from SOU's Washington-Atlanta main line at Danville to the port area of Norfolk and Portsmouth. The narrow gauge branch was abandoned in 1934, and the Hitchcock Mills and Buffalo Lithia Springs branches were dismantled in the early 1940s, but the main line and the West Norfolk branch remained intact. When the lease expired in 1949, SOU weighed the cost of operating the A&D and the limitations of its track, most 60- and 85-pound rail, against the cost of trackage rights over ACL from Selma, North Carolina, to Norfolk. SOU did not renew the lease.

A&D resumed operation on its own August 1, 1949. A&D filed for bankruptcy on January 19, 1960, after the Interstate Commerce Commission denied its request to guarantee a loan for capital expenditures and the purchase of freight cars.

On October 31, 1962, the railroad was purchased at auction by the Norfolk & Western Railway (N&W), which organized the Norfolk, Franklin & Danville Railway (NF&D), a wholly owned subsidiary, to operate the line. The merger of N&W and SOU rendered the Norfolk-Danville route redundant. The western third of the NF&D was abandoned, and the remainder was absorbed by N&W on December 30, 1983. Much of this segment has been acquired for reuse as the Tobacco Heritage Trail.