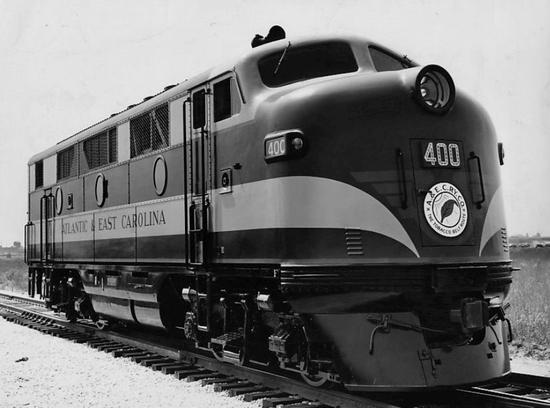 A new EMD F2 locomotive acquired by the Atlantic and East Carolina Railway, circa July 23, 1946.

The lease was forfeited in 1934 for nonpayment of rent and the A&NC began operating on its own in November 1935. On April 20, 1939, the stockholders voted to lease the railroad to H. P. Edwards, who organized the Atlantic & East Carolina Railway (A&EC) to operate the railroad. Within two years the A&EC was making a profit. The railroad dieselized in 1946 with two Electric-Motive (EMD) F2s, an SW1, and a General Electric 44-ton switcher.

In February 1957 the Interstate Commerce Commission authorized the Southern Railway to purchase all the capital stock of the A&EC. By January 1958 the A&EC was listed under the Southern and currently exists as a subsidiary of the Southern.

The Morehead & South Fork Railroad, an independent short line, is essentially an extension of the A&EC from Morehead City to Beaufort, North Carolina.