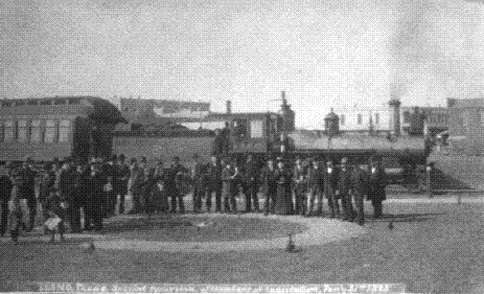 An Austin and Northwestern Railroad Special Train at Llano, Texas.

Austin and Northwestern Railroad
The Austin and Northwestern Railroad began construction on a rail line west of Austin, Texas, USA, toward Llano on April 20, 1881. The railroad was originally built as a 3 ft (914 mm) narrow gauge line with plans to connect to the Texas and Pacific Railway at Abilene. Construction reached Burnet, Texas, by 1882 and the line was later extended to Granite Mountain by 1885 - when the railroad was contracted to haul pink granite for the new Texas State Capitol building in Austin. The railroad then used the slogan "The Granite and Iron Route". The company later extended its line 2.3 miles (3.7 km) to Marble Falls by using the charter of the Granite Mountain and Marble Falls City Railroad. Due to a bend in the tracks, trains would occasionally derail, accidentally dumping some of the pink granite. The rocks which remain are a local point of interest.

The line was converted to 4 ft 8 1⁄2 in (1,435 mm) standard gauge and by 1892 the railroad was extended to Llano. In 1901 the Texas legislature approved the merger of the Austin and Northwestern and the Houston and Texas Central Railroad. As a condition of the merger, a new passenger terminal was constructed at Austin, and the line was extended from Burnet to Lampasas in 1903. The Texas and New Orleans Railroad absorbed the line in 1934 and it was later absorbed into the Southern Pacific Company.

In 1986, Southern Pacific elected to abandon the entire 163-mile (262 km) Giddings to Llano line. The City of Austin and Capital Metro purchased the railroad for $9.3 million, with the intent of using the right-of-way as a mass transit corridor. As of 2008 the railroad is owned by Capital Metro (Austin's transit authority) and freight service is currently operated by the Austin Western Railroad.