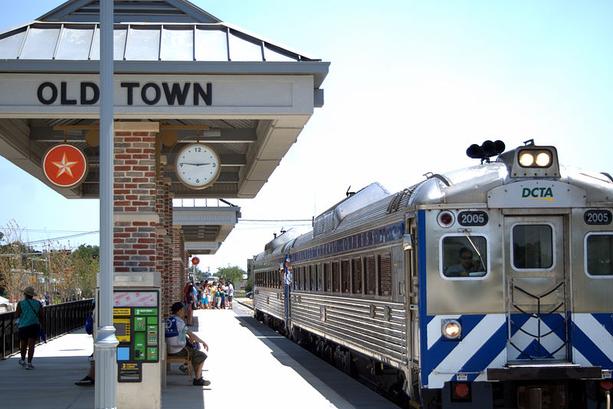 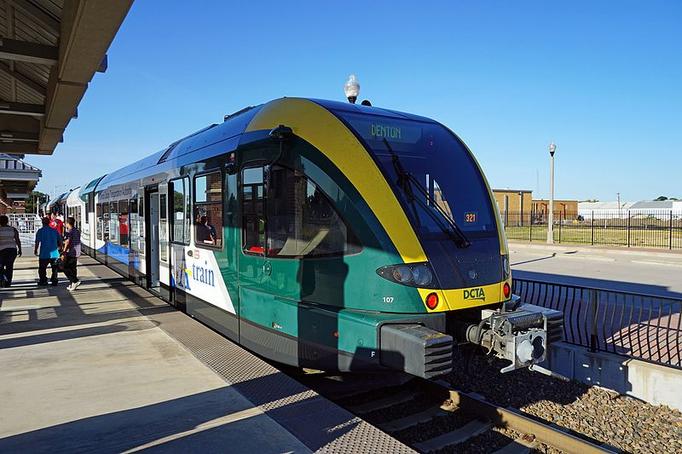 Another view of the DCTA A-train at Downtown Denton Transit Center in Denton, Texas. 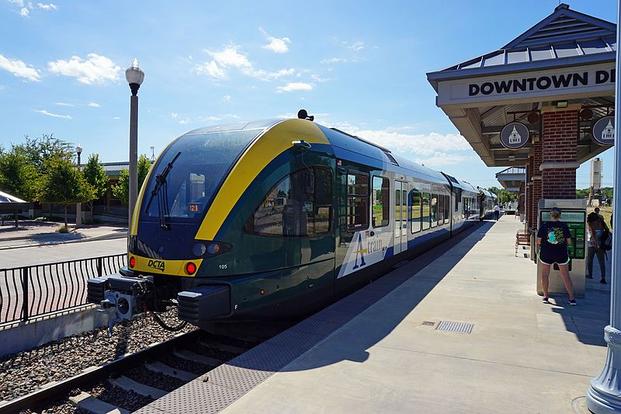 A-train
The A-train is a 21-mile (34 km) commuter rail line in Denton County, Texas that parallels Interstate 35E between Denton and Carrollton and acts as an extension with the Dallas Area Rapid Transit Green Line at Trinity Mills Station in Carrollton. It is operated by the Denton County Transportation Authority (DCTA) and serves Denton County. It opened on June 20, 2011.

History
A formal Alternatives Analysis study conducted in 2004–2005, which included extensive community and citizen involvement, identified the proposed rail line as the best and most cost-effective mobility solution for Denton County and the region. It cited the impacts of projected population growth, growing safety, traffic congestion and air quality concerns, as well as the need to improve access to Denton County’s vital health care facilities and three major college and university campuses.

In May 2005, the DCTA Board of Directors approved the study’s recommendation to construct the rail alignment on east side of I-35E using an existing railroad corridor. The DCTA worked closely with the Federal Transit Administration (FTA) to meet the Federal and local regulatory requirements. In March 2008, the DCTA Board of Directors approved the Final Environmental Impact Determination that detailed the proposed measures to mitigate the environmental impacts of the rail project and the Regional Transportation Council approved funding of in August 2008.[citation needed] Federal funds were not used in the construction of the rail link.

On April 4, 2011, the DCTA began tests of railcars, communications systems and signals on track between Carrollton and Lewisville Lake, with tests on the remainder of the route projected to begin later in the month,[4] though this date was later pushed back to mid-May.

The A-train was opened on June 20, 2011 with celebrations at five train stations.

Future
The North Central Texas Council of Governments Mobility 2045 plan calls for the A-train to be extended south to interchange with the Cotton Belt Rail Line.

Ridership
Figures collected by the American Public Transportation Association show that 1,500 people rode the A-train on an average weekday in the third quarter of 2011.[9] As of the fourth quarter of 2015, average weekday ridership has increased to approximately 1,900 riders per day, making the A-Train the twenty-fifth most-ridden commuter rail system in the country.

Rolling stock
DCTA placed an order for 11 Stadler GTW 2/6 DMUs in 2010. The first of the new trains were delivered in late 2011 for testing prior to their entry into service. The full order was fulfilled by August 2012, and in September 2012 the new units replaced the Budd DMUs leased from TRE.