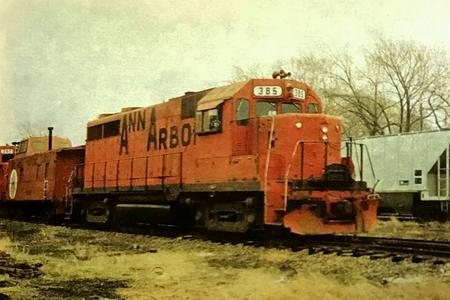 Ann Arbor Railroad (1988)
The Ann Arbor Railroad (reporting mark AA) is a Class III Railroad that operates fifty miles of track from Toledo, Ohio to Osmer, Michigan. The railroad is operated by Watco Companies and is based out of Toledo, Ohio. Prior to Watco Companies, the railroad was operated by the Ann Arbor Acquisition Corporation from 1988 to 2013, by the Michigan Interstate Railway Company from 1977 to 1988, and as a privately owned enterprise prior to 1977.

Current Operations
The Ann Arbor Railroad operates 83 miles of track between its main terminal, Ottawa Yard, in Toledo, Ohio and Ann Arbor, Michigan, the interchange point with the Great Lakes Central Railroad and Norfolk Southern Railway. A branch line known as the Saline Branch stretches four miles from Pittsfield, Michigan to Saline, Michigan. The Saline Branch has been used in the past to serve the Faurecia Automotive Components Plant located in Saline, Michigan but is not currently being used in revenue service. The Ann Arbor Railroad also leases and operates an industrial lead in Toledo, Ohio owned by the Norfolk Southern Railway. Much of what the railroad transports is "bridge traffic" and is received at either end of the railroad and transported for interchange with another railroad at the opposite terminal. A variety of different cargoes are transported ranging from grain to liquefied petroleum gas to wooden poles. In Toledo, Ohio, the railroad serves Chrysler transporting finished vehicles from the Toledo Complex.