The history of the Ann Arbor Railroad (AA) began with two companies organized in 1869 and 1872 to build a railroad between Toledo, Ohio and Ann Arbor, Michigan, approximately 45 miles. The Panic of 1873 destroyed one of those two companies; it took another 20 years and 12 companies, most of them named Toledo, Ann Arbor & something, for the railroad to reach the eastern shore of Lake Michigan at Elberta, Michigan. (The Toledo-Elberta line was the railroad's sole route until the 1960s, when it acquired its only branch, a 4 mile New York Central Railroad remnant from Pittsfield to Saline, Michigan.) From Elberta, across a small inlet from Elberta, the Ann Arbor operated train ferry lines to Kewaunee and Manitowoc, Wisconsin, and Menominee and Manistique, Michigan. The AA was incorporated in 1895 as a reorganization of the Toledo, Ann Arbor and North Michigan Railway.

The Detroit, Toledo & Ironton Railway (DT&I) obtained control of the AA in 1905 but sold its interests in 1910. In 1911 the AA purchased all the capital stock of the Manistique & Lake Superior Railroad (M&LS), which extended north from the Manistique, Michigan, to connections with the Duluth, South Shore & Atlantic Railway and the Lake Superior & Ishpeming Railroad.

In 1925 the Wabash Railroad, which was controlled by Pennsylvania Railroad (PRR) interests, acquired control of the AA. By 1930 it held more than 97% of AA's stock. AA was in receivership from December 4, 1931, to January 1, 1943 but did not reorganize. Never a major passenger carrier, AA discontinued its last passenger train in 1950 and gave its to full attention to freight service, which was largely made up of through freight using the Lake Michigan ferries to bypass Chicago and take advantage of lower rates. The railroad was completely dieselized by 1951. In 1963, the Wabash sold the AA to the DT&I (which was owned by the Wabash and the PRR). The M&LS and the connecting 100 mi (160 km) train ferry route were abandoned in 1968. In 1970 the Interstate Commerce Commission authorized abandonment of the ferry route between Frankfort and Menominee (80 miles) and the facilities at Menominee.

On October 16, 1973, AA declared bankruptcy. AA ceased operation as a railroad on April 1, 1976; Conrail assumed operations that day. The state of Michigan then purchased the railroad from the DT&I and arranged for its operation by Michigan Interstate Railway. The remaining train ferry lines from Elberta to Manitowoc (79 miles) and Kewaunee (60 miles) ceased operation in April 1982. In 1983 because of disputes over terms and payments, the operation was split among three railroads:

In 1984 T&SB took over MN's portion of the AA, and on October 7, 1988 a new Ann Arbor Railroad began operating the portion south of Ann Arbor; the Great Lakes Central Railroad (the former T&SB) currently serves the remaining portions of the line. Some sections have been abandoned: from Yuma to Elberta and Frankfort (approximately 45 miles), approximately 10 miles in Shiawassee County, Michigan (in three discontinuous sections), and the trackage around the now-demolished Cherry Street Station in Toledo.

Fleet
Eight boats were built for service with the AA and one was leased from the Grand Trunk Milwaukee Car Ferry Company.

The Ann Arbor Railroad
The Ann Arbor Railroad (reporting mark AA) was a former Class I Railroad that operated from Toledo to Elberta, a distance of about 300 miles. From Elberta, the AA operated several car ferry routes until 1982. The AA was absorbed by Conrail on April 1, 1976 and then by the Michigan Interstate Railway Company on October 1, 1977. On September 30, 1982, Michigan Interstate Railway Company operations ceased north of Ann Arbor. The remaining portions of the AA from Ann Arbor to Elberta were split between the Tuscola and Saginaw Bay Railway, running from Ann Arbor to Alma, and the Michigan Northern Railway, running from Alma to Elberta. Today, the only portion of railroad operated under the AA name is the portion from Toledo to Ann Arbor. 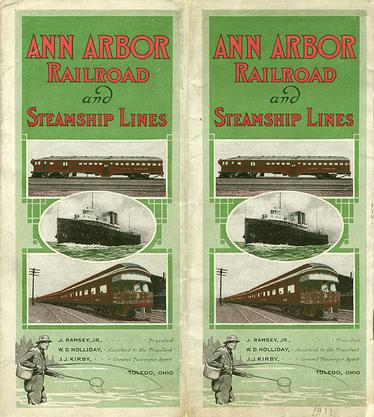 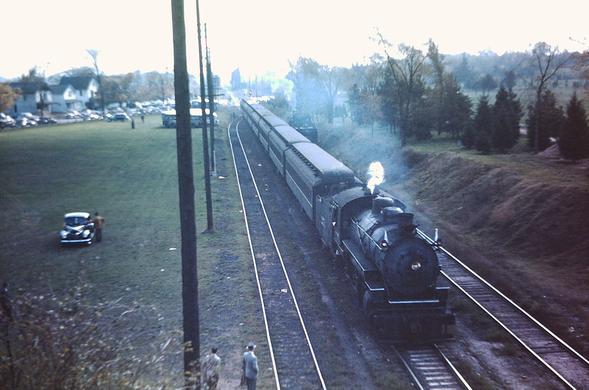