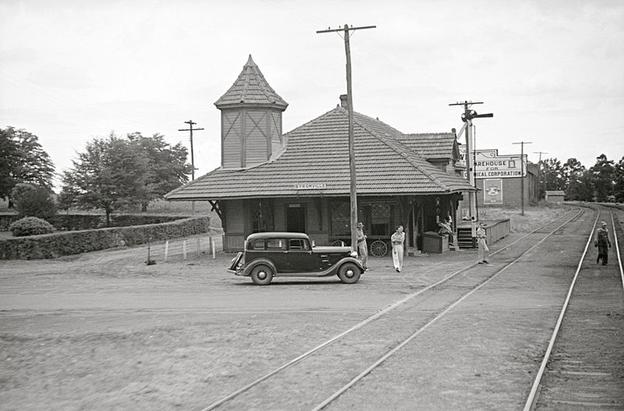 The AB&C Station at Byromville, Georgia.  Library of Congress

The Atlanta, Birmingham & Coast Railroad (reporting mark AB&C) was a Class I railroad. The Waycross Air Line Railroad was incorporated as a logging railroad in 1887. By the end of 1904 it had become the Atlanta & Birmingham Railway (A&B). In 1906 the newly created Atlanta, Birmingham & Atlantic Railroad (AB&A) absorbed the A&B. The new railroad built westward to Manchester, Georgia, and from there to Atlanta and to Birmingham, reaching both cities in 1908. The Atlanta, Birmingham & Coast Railroad (AB&C) was incorporated November 22, 1926, to acquire the properties of the AB&A. It was absorbed into the Atlantic Coast Line Railroad in 1945. Acquisition of the AB&C gave the ACL a route into Atlanta and Birmingham, as well as connections with ACL affiliates L&N and the Nashville, Chattanooga & St. Louis Railway, and a chance to participate more fully in Midwest-to-Florida traffic.

The AB&C was controlled by the Atlantic Coast Line Railroad, which owned a majority of the stock. In 1944 it reported 763 million net ton-miles of revenue freight and 33 million passenger-miles; at the end of that year it operated 639 miles of road and 836 miles of track.

In 1946 the AB&C was bought by the ACL and then became the latter company's Western Division. According to historical sources there are no surviving AB&C 2-8-2 "Mikado"-type locomotives.