Atlantic City Railroad
The Atlantic City Railroad was a Philadelphia and Reading Railway subsidiary that became part of Pennsylvania-Reading Seashore Lines in 1933. At the end of 1925 it operated 161 miles of road on 318 miles of track; that year it reported 43 million ton-miles of revenue freight and 204 million passenger-miles.

History
Effective 1 April 1889, the Philadelphia and Reading Railway consolidated all of its railroads in Southern New Jersey into the Atlantic City Railroad.

Speed Records
On 20 July 1904, the regularly-scheduled train no. 25, which ran from Kaighn's Point in Camden, NJ to Atlantic City NJ, with Philadelphia and Reading Railway class P-4c 4-4-2 No.334 and 5 passenger cars, set a speed record. It ran the 55.5 miles in 43 minutes at an average speed of 77.4 mph. The 29.3 miles between Winslow Jct and Meadows Tower (outside of Atlantic City) were covered in 20 minutes at a speed of 87.9 mph. During the short segment between Egg Harbor and Brigantine Jct, the train was reported to have reached 115 mph.

Predecessor Railroads
Camden, Gloucester & Mt. Ephraim Railway
Incorporated on 17 June 1873 by a group from Gloucester City, which wanted a rail line to link the busy passenger ferry landing at Kaighn’s Point in Camden to the Gloucester City industrial area 3.9 miles (6.3 km) away, then from that point another 1.3 miles (2.1 km) to Mount Ephraim Borough. A 3 ft (914 mm) narrow gauge was required, as much of the right of way used existing city streets with sharp curves. Work began in January, 1874 and the line from Kaighn’s Point to Gloucester City opened on 14 February 1874. The line to Mount Ephraim Borough opened in May 1876. In the middle of November, 1884, the Philadelphia and Reading Railway acquired the Camden, Gloucester & Mt Ephraim Railway. The Philadelphia and Reading Railway converted the track to 4 ft 8 1⁄2 in (1,435 mm) standard gauge in 1885.

Williamstown and Delaware River Railroad
In the summer of 1883, the Williamstown & Delaware River Railroad track was laid to Glassboro. Now the line was 15.73 miles long. Also in 1883 a branch 1.20 miles long was built in Glassboro NJ as the Glassboro Railroad to the Whitney Brother’s glass works. The Philadelphia and Reading Railway acquired full control on 4 December 1885. In 1887 a new extension was built to Mullica Hill NJ.

Railroads acquired in 1901
The Atlantic City Railroad was reincorporated on 14 June 1901 as a merger with other railroads:

Camden County Railroad
The Camden County Railroad was incorporated on 17 September 1889 with the purpose of extending the ACRR's Gloucester Branch ex Camden, Gloucester & Mt Ephraim Railway between Mount Ephraim Borough and Spring Mills, home of the Bateman Manufacturing Company where two plants were in use constructing farm equipment. As of 31 December 1890, 5 miles of railroad were completed south of Mt. Ephraim. The remaining 2.19 miles were finished on 10 May 1891. Spring Mills saw its first train during the third week in March, while the first carload of farm equipment and tools did not leave Bateman Manufacturing until the beginning of April. Stations were constructed along the Camden County Railroad at Bellmawr, Runnemede, Glendora, Chews Landing formerly South Glendora, Blenheim, Blackwood, and Spring Mills, renamed Grenloch (in Gloucester Township, New Jersey ) upon completion of the line. After construction was complete, the Camden County Railroad, which had been established with the sole purpose of constructing this extension, was leased to the Atlantic City Railroad. Atlantic City Railroad Timetable No. 3, effective 14 April 1892, was the first to show trains operating on the Gloucester Branch between Mt. Ephraim and Grenloch.

Cape May, Delaware Bay and Sewell's Point Railroad
This particular line existed from 1863 until the 1920s, and ran from Sunset Beach in Lower Township, around the Point to South Cape May (now known as South Meadows), into Cape May City, out to Sewell’s Point (now the Coast Guard Training Center), and back around to Schellenger’s Landing, where visitors could then connect to Philadelphia-bound trains.

Winslow Junction to Tuckahoe, Sea Isle City and Cape May.

Railroads acquired in the 1930s
Stone Harbor Railroad
Acquired in April 1932, the SHRR ran from Cape May Court House to Stone Harbor; it was merged with the PRSL in 1936.

Wildwood and Delaware Bay Short Line Railroad
Acquired in July 1930, the W&DBSLRR ran from Wildwood Junction to Wildwood; it was merged with the ACRR (by then PRSL) in 1934.

May 1882 William Massey sells the Pleasantville & Ocean City Railroad to the West Jersey and Atlantic Railroad.

Brigantine Railroads
August 7, 1889 Brigantine Beach Railroad incorporated in New Jersey to build from Pomona on the Camden and Atlantic Railroad to Brigantine Island.

April 21, 1890 Pomona Beach Railroad incorporated in New Jersey to build from Camden and Atlantic Railroad to the Atlantic City Railroad at Pomona, to connect the Brigantine Beach Railroad with the ACRR.

1893 Brigantine Transit Company built as an electric trolley line, The road extends along Brigantine Beach NJ a distance of six and one quarter miles.

On 15 July 1933, The Atlantic City Railroad leased the West Jersey & Seashore Railroad and changed its name to Pennsylvania-Reading Seashore Lines . 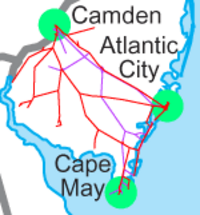 Route of the Atlantic City Railroad. 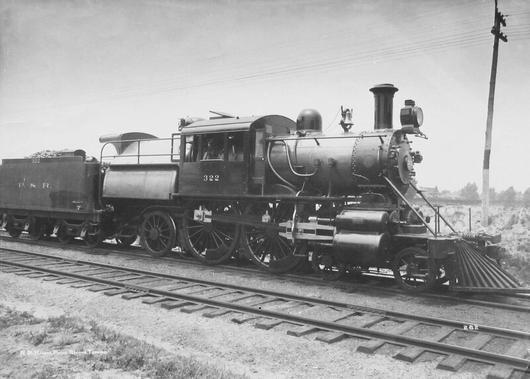