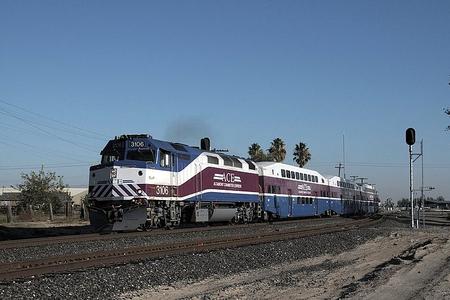 Service began on October 19, 1998, with two weekday round trips. A third round trip was added in May 2001, followed by a fourth round trip in October 2012. As of 2018, average weekday ridership is 5,900. Under the ACEforward program, a number of improvements to the service are being considered. These include a rerouted line through Tracy, an extension to Modesto and Merced, and connections to BART at Union City and Tri-Valley.

History and funding
Planning
By the 1980s, three rapidly growing areas in California - Silicon Valley, the Tri-Valley, and the middle part of the Central Valley - were poorly connected by public transit, even as Interstate 580 and Interstate 680 became more congested. The three areas had connections to San Francisco and Oakland via Caltrain and the Amtrak San Joaquin (and later BART and Capitol Corridor trains), but commuting from the Central Valley and Tri-Valley to Silicon Valley required using a car or limited bus service. In 1989, the San Joaquin Council of Governments, Stockton Chamber of Commerce, and the Building Industry Association of the Delta started work on a 20-year transportation plan for their section of the Central Valley. In November 1990, San Joaquin County voters passed Measure K, a half-cent sales tax to fund a variety of transportation improvements. The highest-priority project was the establishment of passenger rail service to San Jose.

In 1995, San Joaquin County and seven cities along the route formed the San Joaquin Regional Rail Commission (SJRRC) to oversee the creation of the service. In May 1997, the Altamont Commuter Express Joint Powers Authority (ACE JPA) was formed by the SJRRC, Santa Clara Valley Transportation Authority (VTA), and Alameda Congestion Management Agency (ACMA). That agreement formalized financial support, administrative processes, and governance for the rail service. The operation is funded by a variety of state and federal sources, largely sales tax revenue collected by the three JPA signatories; farebox revenues account for about one-third of costs.

Cost sharing for capital projects, excluding stations, during the initial 36 months of service was determined by the JPA on a case-by-case basis and approved by each of the member agencies. The initial purchase of rolling stock, construction of stations, and other start-up costs, amounting to some $48 million, were covered primarily by Measure K funds. Station improvements are the responsibility of the county in which the station is located. ACE pays the owner of the right of way, Union Pacific Railroad, about $1.5 million per year; it also uses about 4 miles (6.4 km) of Caltrain track in San Jose. Service began on October 19, 1998, which two daily round trips running to San Jose in the morning and Stockton in the evening.

Service expansion
The original service used two trainsets, each with 4 bilevel coach cars, for a total seated capacity of 1120 passengers in each direction daily. In September 1999, the service reached 1000 daily riders per direction, resulting in many trains running at capacity. On February 21, 2000, a morning short turn between San Jose and Pleasanton was added using an existing trainset, giving Pleasanton and Fremont a third inbound train to alleviate the crowding on the two earlier trains. The trip was added after ACE funded $3 million in track improvements to reduce conflicts with Union Pacific freight trains and Amtrak Capitol Corridor trains. By early 2001, ACE regularly carried more than 700 daily standees. After additional equipment was bought, the "Turn-back Train" was replaced by a nearly-full-length trip originating at Lathrop-Manteca on March 5, 2001; trains also began stopping at Santa Clara station. Although the third train added 560 seats in each direction, it brought an immediate increase in 380 daily riders. ACE then planned to add a fourth round trip later in the year, with fifth and sixth round trips by 2006. However, by late 2001, the deepening dot-com recession was severely hurting ridership, and expansion plans were put on hold. On June 30, 2003, the ACE JPA was dissolved in favor of a Cooperative Services Agreement between the three member agencies.

On January 6, 2003, ACE introduced the Stockton Solution Shuttle, allowing Stockton passengers to use the ACE trip which terminated at Lathrop/Manteca. The trip was extended to Stockton on August 1, 2005. At that time, service to Santa Clara was suspended to allow for the construction of a second platform and pedestrian tunnel at the station. At this time, three Amtrak Thruway Motorcoach trips connecting to the San Joaquin - one to San Jose and two to Stockton - were open to ACE riders.

On August 28, 2006, ACE added a fourth round trip, which operated midday using one of the existing trainsets. On November 7, 2006, San Joaquin County voters approved a 20-year extension of Measure K. Suffering from reducing funding due to the Great Recession, ACE cut the lightly-used midday trip on November 2, 2009.

In March 2014, ACE opened a $65 million, 121,000 square feet (11,200 m2) maintenance facility in Stockton. On July 1, 2015, management and governance of the San Joaquin passed from Caltrans to the new San Joaquin Joint Powers Authority. The SJJPA has nominal control over the SJRRC, but delegates all responsibility over ACE to the SJRRC.

On March 7, 2016, an ACE train was derailed by a mudslide in Niles Canyon near Sunol. The front car plunged into the rain-swollen Alameda Creek. Fourteen passengers were injured, but fortunately there were no fatalities.

Future plans
In association with the California High-Speed Rail (CAHSR) project, the ACE system had been planned to be dramatically upgraded and expanded. Beginning around 2008, initial plans called for the Altamont Corridor Rail Project to produce a high speed rail "Super ACE" capable of halving the travel time between the endpoints.

As the CAHSR project was scaled back and rerouted to Pacheco Pass several years later, these plans were replaced with the more modest ACEforward program. The San Joaquin Regional Rail Commission issued a notice of intent to proceed with an Environmental Impact Statement in June 2013; this was released in 2017 and prioritized goals as either long term or short term. Short term goals included track improvements, a possible reroute through downtown Tracy including new stations, a West Tracy station, and a new extension to Modesto in addition to additional daily round trips. Long term goals included upgrades to the existing corridor to allow as many as 10 daily round trips, extension to Merced, tunnels under Altamont Pass, and electrification of the line from Stockton to San Jose.

Also to be studied were possible connections with BART at Union City or Livermore via traditional ACE rail, diesel multiple units, or bus bridges. This connection is likely to be facilitated by the Tri-Valley-San Joaquin Valley Regional Rail Authority.

The state senate allocated $400 million in revenue from a gas tax increase to ACEforward expansion. ACE received Road Repair and Accountability Act funds in order to initiate Saturday service in January 2018, and was awarded $500.5 million in the following April for expanded service to Ceres and Sacramento to provide more rail service and connections within the Central Valley. Service is expected to begin from Ceres by 2023 with interim bus bridge service to Merced until that segment of Union Pacific right-of-way is upgraded. Four trains will depart Ceres in the mornings, and one train may make the complete run to San Jose with others transferring passengers at Lathrop.

Service
As of August 2016, ACE operates four daily round trips, all of which run westbound in the morning and eastbound in the evening. Trains are scheduled to make the 85-mile (137 km) one-way trip in 2 hours 12 minutes, an average speed of 39 miles per hour (63 km/h).

The route runs through Niles Canyon, parallel to the Niles Canyon Railway, Highway 84, and the Hetch Hetchy Aqueduct. The line passes through a 0.75-mile (1.21 km) long tunnel which cuts off one of the canyon's horseshoes. This tunnel was modified from its original configuration to accommodate intermodal double-stack freight trains. However, this left the track in poor condition, reducing speeds from 45 mph (72 km/h) to 25 mph (40 km/h) in the summer and as low as 10 mph (16 km/h) during the rainy season. The San Joaquin Regional Rail Commission plans to rehabilitate the tunnel.

East of Pleasanton and Livermore, the line runs through the Altamont Pass on the original Feather River Route. After crossing the California Aqueduct and the Delta-Mendota Canal into the Central Valley, skirting the southern edge of Tracy. It then turns north between Lathrop and Manteca and runs to Robert J. Cabral Station in Stockton.

Tickets and fares
ACE tickets are available at select stations and on ACE's web site. Distance-based fares are available in one way, round trip, 20 trip, weekly, and monthly passes.

Notes: To be delivered beginning in December 2019. 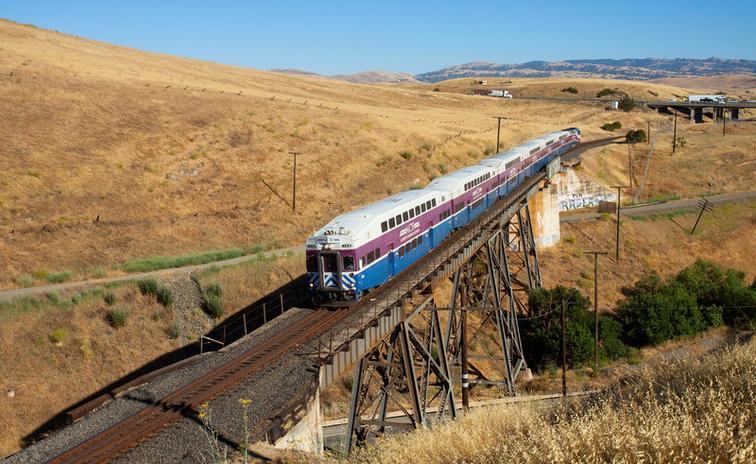 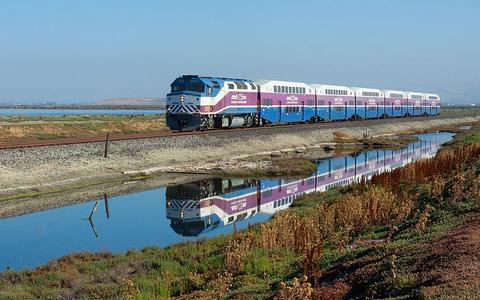 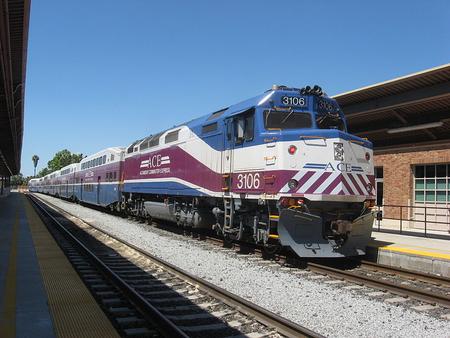