The Atlantic Coast Line served the Southeast, with a concentration of lines in Florida. Numerous named passenger trains were operated by the railroad for Florida-bound tourists, with the Atlantic Coast Line contributing significantly to Florida's economic development in the first half of the 20th century.

History
19th century
The history of the Atlantic Coast Line (ACL) began in 1830 with the organization of the Petersburg Railroad, which opened between its namesake city in Virginia and the north fork of the Roanoke River opposite Weldon, North Carolina. The Richmond & Petersburg Railroad (R&P) was organized in 1836 and formed a connection with the Petersburg Railroad in 1838, after an initial period during which the two companies interchanged freight and passengers with riverboats but not with each other.

After the Civil War, William T. Walters of Baltimore gradually acquired control of the W&W, W&M, North Eastern, Petersburg, and R&P railroads, forming a route known as the Atlantic Coast Line — an association of more or less independent railroads. In 1889 Walters formed a holding company to control them; it was renamed the Atlantic Coast Line Company in 1893. 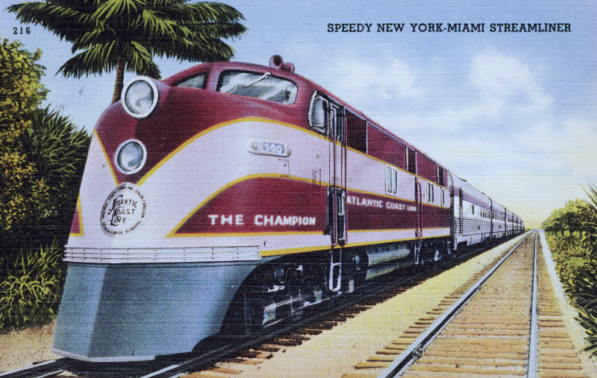 20th century
After the turn of the century ACL grew quickly into a large system of railroads, some leased, some controlled, some wholly owned. With the acquisition in 1902 of the Plant System (the Savannah, Florida & Western Railway and its leased lines and subsidiaries, plus steamship lines and hotels), ACL expanded south from Charleston, South Carolina into Georgia and Florida. Henry B. Plant had been superintendent of the Adams Express Company at the beginning of the Civil War. In 1861 he organized Southern Express, which much later became a component of Railway Express Agency. In 1879 Plant acquired the Atlantic & Gulf Railroad, whose main line ran from Savannah to Bainbridge, Georgia. Plant also reorganized it as the Savannah, Florida & Western (SF&W) and constructed several lines: west from a point of a few miles east of Bainbridge to Chattahoochee, Florida, to connect with a Louisville & Nashville Railroad (L&N) predecessor; southeast from Waycross, Georgia to Jacksonville, Florida; and south from Live Oak, Florida to Gainesville. In 1893 the Plant System absorbed the South Florida Railroad (Sanford-Port Tampa) and in 1899, the Jacksonville, Tampa & Key West (Jacksonville-Sanford). Among the other components of the Plant System were the Charleston & Savannah, the Brunswick & Western (Brunswick through Waycross to Albany, Georgia), and the Alabama Midland (Bainbridge to Montgomery, Alabama). All three were merged with the SF&W in 1901. That same year a cutoff was constructed from Jesup to Folkston, Georgia, bypassing Waycross.

Also in 1902 ACL acquired control of the L&N, which in turn controlled the Nashville, Chattanooga & St. Louis Railway. Later ACL and L&N jointly leased the Carolina, Clinchfield & Ohio and formed the Clinchfield Railroad to operate it. ACL and L&M also leased the railroad property of the Georgia Railroad & Banking Company (closely affiliated with the Atlanta & West Point and the Western Railway of Alabama) and formed the Georgia Railroad to operate it. In 1926 ACL acquired control of the newly reorganized Atlanta, Birmingham & Coast Railroad (AB&C), which gave it lines from Waycross to Atlanta and Birmingham, where it connected with L&N. ACL merged the AB&C in 1945.

Another member of ACL's family was the Charleston & Western Carolina Railway (C&WC) (Port Royal, South Carolina through Augusta, Georgia to Anderson, Greenville and Spartanburg, South Carolina). The first portion of the railroad, between Augusta and the coast, was financed by the Georgia Railroad & Banking Company. However, the Central Railroad & Banking Company (Central of Georgia Railway) gained control in 1881 not so much to stop the flow of traffic from Georgia to Port Royal as to tap inland South Carolina for the Port of Savannah. Central of Georgia lost the railroad in 1894; ACL gained control in 1897. By 1930 the C&WC was operated independently; its appearance was Atlantic Coast Line — secondhand ACL steam locomotives, including Pacifics for freight service, and silver and purple diesels. ACL finally merged the C&WC in 1959. Connecting with the C&WC at Laurens, South Carolina was another railroad controlled by ACL, the Columbia, Newberry & Laurens Railroad, a 75-mile line joining the three cities of its name. The ACL acquired the East Carolina Railway in 1935, running south from Tarboro to Hookerton, although the 12-mile extension to Hookerton was abandoned in 1933.

Later history
The Atlantic Coast Line Railroad (ACL) was considered one of the three strong railroads of the South (the other two were the L&N and the Southern). The opening of the Perry Cutoff in the last quarter of 1928 between Thomasville, Georgia and Dunnellon, Florida shortened considerably the route between the Midwest and west coast points. ACL advertised itself as the "Standard Railroad of the South," and its route between Richmond and Jacksonville was fully signaled and mostly double track, much more than the parallel Seaboard Air Line Railroad (SAL) could boast. As with the Pennsylvania Railroad (PRR), which advertised itself as the "Standard Railroad of the World," there were some nonstandard items. Two are notable. ACL was one of the few railroads to consider the Pacific a dual-purpose engine (they were designed for passenger service vs. heavy-duty freight service), but the profile of its main line was such that a 4-6-2 could move freight at good speed. The other was the color choice for its diesels — purple (president Champion McDowell Davis, nicknamed "Champ," liked purple). The 4-6-2s yielded to EMD E-units for passengers and EMD F-units for freight, and purple on the diesels eventually gave way to black.

During the Great Depression ACL's freight traffic declined by approximately 60 percent but the railroad survived without declaring bankruptcy; its success has been attributed to its leadership and careful financial practices, as well as owning 51% of the L&N, which remained strong through the Depression.

During World War II ACL's passenger traffic increased 200 percent and freight traffic 150 percent. The railroad provided an alternate to coastal shipping, threatened by German submarines, and also served the fast-emerging military industry in the Southeast. In 1942 Champion McDowell Davis became president of the ACL and immediately began an improvement program that finished in the mid-1950s, including the rebuilding of several hundred miles of track, the installation of modern signaling systems and improvements to freight yards. The railroad spent over $268 million ($3,868,260,692 today) in upgrading its physical plant during this period.

In 1955 the ACL announced its departure from Wilmington, North Carolina and made the move of its headquarters from Wilmington to Jacksonville, Florida in 1960. Jacksonville was selected from three candidate cities, the other two being Savannah and Charleston. Construction of the new office complex was finished in July 1960, with the move from Wilmington completed over the following weeks.

Merger
In 1958 the ACL and SAL announced they were considering merger, and in 1960 they petitioned to merge as the Seaboard Coast Line Railroad. The two companies served much the same territory, and they had 75 common points. The principal argument for merger was the elimination of duplicate lines and facilities. The merger was approved by the Interstate Commerce Commission and took effect on July 1, 1967. 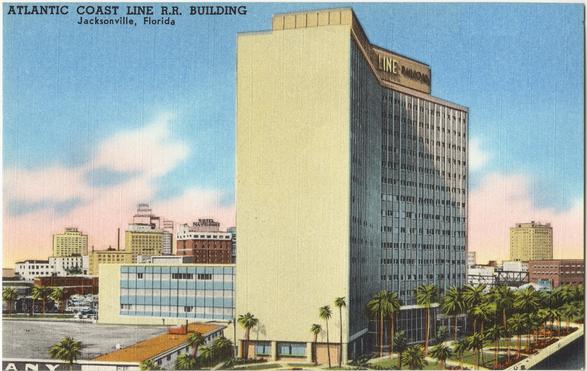 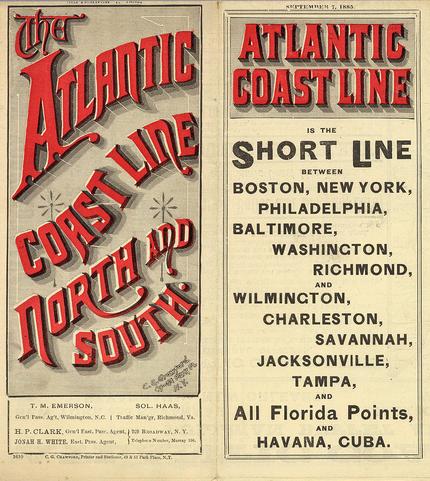 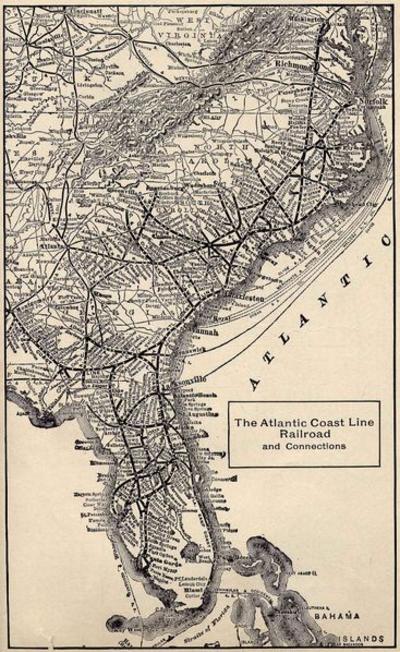 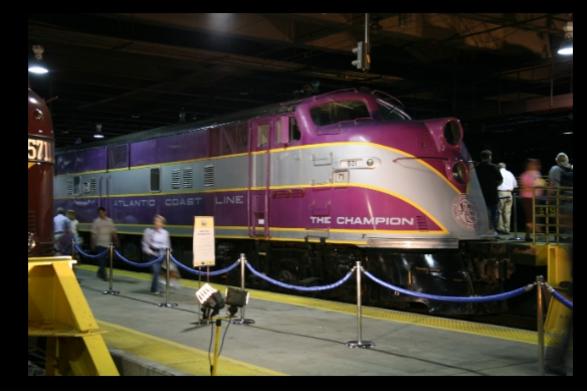 An Atlantic Coast Line timetable, circa 1885.

ACL EMC E3 No. 501 pulled the Champion; it currently resides at the North Carolina Transportation Museum.

Freight
During its early years, the ACL handled mostly seasonal agricultural products, but by World War II its freight traffic had become more diverse. During the 1950s, around 44% of all freight traffic consisted of manufactured and miscellaneous items, while bulk traffic like coal and phosphates also expanded during this time. During the 1950s, the ACL acquired some 13,000 new freight cars, to be used on high-speed trains offering reduced running times compared to earlier equipment. This allowed the railroad to remain competitive in the face of competition from the Interstate highway system.

Passenger
ACL carried the majority of Florida-bound passengers, turning Miami passengers over to the Florida East Coast Railway (FEC) at Jacksonville but carrying west coast passengers all the way — to Tampa, St. Petersburg, Sarasota, Fort Myers, and Naples. ACL also participated in most of the Midwest-to-Florida passenger train routes. In 1939, in response to SAL's popular streamliner, the Silver Meteor, ACL launched its first streamlined train, the all-coach Champion (named after ACL president Champion McDowell Davis). ACL invested heavily in its passenger fleet after World War II but passenger revenue fell from $28.5 million in 1946 ($344,674,915 today) to $14.1 million in 1959 ($114,071,575 today). Until the 1967 merger, the railroad continued to maintain and improve its passenger service.

Notable passenger trains
All of ACL's New York-Florida trains operated over PRR tracks north of Washington, D. C., then via the Richmond, Fredericksburg & Potomac Railroad from Washington to Richmond. Tampa/St. Petersburg trains used ACL rails south of Richmond. Trains for Miami operated over the FEC from Jacksonville to Miami, but after passenger service on the FEC ended with a long-lasting strike in 1963, ACL transferred its Miami-bound trains to SAL rails at Auburndale, Florida.

In the 1946 musical, "The Harvey Girls", the ACL is name-checked in the song, "On the Atchison, Topeka and the Santa Fe".