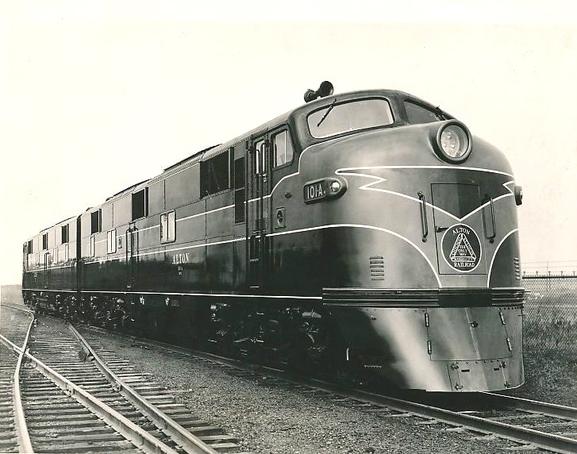 Main lines included Chicago to St. Louis and a branch to Kansas City. The former is now part of Union Pacific, with Metra Heritage Corridor commuter rail service north of Joliet (owned by the Canadian National Railway but used by UP). The latter is part of the Kansas City Southern Railway system.

History
The earliest ancestor to the Alton Railroad was the Alton and Sangamon Railroad, chartered February 27, 1847 in Illinois to connect the Mississippi River town of Alton to the state capital at Springfield in Sangamon County. The line was finished in 1852, and as the Chicago & Mississippi Railroad extended to Bloomington in 1854 and Joliet in 1855. Initially trains ran over the completed Chicago and Rock Island Railroad to Chicago.

The Joliet and Chicago Railroad was chartered February 15, 1855 and opened in 1856, continuing north and northeast from Joliet to downtown Chicago. It was leased by the Chicago & Mississippi, providing a continuous railroad from Alton to Chicago. In 1857 the C&M was reorganized as the St. Louis, Alton and Chicago Railroad, and another reorganization on October 10, 1862, produced the Chicago and Alton Railroad. The C&A chartered the Alton and St. Louis Railroad to extend the line to East St. Louis, opened in 1864, giving it a line from Chicago to East St. Louis. 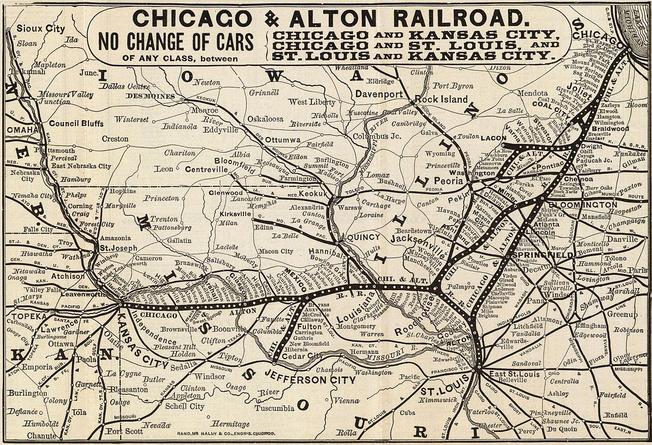 Passenger Service Notables
The first sleeping car designed by George Pullman was built in the C&A's Bloomington shops and introduced on September 1, 1859 on the Chicago-St. Louis route. Sleeping cars were operated over most routes between Chicago, Peoria, Bloomington, St. Louis and Kansas City in principal train consists. Successor Gulf, Mobile & Ohio operated Chicago-St. Louis sleeping car service until December 31, 1969, the last railroad to do so between the two cities.

The first dining car, the Delmonico, named for the famous New York restaurant, was built by Pullman in the Aurora, Illinois shops of the Chicago, Burlington & Quincy. The car first appeared in regular service over the C&A's Chicago-St. Louis mainline. Two other Pullman diners built at the same time, the Tremont, and the Southern, were leased, providing dining car service on all three principal C&A Chicago-St. Louis trains. Dining cars were a part of Chicago-St. Louis train consists until May 1, 1971, with the takeover of passenger service by Amtrak.

Stations in Chicago
First entry of C&A passenger trains from Joliet into Chicago was over the Chicago & Rock Island to that railroad's depot (later La Salle Street Station). Briefly, passenger trains were moved over to the Illinois Central depot. On December 28, 1863, the leased J&C and Pittsburgh, Fort Wayne and Chicago Railway came to an agreement where the J&C would use the PFW&C's terminal at Madison Street, later becoming a tenant of Union Station, which opened in 1881. In 1924, with the completion of a new Union Station between Adams and Jackson streets, C&A became a tenant and its successors used Union Station until the takeover by Amtrak.